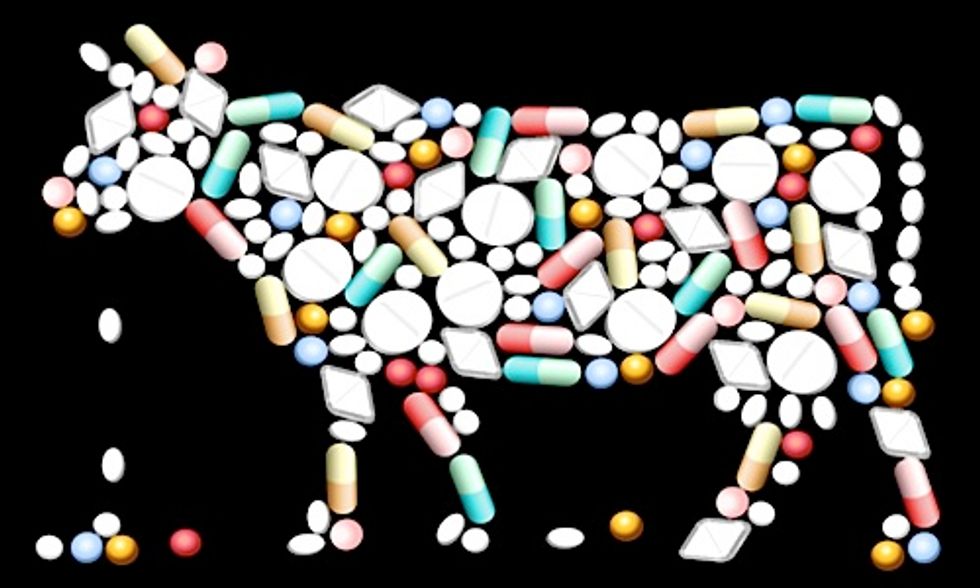 The U.S. Food and Drug Administration (FDA) quietly allowed 30 potentially harmful antibiotics—including 18 rated as "high risk"—to remain on the market as additives in farm animal feed and water, despite an internal review that raised significant red flags, according to agency records obtained by the Natural Resources Defense Council (NRDC).

The data show the use of these drugs in livestock likely exposes humans to antibiotic resistant bacteria through the food supply. The FDA’s scientific reviews of these antibiotics occurred between 2001 and 2010, yet the drugs remain approved and, in many cases, on the market for use in industrial animal agriculture operations.

"The evidence is clear—drugmakers never proved safety," said Carmen Cordova, NRDC microbiologist and lead author of the new analysis. "And FDA continues to knowingly allow the use of drugs in animal feed that likely pose a ‘high risk’ to human health."

"That’s a breach of their responsibility and the public trust,” continued Cordova. “This discovery is disturbing but not surprising given the FDA’s poor track record on dealing with this issue. It’s just more overwhelming evidence that FDA—in the face of a mounting antibiotic resistance health crisis—is turning a blind eye to industry’s misuse of these miracle drugs.”

The FDA’s documents, captured in the analysis Playing Chicken with Antibiotics, show safety reviews of various drugs in the penicillin and tetracycline drug classes—antibiotics considered important to human medicine, which together comprise nearly half of all antibiotics used in animal agriculture in the U.S. The documents were acquired through a Freedom of Information Act (FOIA) lawsuit filed by NRDC and reveal:

The significance of these findings extends far beyond the 30 antibiotic feed additives reviewed. A large body of scientific work on bacterial cross- and co-resistance has established that the misuse of one antibiotic can actually lead to bacterial resistance to other antibiotics. Consequently, the 30 penicillin- and tetracycline-based animal feed additives in this analysis could reduce the effectiveness of a range of other medically important antibiotics that are solely used to treat people.

The FDA first recognized the risks from the use of antibiotics in animal feed in 1977 when it proposed to withdraw approvals for animal feed containing penicillin and most tetracyclines. NRDC won a lawsuit against the FDA for failing to follow through and address the threat posed by the misuse of penicillin and tetracyclines in the livestock industry. Instead of acting on their own scientific findings and heeding the court ruling, the FDA appealed, and a decision is now pending in the U.S. Court of Appeals for the Second Circuit, in New York.

The World Health Organization lists penicillins as critically important for human medicine and tetracyclines as highly important. Penicillins are commonly used to treat bacterial meningitis and syphilis in humans. Tetracyclines are commonly prescribed for eye infections, Lyme disease, gonorrhea and chlamydia. The FDA also recognizes both as highly important. Unfortunately, both penicillins and tetracyclines are no longer effective for treating some infections because of high levels of resistance in bacteria, brought on, in part, due to their widespread use in industrial farms. Increasing resistance to these drugs decreases the options available for human treatment.

The FDA’s failure to act on its own findings on the 30 reviewed antibiotic feed additives is unfortunately consistent with the agency’s decades-long history of failure to effectively deal with this issue. Today, 70 percent of all medically important antibiotics sold in the U.S. are sold for use in livestock production—not on humans. The FDA is responsible for regulating the use of antibiotics in animal agriculture, but has done little to address the growing misuse and overuse of these drugs by the industry since first recognizing the health risks nearly four decades ago.

In 1977, the agency itself concluded that feeding animals low doses of certain antibiotics used in human medicine, namely penicillin and tetracyclines, could promote antibiotic-resistant bacteria capable of infecting people, and posed a risk to human health. Since then, the science on the human health risks of these practices has only gotten stronger but drugs sales for livestock use have continued to trend upwards nearly unchecked.

Despite the FDA’s own scientific findings—and two federal court orders in 2012 resulting from NRDC litigation that require the FDA to act on the misuse of antibiotics on animals that are not sick—the FDA has never followed through. Instead, they've issued Voluntary Guidance 213: loophole-laden recommendations that offer no meaningful improvement over its lack of action over the last 36 years. Meanwhile, the FDA has appealed the court orders and a decision is pending the Second Circuit Court of Appeals.

For decades, leading health groups, medical doctors and other scientists from the American Academy of Pediatrics to Infectious Disease Society of America have sounded the alarm, stating that “overuse and misuse of important antibiotics in food animals must end, in order to protect human health.” These groups and others, including the Centers for Disease Control and the World Health Organization, warn that the overuse and misuse of antibiotics in animals that don’t need them can create dangerous drug-resistant “superbugs” capable of infecting humans.

This was originally posted to NRDC’s Media Center.