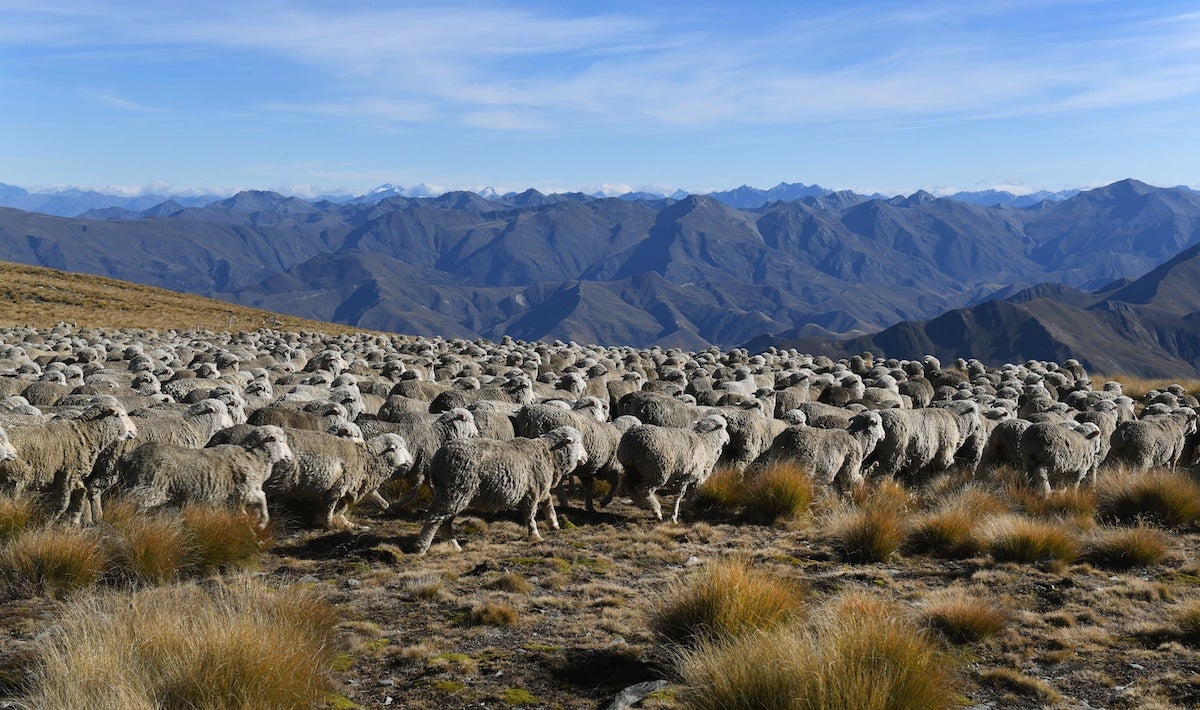 A flock of merino sheep on a farm in New Zealand. WILLIAM WEST / AFP via Getty Images

In New Zealand, sheep and cattle outnumber people. All that livestock passes gas, which means emitting more methane into the atmosphere. As such, the country has proposed to tax farmers for their livestock’s emissions.

New Zealand’s agriculture makes up almost half of the country’s greenhouse gas emissions. According to the BBC, there are about 5 million people in New Zealand, but there are 10 million cattle and more than 26 million sheep. Although New Zealand has an emissions trading scheme in place to minimize climate change, the agriculture industry was not included.

“We need to urgently cut emissions across all sectors of the economy – and that includes agriculture,” Climate Change Minister James Shaw said in a statement. “There is no question that we need to cut the amount of methane we are putting into the atmosphere, and an effective emissions pricing system for agriculture will play a key part in how we achieve that.”

The proposed plan would begin charging farmers for livestock emissions in 2025. Short- and long-lived farm emissions will be charged separately but calculated in the same way.

“We’ve been working with the government and other organizations on this for years to get an approach that won’t shut down farming in New Zealand, so we’ve signed off on a lot of stuff we’re happy with,” Andrew Hoggard, a dairy farmer and the national president of Federated Farmers of New Zealand, told the BBC.

“There are still the nuts and bolts to be hammered out, like who actually implements the scheme, so there’s still stuff to work through with the government,” Hoggard added.

The proposal includes incentives for farmers to cut emissions. For example, they may add seaweed to livestock feed to help reduce the amount of methane the livestock produce. Farmers can also plant trees to help offset their emissions.

New Zealand currently has a goal to reduce methane emissions from agriculture by 24% to 27% by 2050 and is set to decide on the proposal in December 2022. In the meantime, the government and farmers have more details to hammer out if they plan to move forward with this scheme. The agriculture industry and the public will also have opportunities to share their views on the proposal.

“It’s really important that we get this right,” Agriculture Minister Damien O’Connor said in a statement. “Customers around the world are demanding higher levels of sustainability in the products they buy, so there is the potential for real competitive advantage here if we can get this right and continue moving to sustainable farming systems that are ready to respond to a warming world.”

Scientists Can Now Track Agricultural Sulfur Runoff for More Sustainable Wine
As we strive for a more environmentally conscientious world, everything
By Cristen Hemingway Jaynes
Lake Tahoe Town to Replace July 4th Fireworks With More Eco-Friendly Alternative
Fourth of July firework shows are getting harder and harder
By Olivia Rosane
Supreme Court Restricts EPA’s Ability to Fight Climate Crisis
The Supreme Court has restricted the ability of the U.S.
By Olivia Rosane