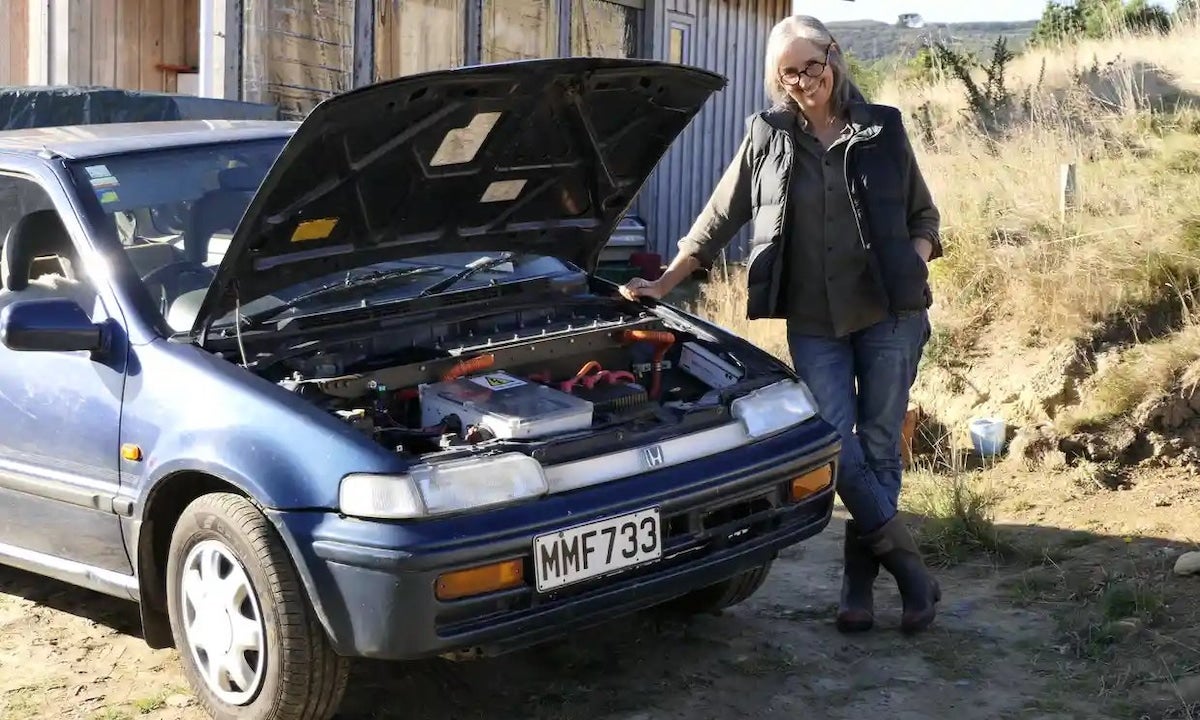 A New Zealand grandma has found a way to be the change she wants to see in the world.

Sixty-three year old Rosemary Penwarden converted an old Honda into an electric vehicle that she charges with home solar panels.

“I suppose I should thank the oil companies, like Anadarko, NZ oil and gas, Shell, OMV, Beach Energy… these are all companies that me and my group Oil Free Otago have been opposing for many years,” Penwarden told Stuff.co.nz. “It motivated me to become independent of oil, and show them they’re not needed here.”

Penwarden purchased the 1993 car from a wrecker’s inventory, removed the combustion engine and installed a new gearbox and electric engine in its place, The Guardian reported. She also added 24 batteries to the front of the car and 56 to the trunk. The car can travel 120 kilometers (approximately 75 miles) before it has to be charged, according to Stuff.co.nz. While Penwarden did the work herself, she also had help from other members of the Valley Workshop cooperative that she helped found.

“It [the car] sat in the workspace for close to two years, but once we got going on it, it took probably 8 to 10 months of pretty solid work,” she told Stuff.co.nz.

Penwarden said she expected her self-made car to pay for itself eventually, since she used to spend as much as $100 a week on gas, according to The Guardian. However, she said that she did not convert the car in order to save money and understood that not everyone has the funds and time to follow her example.

“Just to be able to show that it can be done is a priceless thing,” she said, as The Guardian reported. “The biggest thing is to help stop the biggest polluters as soon as possible – and nothing that we can do as individuals I think matters quite as much as that.”

Penwarden isn’t the only one in her community converting conventional cars into electric vehicles. Fellow Valley Workshop member James Hardisty owns a car conversion business called EV-lution, according to Stuff.co.nz. He said that he had converted around 15 cars, and the Toyota RAV4 he turned into an electric vehicle around 2010 still drives on the same battery.

“It’s great for the environment… you don’t have to worry about what’s happening in the world, if there is a war… if all the oil was to dry up tomorrow, we’d keep going,” he told Stuff.co.nz.