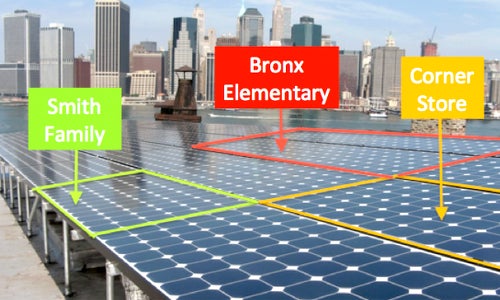 It’s not difficult to feel somewhat left out of the potential solar revolution if you’re not a home or property owner, but a New York State Assembly member hopes to change that.

State Energy Committee Chair Amy Paulin (D-88) has introduced the Shared Clean Energy Bill, which would allow renters, the owners of unsuitable roofs, schools and businesses to go solar through utility bill credits. The plan would be the 11th shared renewable plan in the U.S., following Vermont, Massachusetts and others.

“Today, solar is creating thousands of jobs in New York and pumping hundreds of millions of dollars into our economy all while building a cleaner, more resilient energy supply,” Paulin, the bill’s sponsor, said in a statement from Vote Solar. “Yet, a majority of our residents and businesses cannot participate in that growing solar marketplace simply because they do not own rooftops that are suitable for solar. This bill would make solar an option for renters and millions of other New Yorkers for the first time, in turn delivering more solar benefits to our state.”

This graphic shows how solar installations could become more inclusive of communities if a new bill is passed. Graphic credit: Vote Solar

The bill would let New York residents to subscribe to a local renewable energy project elsewhere in their community and receive credits on their utility bills in return. It’s not the same as having panels on your roof, but it gives more people a role in making communities more sustainable. That’s what excited people about the proposal, even those with fame.

“I’ve never been prouder to call myself a New Yorker as leader after leader steps forward on behalf of health and economic opportunity for all,” actor and activist Mark Ruffalo said. “The Shared Renewables Bill is moving forward with strong leadership in and outside Albany, but most importantly, it is moving forward on a road that all New Yorkers can walk, with access to stable, clean and affordable solar energy to power their homes and places of business, whether owned or leased.

“That means moving forward, together—with better health and economic opportunity in communities across the state, from Buffalo to Binghamton to the Bronx and everywhere in between.”

Gov. Andrew Cuomo began the year by pledging to spend a $1 billion on solar energy through the NY-Sun initiative. Two months earlier, outgoing New York City Mayor Mike Bloomberg announced that Freshkills Parks, once known as the world’s largest landfill, would be the site for the city’s largest solar array.

Now, renters and others from all over the state will feel included in future plans.

“Solar is delivering tremendous health, environmental and economic benefits to New York, but the traditional panels-on-your-roof approach simply doesn’t work for most of our energy consumers,” said Aaron Bartley, executive director of People United for Sustainable Housing (PUSH) Buffalo. “Families and businesses who rent and plenty of others are left in the dark. It’s time for a more inclusive approach to New York clean energy.

For more information on the benefits of solar energy – as well as some drawbacks – read here.