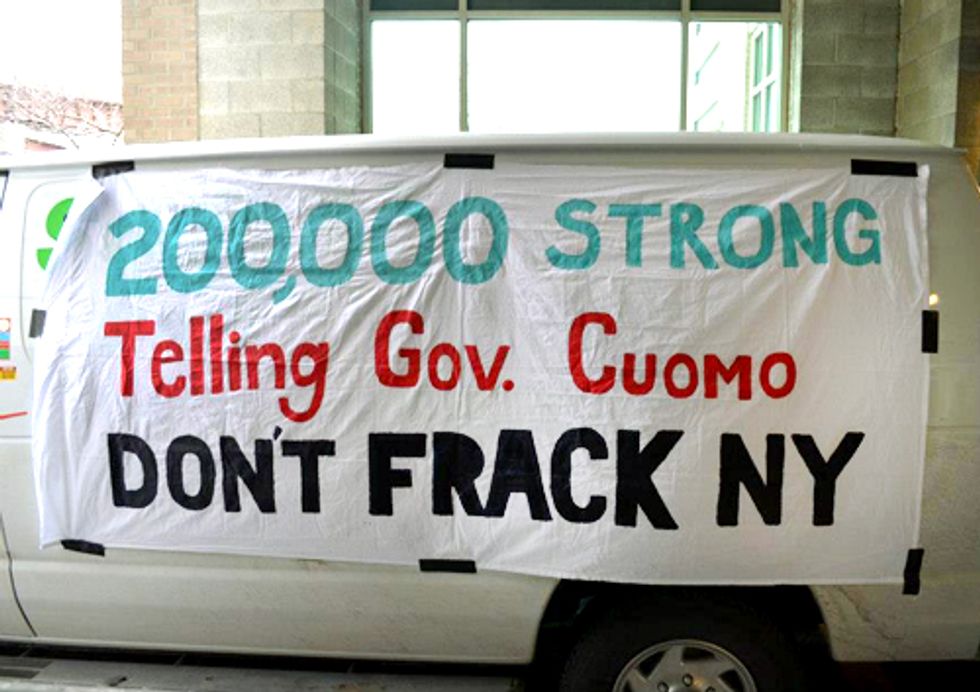 By the Jan. 11 deadline set by the state, concerned citizens filed more than 200,000 comments blasting the deficiencies in the draft regulations.

New York’s four-year effort to assess the safety of the controversial gas drilling practice known as fracking is broken. To fix it, the state must either declare a ban on fracking, or extend the moratorium now in place while it addresses the fundamental flaws in what has been, to date, an almost Kafkaesque regulatory process.

The environmental community is aghast at how New York is handling fracking. Many of us feel that we’ve never seen anything like the train wreck unfolding before us. And, it’s not just the greens who are crying foul—veteran Albany columnist Fred LeBrun recently observed that:

“The rulemaking process … has been from hell, an abomination. The public has been deceived, misdirected and kept utterly in the dark over where the state was heading concerning the most important environmental issue of this generation.”

Rarely has a government so thoroughly earned such bad press. LeBrun’s broadside came several days after state officials released a new round of draft fracking regulations; gave the public only 30 days to comment on them; and declined to disclose any details about its own private study of fracking’s health impacts.

Asking the public to comment on proposed regulations when state bureaucrats themselves haven’t finished evaluating whether fracking will lead to public health problems is unconscionable, especially when Christopher Portier, director of the federal Center for Environmental Health, admits that fracking has been a “disaster” in some communities and that we lack much of the basic information needed to know whether it can be done safely.

Another issue the State can’t seem to get right is whether fracking will truly benefit New York’s local economies and our upstate communities.

In November 2011, members of a state task force on fracking were invited to hear from a consultant hired by the New York Department of Environmental Conservation to analyze the economic and community impact of fracking. When asked why, in a 250-page report, the consultant had devoted only six pages to fracking’s documented economic and social downsides, the consultant replied that it had only been asked to study the benefits of fracking.

Following that shocking admission, State Environmental Commissioner Joe Martens conceded that the state’s socio-economic impact review was “a little thin” and promised that his agency would take a closer look at the costs of fracking to local communities.

Over a year later, we’re still waiting for that "closer look." All we know for sure is that the state basically disbanded its fracking task force soon after the disastrous meeting on economic issues and has released nothing since to show that it has come to grips with the evidence that fracking damages roads, degrades local character, harms tourism and agriculture and may even drive down a community’s long-term employment growth, economic diversity, educational attainment and ability to attract investment.

Fracking isn’t just a problem in the communities whose air, water and land it pollutes. Any hope that fracking will benefit the broader public, by adding to our domestic energy reserves, runs squarely into recent federal findings that the process releases so much methane into the atmosphere, it may actually cause more climate disruption than coal or oil.

Given all this controversy over the impacts of fracking, you’ve got to wonder why state officials have rushed out with new regulations when they haven’t even finished all of the relevant studies.

One theory is that New York’s administrative laws would require the Department of Environmental Conservation to start the whole process over again, if it doesn’t finalize its regulations by Feb. 28, and that may simply be too much to bear for an agency that has been so preoccupied with fracking for so many years.

The other possible explanation for the mad push to get these regulations out the door is even more troubling. What if, despite fracking’s negative impacts on air, water, health, climate and community character, pro-fracking officials in New York are simply bound and determined to give the drillers the green light, and they think it will be easier to do so if the public doesn’t have all the relevant studies during the official comment period?

Whatever the reason for this travesty, a lot of people are furious about it. By the Jan. 11 deadline set by the state, concerned citizens (many of whom had never protested anything before fracking) filed more than 200,000 comments blasting the deficiencies in the draft regulations. These comments confirm the sad truth—New York State has not been honest with itself or with the public about fracking’s impacts on public health, our economy and community character, or the global climate.

Fracking is too big, too risky and too important to get wrong. Thankfully, Governor Andrew Cuomo still has the chance to do the right thing. He can just say no to fracking, based on its numerous, well-documented problems. Alternatively, he can release all of the state’s studies on fracking—many of which are not even finished yet—and then give New Yorkers the chance to comment on a full record.

Or Governor Cuomo can just continue to press forward with the “rulemaking process from hell,” and approve fracking. If he does, he’ll forfeit any claim to the public’s trust on one of the defining issues of his administration.