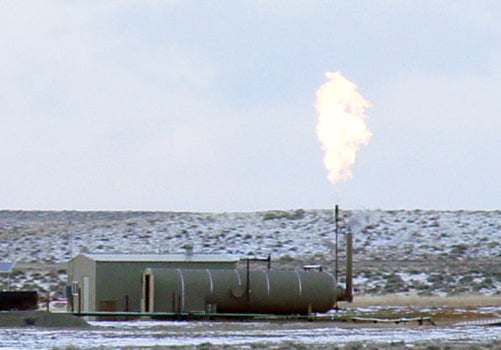 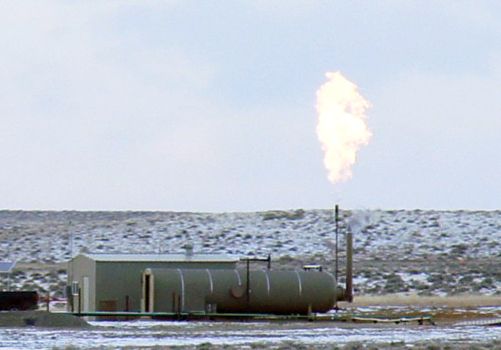 A Cornell study released last year, lead by Professor of Ecology and Environmental Biology Robert Howarth, was the first of its kind to study the global warming impact of natural gas extraction from shale deposits. The conclusion was that fracking releases up to 8 percent of the extracted methane directly into the atmosphere, and reports that all methane will contribute to 44 percent of global warming. Photo Andrew Michler

Attorney General Eric T. Schneiderman, leading a coalition of seven states, today notified the U.S. Environmental Protection Agency (EPA) of his intent to sue the Agency for violating the Clean Air Act by failing to address methane emissions from the oil and natural gas industry. EPA has determined that methane is a powerful climate change pollutant emitted by the industry in large quantities. Because of this, and the availability of affordable methods for controlling the industry’s methane emissions, Attorney General Schneiderman’s coalition charges that EPA violated the Clean Air Act when it largely ignored methane in recent updates to air pollution emission standards for the industry.

Methane is a very potent greenhouse gas. Pound for pound, it warms the climate about 25 times more than carbon dioxide. EPA has found that the impacts of climate change caused by methane include “increased air and ocean temperatures, changes in precipitation patterns, melting and thawing of global glaciers and ice, increasingly severe weather events—such as hurricanes of greater intensity—and sea level rise.” In 2009, EPA determined that methane and other greenhouse gases endanger the public’s health and welfare.

The EPA’s decision not to directly address the emissions of methane from oil and natural gas operations—including hydrofracking—leaves almost 95% of these emissions uncontrolled.

“We simply can’t continue to ignore the evidence of climate change or the catastrophic threat that unabated greenhouse gas pollution poses to our families, our communities and our economy,” Attorney General Schneiderman said. “While it is clear that methane from oil and natural gas development contributes substantially to climate change pollution, regulators have failed to require the industry to use available and cost-effective measures to control these emissions. Today, our coalition is putting EPA on notice that we are prepared to sue to force action on curbing climate change pollution from the oil and gas industry.”

The EPA has determined that oil and natural gas production wells, gathering lines, processing facilities, storage tanks and transmission and distribution pipelines emit more than 15 million metric tons of methane annually—the equivalent yearly climate change pollution of 64 million cars. As such, the industry is the single largest source of man-made methane emissions in the U.S., and the second largest industrial source of domestic greenhouse gas emissions behind only electric power plants.

The Clean Air Act requires EPA to set emission controls—known as “New Source Performance Standards” or “NSPS”—for industrial sectors that cause or significantly contribute to air pollution that endangers public health and welfare. In August 2012, EPA revised NSPS regulations for the oil and natural gas industry. These regulations included, for the first time, federal air emission standards for natural gas wells developed through hydraulic fracturing, or “fracking,” along with requirements for several other sources of pollution in the oil and gas industry that are currently not regulated at the federal level.

In today’s notice of intent to sue, Attorney General Schneiderman’s coalition charges that the EPA violated the Clean Air Act when it failed to address methane emissions in the August 2012 regulations. Specifically, the coalition argues that because EPA recognizes that methane endangers public health and welfare and is emitted in large quantities by the oil and gas industry—and has 18 years of data demonstrating that many methods of controlling these emissions are available and cost-effective—the Agency broke the law by deferring a decision on whether to set NSPS standards for methane emissions from the industry. The coalition’s notice states that it intends to file suit against EPA in federal district court, unless the Agency makes timely decisions on setting standards to curb these methane emissions from the oil and gas industry.

The Clean Air Act requires parties to provide EPA a 60-day notice of intent to sue under provisions of the Act. Joining Attorney General Schneiderman in today’s notice are the states of Connecticut, Delaware, Maryland, Massachusetts, Rhode Island and Vermont.

From severe droughts and heat waves to a string of devastating storms in the northeast over the last two years, it is becoming ever more apparent that increasing greenhouse gas pollution contributes to climate disruption in the U.S. and around the globe. Since taking office, Attorney General Schneiderman has established himself as a leader, both in New York and nationally, in the fight against climate change. For example: