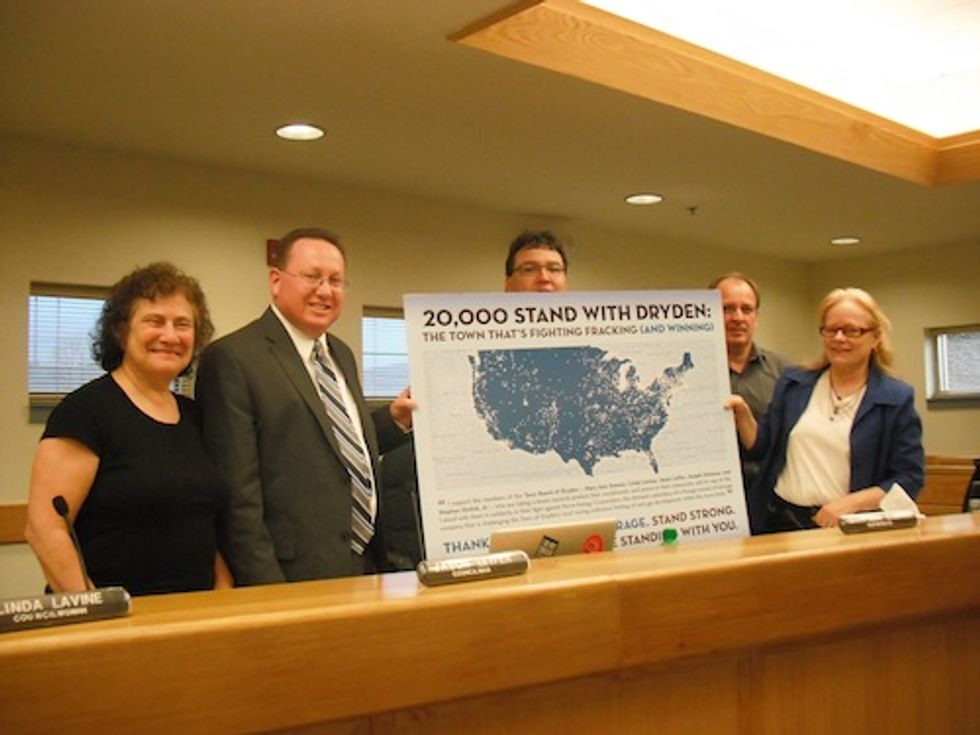 Local residents and elected leaders in Dryden, N.Y. are celebrating victory in a closely watched case over local fracking bans. A state appeals court ruled in favor of the towns of Dryden and Middlefield, affirming lower court decisions upholding the towns’ right to ban oil and gas development activities—including the controversial technique of fracking—within town limits. The legal battle first began in 2011 and industry is widely expected to seek review of the ruling by New York’s high court (the Court of Appeals).

Town board members hold up a poster demonstrating support from more than 20,000 people around the country. Photo credit: Dryden Resource Awareness Coalition

“I’m proud to represent the Town of Dryden and I’m especially proud today,” said Town Supervisor Mary Ann Sumner. “We stood up for what we knew was right. And we won. The people who live here and know the town best should be the ones deciding how our land is used, not some executive in a corporate office park thousands of miles away.”

The case in Dryden has taken on special significance. More than 20,000 people from across the country and globe sent messages to Sumner and her colleagues on the Town Board, expressing support for the town in its legal fight.

Dryden’s story began in 2009, after residents pressured by oil and gas company representatives to lease their land for gas development learned more about fracking, the technique companies planned to use to extract the gas. During fracking, companies inject millions of gallons of chemically treated water into the ground to break up rock deposits and force out the gas. Residents organized and educated for more than two years under the banner of the Dryden Resource Awareness Coalition (DRAC), ultimately convincing the town board to amend its zoning ordinance in August 2011 to clarify that oil and gas development activities, including fracking, were prohibited.

“We love our town. We’re proud to be from a place that doesn’t back down from a tough fight. And we’re inspired by the outpouring of support we’ve received,” said DRAC member Deborah Cipolla-Dennis. “Now it’s our turn to support communities across New York and in Pennsylvania, Ohio, Colorado and elsewhere that are standing up to the oil and gas industry.”

More than 159 municipalities in New York have passed bans or moratoriums on fracking, prompting a nationwide groundswell: some 350 communities across the country have voted to take official action—from non-binding resolutions to improved protections to outright bans.

Deborah Goldberg, an attorney with the public interest law organization, Earthjustice, represented the Town of Dryden in the appeal.

“Today’s victory stands as an inspiration for communities seeking to protect themselves from the consequences of the fracking-enabled oil and gas drilling rush,” Goldberg said. “The oil and gas industry largely has been deregulated at the federal level. While state officials struggle with the decision whether to permit fracking, local officials have stepped in to fill the gap. Today’s ruling signals to local officials that they are indeed on solid legal ground.”

Just six weeks after Dryden prohibited fracking in 2011, Anschutz Exploration Corporation (a privately held company owned by a Forbes-ranked billionaire) sued Dryden over the zoning provision, claiming that localities did not have the right to ban industrial activity. Dryden successfully argued that their right to make local land use decisions, enshrined in the home rule provision of the New York State Constitution, applies to oil and gas development. In February 2012, a state trial court judge agreed.

Following that ruling, Norse Energy Company, a U.S. subsidiary of a foreign-owned oil and gas company, filed an appeal, with yesterday’s decision being the result. Shortly after filing its appeal, the company declared bankruptcy.

“The first oil and gas company to sue us backed down. The second went bankrupt. They both lost against us in court,” Sumner said. “When will the oil and gas industry get the message: bullying communities isn’t good for business?”