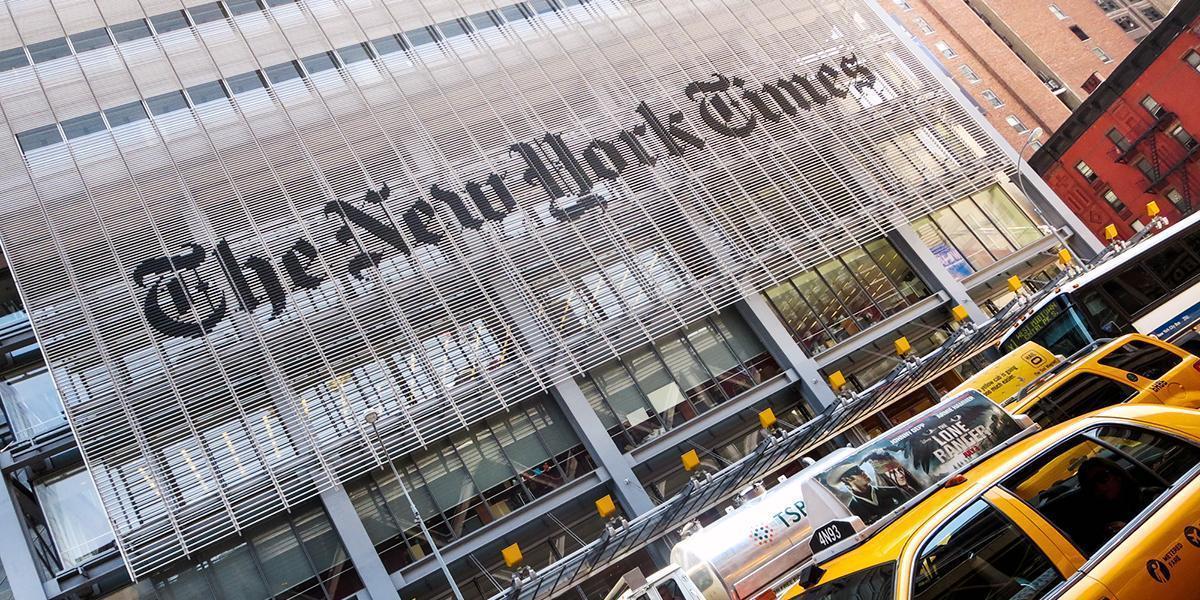 The New York Times has been defending the paper’s hiring of a climate science denier, fighting off its critics with what it claims is a standard fashioned from hardened “intellectual honesty.”

The controversial hire in question is that of Bret Stephens, formerly of the Wall Street Journal, who has joined the New York Times as a columnist and deputy editorial page editor.

While at the Wall Street Journal, Stephens consistently undermined and disparaged climate change, one time describing it as an “imaginary enemy” and another comparing it to religion with a “doomsaying prophecy and faith in things unseen.”

Stephens’ new boss, editorial page editor James Bennett, told the paper’s public editor Liz Spayd: “The crux of the question is whether his work belongs inside our boundaries for intelligent debate and I have no doubt that it does. I have no doubt he crosses our bar for intellectual honesty and fairness.”

Suffice to say, there are plenty who disagree. One climate scientist has already canceled his subscription in protest, with others watching closely.

No doubt that Stephens can write—he won a Pulitzer in 2012 for lots of opinions on stuff other than climate.

But like other conservative columnists admired for their poetic prose and strident opinions while attacking climate change, the methods used by Stephens might be compared to those of a fake chef producing a lumpy and unsatisfying word soup.

There’s no real care with the preparation and no quality control over the freshness or blending of the ingredients, but these indiscretions are suitably masked with enough flavor-enhancers to give some short-term satisfaction to unsuspecting diners/readers.

But the New York Times should probably be serving up something far more substantial than crap soup and three-day-old bread to its massive audience.

Let’s take, for example, a November 2015 column which Stephens wrote in the build up to the United Nations climate negotiations in Paris.

Stephens wrote that a trend in rising global temperatures was “imperceptible” and that the “hysteria” around climate change ignored how this trend could be “a product of natural variation.”

There is a mountain of evidence that global warming is not caused by “natural fluctuations” and this evidence has been in existence for decades. To suggest that it isn’t, would be to fall below any bar of intellectual honesty erected in the newsroom of the New York Times or in any science academy around the globe.

In the same column, Stephens chose to highlight “the hyping of flimsy studies—melting Himalayan glaciers; vanishing polar ice” that he said were being used to push a political viewpoint.

Stephens was referring to an error on Himalayan glaciers buried away in a UN report, while choosing to ignore the decades-long trend of melting that has been recorded at glaciers all over the planet.

Stephens himself has told Huffington Post that he’s an “agnostic” on climate change and said while it “seems” the weight of scientific evidence points to human causes for global warming, that evidence might be wrong because “the history of science is replete with consensus positions that have evolved.”

Now, the New York Times’ own defense of its hiring of Stephens is almost as redundant as the arguments that Stephens borrows from climate science deniers.

In an interview with the Huffington Post, the New York Time’s Bennett said there was “more than one kind of denial.”

“And to pretend like the views of a thinker like Bret and the millions of people who agree with him on a range of issues, should simply be ignored, that they’re outside the bounds of reasonable debate, is a really dangerous form of delusion,” he said.

Let’s think about what the New York Times opinion page might look like if we based it on the beliefs of millions of Americans.

According to Gallup polling data, some 20 percent of Americans believe in witches, which is roughly half the number of people who think extrasensory perception is actually a thing.

A poll conducted by Harris in 2016 found that two out of five Americans think ghosts are real. Belief in evolution? That’s at 49 percent. Creationism? Some 37 percent are down with that.

Lizard people controlling societies? One in 25 Americans fear their presence, but where’s their representation in the New York Times editorials?

Arguing that someone should be hired to the editorial desk of one of the world’s most influential newspapers because “millions of people” hold a particular belief is a clear path to supporting the sort of delusional thinking that has more Americans believing in the paranormal than accepting that climate change is mostly human-caused.

Opinions are worth printing when they’re based on the preponderance of credible evidence, not the self-interests of fossil fuel–funded “fellows” at so-called think tanks or the whimsy of attention-seeking contrarians.

In an August 2011 interview on Fox News Business, Stephens told viewers “in the 1970s we were supposed to believe in global cooling.”

Were we? Well, if you want to base your intellectually robust opinion on a moldy-old myth based on a couple of 1970s news items, then fine.

Alternatively, read a 2008 review of science papers published between 1965 and 1979 finding that only seven papers were predicting cooling against 44 saying temperatures would rise.

Here's the newest op-ed columnist for the @nytimes citing the author of Jurassic Park as a reason for his climate denial pic.twitter.com/rBUZzcwUI4

Also in that interview, Stephens lauded an essay by the late author Michael Crichton that attacked the consensus on global warming.

In that essay, based on a lecture, Crichton said: “Whenever you hear the consensus of scientists agrees on something or other, reach for your wallet, because you’re being had.”

So let’s just stop a second and think about what Crichton was advocating here.

The consensus of medical science says smoking will massively increase your risk of getting cancer and heart disease, even if you can’t say exactly which cigarette killed your wheezy relative. You’re being had, folks.

Crichton was putting up a straw man argument—that science is done by consensus—in order to then attack it.

When people talk about a consensus on the causes of climate change, they’re describing the collective findings of thousands of peer-reviewed articles published in leading scientific journals over decades using multiple methods from a diverse set of observations.

The consensus that climate change is caused by humans comes from the long-studied physical properties of greenhouse gases to the measurements of warming oceans, the atmosphere and the places on the planet where there is or was, ice.

Don’t get me wrong here, folks. You’re free to choose a glib sound bite from a science fiction writer based on a misrepresentation of the concept of scientific consensus.

But take care not to be had by charlatans promising to chat to your very dead Aunty Betty or save your soul from the claws of the lizard people.

I think it might be time someone broke into the editorial office of the New York Times and raised that bar of intellectual honesty.