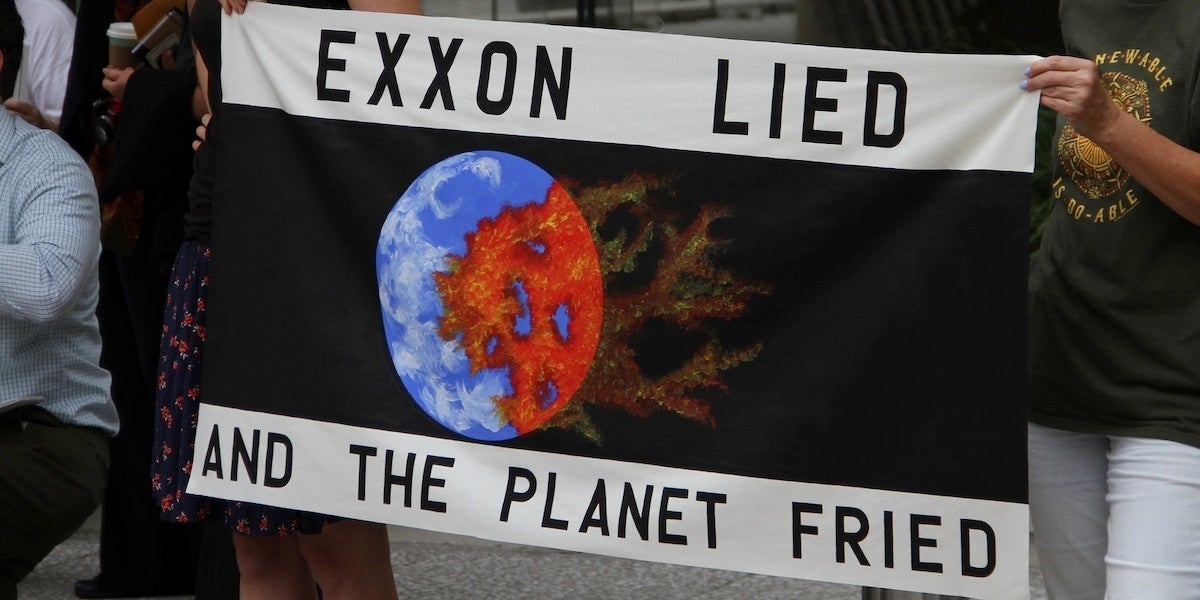 New York Attorney General Barbara Underwood filed a
lawsuit against Exxon Mobil on Wednesday alleging the company defrauded shareholders and downplayed the risk of climate change to its business.

The suit, first reported by the
New York Times, is the culmination of a years-long investigation—colloquially known as the #ExxonKnew probe—into the energy giant’s business practices and whether it lied to investors and the public about the risks of climate change.

In a
press release, Underwood’s office said the investigation uncovered an alleged fraudulent scheme to systematically and repeatedly deceive investors about the significant impact that future climate change regulations could have on the company’s assets and value. The alleged fraud reached the highest levels of the company, including former chairman and CEO Rex Tillerson.

“Investors put their money and their trust in Exxon—which assured them of the long-term value of their shares, as the company claimed to be factoring the risk of increasing climate change regulation into its business decisions. Yet as our investigation found, Exxon often did no such thing,” Attorney General Underwood said in the press release. “Instead, Exxon built a facade to deceive investors into believing that the company was managing the risks of climate change regulation to its business when, in fact, it was intentionally and systematically underestimating or ignoring them, contrary to its public representations.”

The suit, filed in New York Supreme Court, New York County, seeks an order prohibiting Exxon from continuing to misrepresent its practices in this area and requires it to tell investors the truth. It also asks the court to award damages, although no dollar amount was specified.

The impact of the alleged fraud on the company’s value could be massive. Underwood’s office listed the following:

The fossil fuel corporation
has tried to block the climate probe in courts in three states, the Times noted.

A company spokesman told
The Hill that there “is no evidence to support these allegations.”

“These baseless allegations are a product of closed-door lobbying by special interests, political opportunism and the attorney general’s inability to admit that a three-year investigation has uncovered no wrongdoing,” the spokesman said. “The company looks forward to refuting these claims as soon as possible and getting this meritless civil lawsuit dismissed.”

In 2016,
DeSmog uncovered Exxon corporate documents from the late 1970s stating unequivocally “there is no doubt” that carbon dioxide from the burning of fossil fuels was a growing “problem” well understood within the company. Despite this knowledge and warnings from its own scientists, Exxon shelved these concerns and “launched a sophisticated, global campaign to sow doubt and create public distrust of climate science,” DeSmog reported.

“Climate change deception is central to Exxon’s business model,” Richard Wiles, the executive director of the
Center for Climate Integrity, said in an emailed statement. “This is the same company that bankrolled a 30-year, multimillion denial campaign, manufacturing doubt about climate science when it knew there was none.”

“Big oil may finally face some consequences for its role in wrecking the climate,” McKibben said in an emailed statement. “The New York Attorney General is standing up for investors who may have been swindled, and indirectly for the 7 billion of us who will suffer from Exxon’s lies.”

Judge to Exxon: Explain Where Those Wayne Tracker Emails Went https://t.co/z9hKeJspaa (via @Ecowatch)