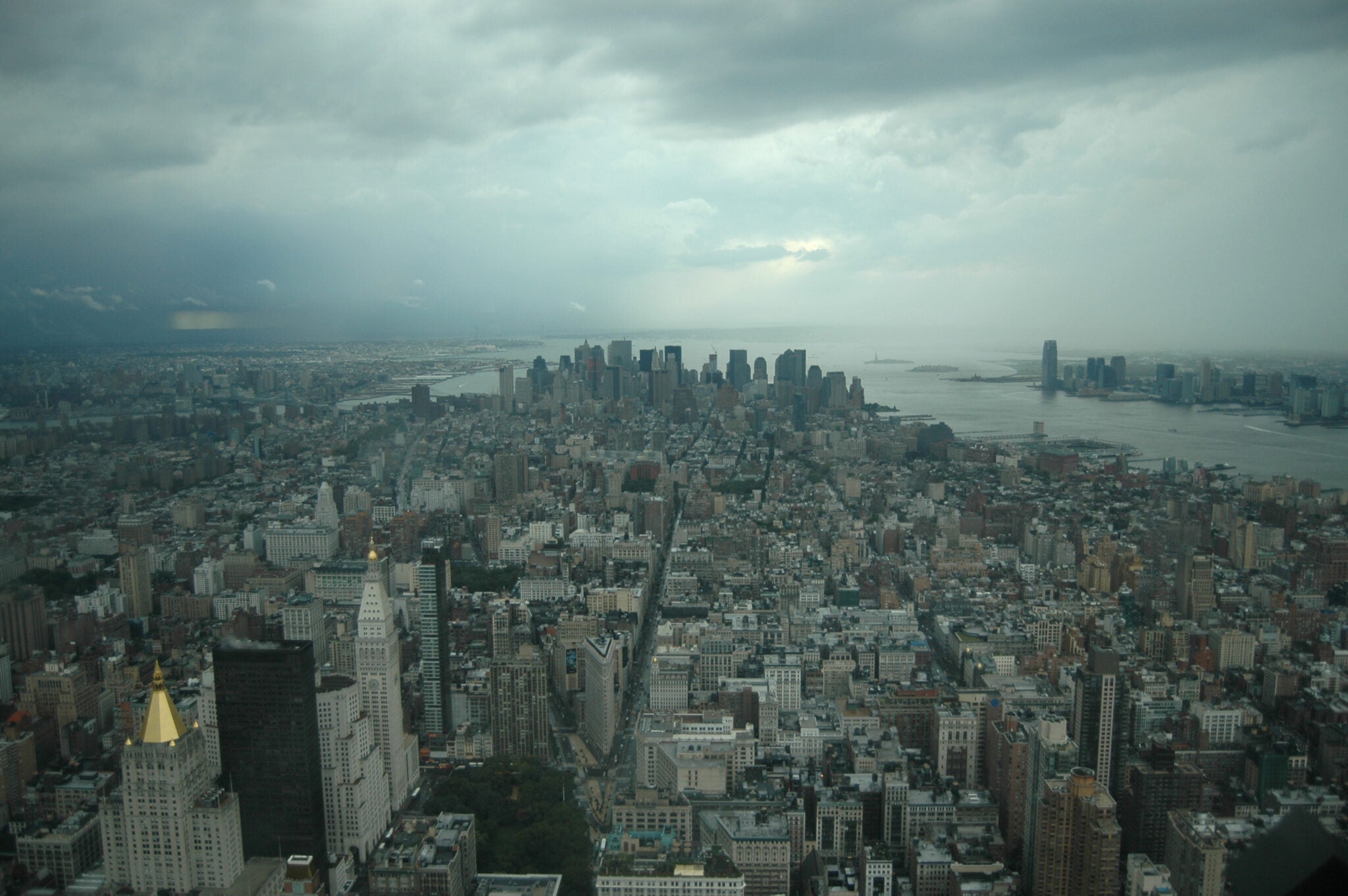 New York City could be struck by severe flooding up to every five years by 2030 to 2045 if no efforts are made to curb human-driven climate change, new research finds.

Floods that reach more than 2.25 meters (approximately 7.4 feet) in height—enough to inundate the first story of a building—could dramatically increase in frequency as a result of future sea level rise and bigger storm surges, the study suggests. Such severe floods would be expected only around once in every 25 years from 1970 to 2005.

The findings make it clear that “[flood] adaptation measures are critical to protect lives and infrastructure in a changing climate,” the lead author told Carbon Brief.

Like many coastal cities in the U.S., New York is vulnerable to flooding driven by storm surges from tropical cyclones, as well as sea level rise. In 2012, Hurricane Sandy overwhelmed the city with floodwater, killing 43 people and causing close to $50 billion in damages.

The height of these waves is dependent on the underlying sea level, the tide, and the size of the tropical cyclone. As sea levels rise, a storm surge has more chance of breaching coastal flood defenses.

During Hurricane Sandy, the combined impact of the storm surge and a high tide saw sea levels reach a record height of 3.44 meters (approximately 11.3 feet). 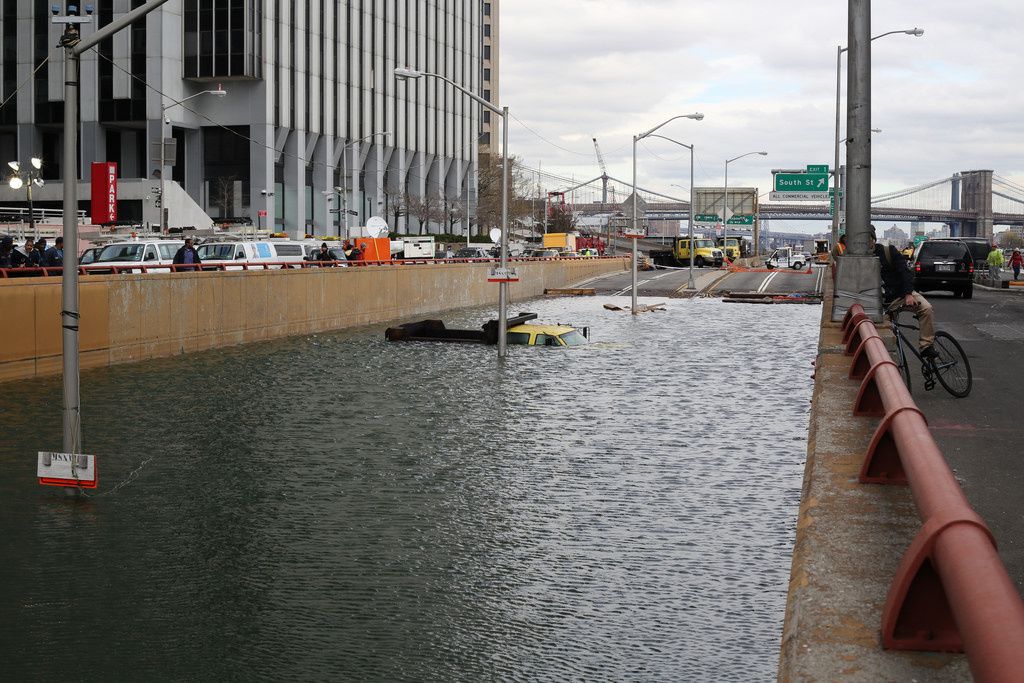 To understand how climate change could affect the future risk of coastal flooding in New York, researchers used models to simulate the behavior of future tropical storms, as well as sea level rise in its surrounding waters.

Using a collection of global climate models,, the researchers gathered information about factors that impact the behavior of tropical storms. These factors include air temperature, humidity, sea surface temperature and wind speed.

The researchers used this information to create “synthetic storms,” or the storms that are likely to exist in a warmer climate, explained Dr. Andra Garner, a scientist from Rutgers University in New Jersey and lead author of the new study published in the Proceedings of the National Academy of Sciences. She told Carbon Brief:

“Using this information, we can generate a set of storms whose behavior is consistent with a range of different climates. Each of these storms has their own unique set of characteristics, such as wind speed and pressure field.”

The researchers then used a storm surge model (known as ADCIRC) to generate the expected surge that each synthetic storm could create at The Battery, a public park located at the southern tip of Manhattan Island.

The results suggest that storms are likely to become larger and more powerful in the coming decades. (Carbon Brief has previously explored the link between climate change and tropical storms.)

However, a rise in storm intensity may not necessarily affect the size of storm surges, said Garner. This is because changes in ocean conditions in a warmer climate could cause tropical storms to shift eastwards, away from New York City. She said:

“As we move from the modern time period into the future, we find that storms tend to become more intense, while simultaneously shifting somewhat eastward, away from New York City. The increase in storm intensity is compensated by the shift in storm tracks. That is, changing storm surge heights alone do not have a great impact on increasing the future flood risk for the city.”

However, sea level rise is likely to affect the size of future storm surges, the results suggest. Gardner said:

“The bad news is that when sea level rise is added into the picture, it becomes clear that overall flood heights will become drastically worse in New York City in coming years.”

In addition, the researchers used existing scenarios that considered the potential impact of changes to the Antarctic ice sheet (AIS) (red, maroon).

The latest assessment report from the Intergovernmental Panel on Climate Change (IPCC) estimated the contribution of the AIS to sea level rise could be -8 to 15cm under RCP8.5 by 2100 (pdf).

However, the authors of the new study noted that recent research using “a coupled ice sheet and climate dynamics model that includes marine ice sheet instability, ice shelf hydrofracturing, and marine ice-cliff collapse mechanisms suggests that the AIS could contribute more than 1m by 2100, and more than 10m by 2300, under RCP8.5.”

Although there is “deep uncertainty” around the contributions of the Antarctic ice sheet to sea level rise, the authors wrote, “the potential for large contributions should not be neglected in risk assessments.” 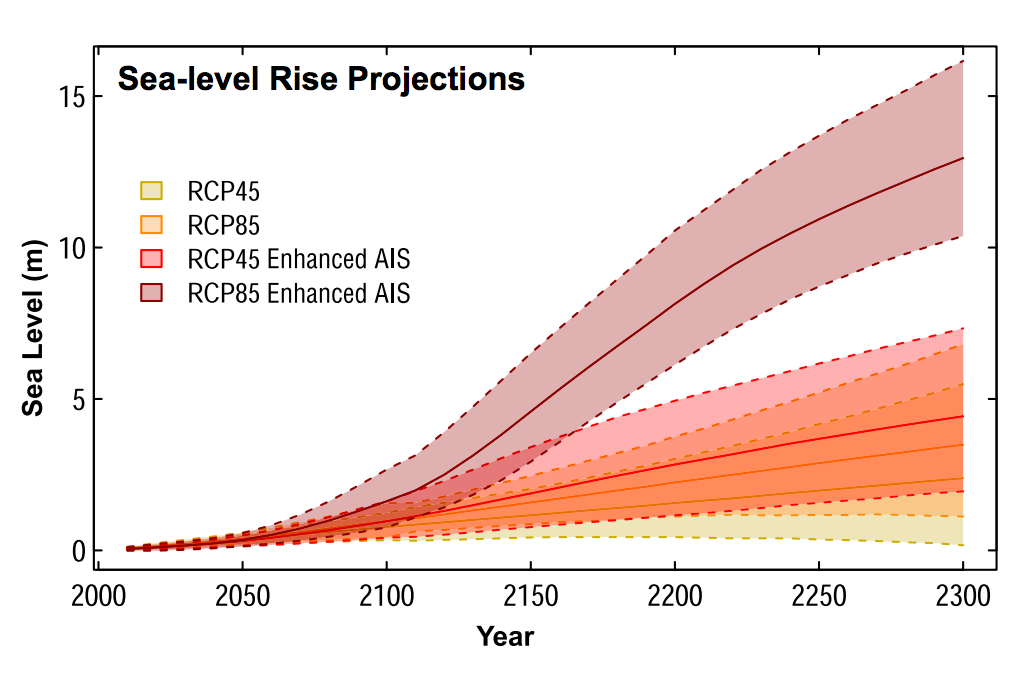 The researchers combined their measurements of projected sea level rise and projected storm surge heights in order to estimate the total height of floods in New York in the coming decades.

The results showed that flood heights in New York from 2080 to 2100 could be 1.4 meters (approximately 4.6 feet) above the average flood heights witnessed from 1970 to 2005, when an average is taken from all the scenarios of future sea level rise.

And serious floods, which exceed more than 2.25 meters (approximately 7.4 feet) in height, could dramatically increase in frequency over the coming decades, Garner explained:

“When rising sea-levels combine with storm surge heights, flooding becomes much worse over time. For example, a 2.25 meter flood height, which occurred on average once every 500 years before 1800 in our work, and occurred once every 25 years on average from 1970 to 2005 in our study, could occur once every five years by 2030 to 2045 according to our results.”

Such floods could pose a significant risk to human safety, she added.

“A flood height of 2.25 meters is a significant enough flood to potentially inundate the first story of many buildings. Post-Sandy, some infrastructure and planning is almost certainly trying to account for future flooding situations, but a flood of this magnitude in New York would certainly still have significant impacts for many aspects of the city.”

The findings should prompt city planners to face up to the challenges posed by climate change, said Garner:

The study is “very useful” said professor Kevin Trenberth, distinguished senior scientist at the National Center for Atmospheric Research, who was not involved in the study, but it doesn’t include “some things of importance” such as the added impact of high tides and the risk of mid-latitude storms.

Also, looking as far out into the future as 2300 means the study relies on uncertain assumptions about factors such as future greenhouse gas emissions, he told Carbon Brief:

“The paper assesses coastal flood risk over the next three centuries, but these risks depend hugely on scenarios as to how factors such as emissions and population size change. This makes me quite uncomfortable: the assumptions are huge and understated.”

It’s also worth noting that other nearby cities, such as Hoboken in New Jersey, are “every bit or more vulnerable” than New York City, Trenberth added.