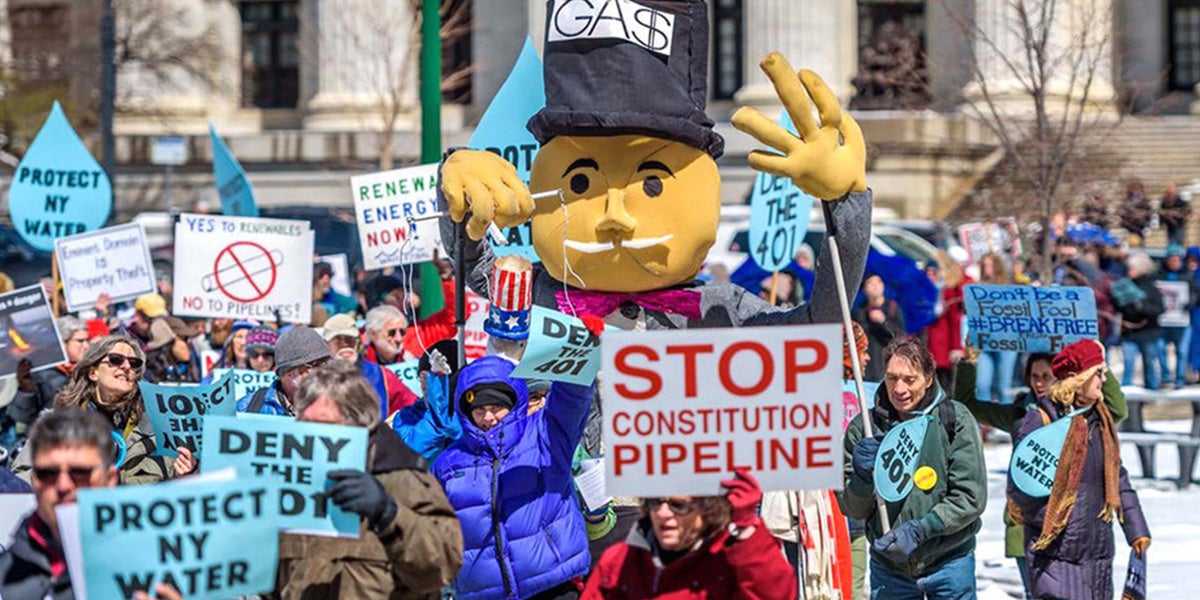 The U.S. Supreme Court on Monday rejected a petition filed by
Constitution Pipeline to challenge New York state’s denial of a water quality certification for the natural gas project.

Natural Gas Intelligence reported: “The petition was distributed for conference, or discussion, on Friday, but the justices simply denied it.”

The ruling leaves in place the
August 2017 judgment of the New York-based 2nd U.S. Circuit Court of Appeals, which sided with the state. This is a big win for the attorney general’s office and the state’s authority to protect its waters and natural resources.

“Great news for New Yorkers today as SCOTUS declines to hear challenges to New York’s denial of a key certification for the Constitution Pipeline,” Attorney General Eric Schneiderman tweeted Monday. “Clean water is a basic right. We won’t allow a pipeline to put that at risk.”

The proposed project—which environmentalists have dubbed “the Keystone of natural gas“—is an interstate pipeline running from Pennsylvania (ground zero for fracking in the Northeast) to New York that would transport 0.65 billion cubic feet per day of shale gas.

Schneiderman
warned that the project would include construction of 100 miles of new natural gas pipeline across undeveloped lands in central New York, impacting and crossing more than 250 streams and more than 80 acres of wetlands.

The U.S. Federal Energy Regulatory Commission (FERC) approved construction of the pipeline in 2014 and again in 2016, but conditioned that approval on certification from New York state.

New York’s Department of Environmental Conservation denied the certification in April 2016 on the grounds that Constitution failed to provide sufficient information to demonstrate that the project would comply with the Clean Water Act and meet New York’s water quality standards.

Constitution challenged the Department of Environmental Conservation’s denial to the 2nd Circuit last year, but lost. And
earlier this year, FERC maintained the state’s decision and rejected Constitution’s attempts to shorten the time states have to consider natural gas pipeline applications for Clean Water Act permits.

Although Constitution may soon run out of legal options, the project is still not dead. According to
Reuters, “the Supreme Court’s refusal to hear the company’s appeal of the 2nd Circuit’s ruling does not necessarily kill the project. The company has separately petitioned FERC to overturn the state agency’s decision. In March, the federal regulator gave itself more time to consider the issue.”

“Without a ruling from the U.S. Supreme Court, there is a serious risk that states will use the Second Circuit’s ruling to abuse their narrowly circumscribed [Clean Water Act] authority in their efforts to frustrate interstate natural gas pipeline development at the expense of vital national interests,” the project sponsors have
said.

We continue to believe that this federally-approved project has been unjustly prohibited from construction. pic.twitter.com/NWcMvUW04O

The industry has increasingly raised alarms that New York has been acting as a veto on federal pipeline permitting decisions. They argued that if left un-reviewed, the 2nd Circuit decision would give states a roadmap for blocking construction of FERC-approved pipelines and deprive states and the nation of the benefits of the centralized process set out in the Natural Gas Act.

Moneen Nasmith, staff attorney with
Earthjustice, who represented intervenors helping to defend New York’s decision, said her group was happy but not surprised “by the recognition by the court that the petition had no merits.”

“We’re definitely elated that the court agreed to allow the 2nd Circuit’s decision to stand and that the state’s authority to say no to a thoroughly deficient application will remain in place.”

She added that the industry’s worries about the 2nd Circuit’s decision blocking natural gas development are “wildly exaggerated.”

According to Natural Gas Intelligence, the developers said Monday that they “continue to believe that this FERC-approved project should be allowed to proceed with construction.”