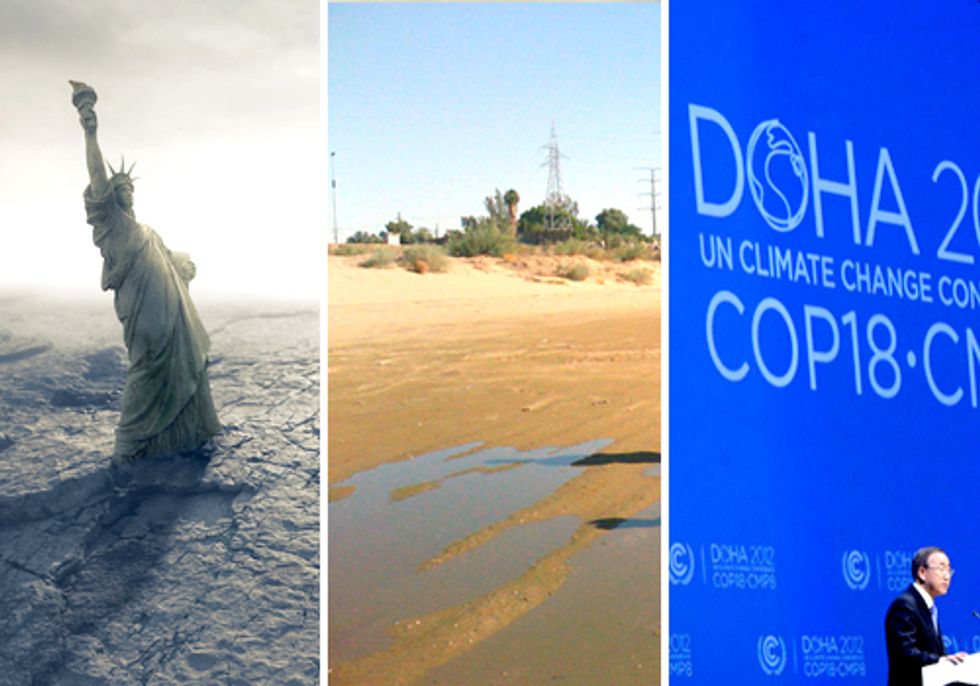 Perhaps two of the most provocative photos from the 2012 election in the New York Times showed President Obama dealing with climate change.

The first was the photo of Obama in New Jersey with Governor Christie, hugging a hurricane victim. By many scientific accounts, Hurricane Sandy may have been part and parcel of the extreme and erratic weather that climate change now brings us.

The second was a photo where Obama stood in front of one of the most serious examples of climate change impacting an equally large segment of America's population, but not a word was mentioned about climate change in this story. What was that photo? It was of Obama at Hoover Dam the day of the first presidential debate.

Remarkably, although Obama stood alongside the Colorado River in front of Hoover Dam, no news reports discussed the dribble of water comprising what's left of the Colorado River coming out of that dam. And remarkably, no news reports (or Obama) peered over dam at the ever-shrinking Lake Mead, which sits just above half full, along with the now 100-foot tall bathtub ring around the lake signaling how much the lake has shrunk over the past decade due to extreme drought and climate change.

At the very same moment in history when the largest recorded hurricane battered New York City and the East Coast's largest population centers, one of the biggest droughts in history is damaging the Southwest U.S. and the Colorado River system which provides water to 30 million people including the largest population centers on the West Coast—Los Angeles and San Diego—as well as Phoenix, Tucson, Las Vegas, Salt Lake City and Denver.

Those of us working hard to address the water supply and river protection challenges in the Southwest U.S. watched nearly dumbfounded as President Obama stood at Hoover Dam beside the dwindling Colorado River and shrinking Lake Mead, yet not a word was uttered about drought and climate change. Likewise, environmentalists, scientists and progressives across the country cringed during every presidential debate at the dramatic omission of one of the biggest issues facing this country—and indeed the planet—climate change, continued unabated. It wasn't until the massive destructive hurricane hit that the topic even rose on the mainstream media's radar screen causing the president to finally address it.

Over the last few weeks, the Obama administration led by Secretary of the Interior Ken Salazar, has made some great steps forward to improve long-standing problems associated with the Colorado River by increasing flood flows in the Grand Canyon and by a history-making treaty with Mexico to once again let the Colorado River flow all the way to the Gulf of California. In the next few months, Secretary Salazar is faced with an even bigger challenge, that of recommending a path forward based on a scientific study—called the "Basin Study"—for how to address the Southwest's water supply challenges for the next few decades, and climate change is a central player in the Secretary's challenge.

As the U.N. climate talks in Qatar moved forward the last two weeks, it was time for America to be at the table. No longer can we pretend that climate change is not impacting us. The extreme weather events—scorching heat waves, extreme drought, massive hurricanes—are real, are happening right now and are financially disastrous from New York City to the Colorado River.

It has been said that America only responds to crises, that it takes a natural disaster for us to deal with our social disasters. But do we really need even more provocative photos to more "Forward?"