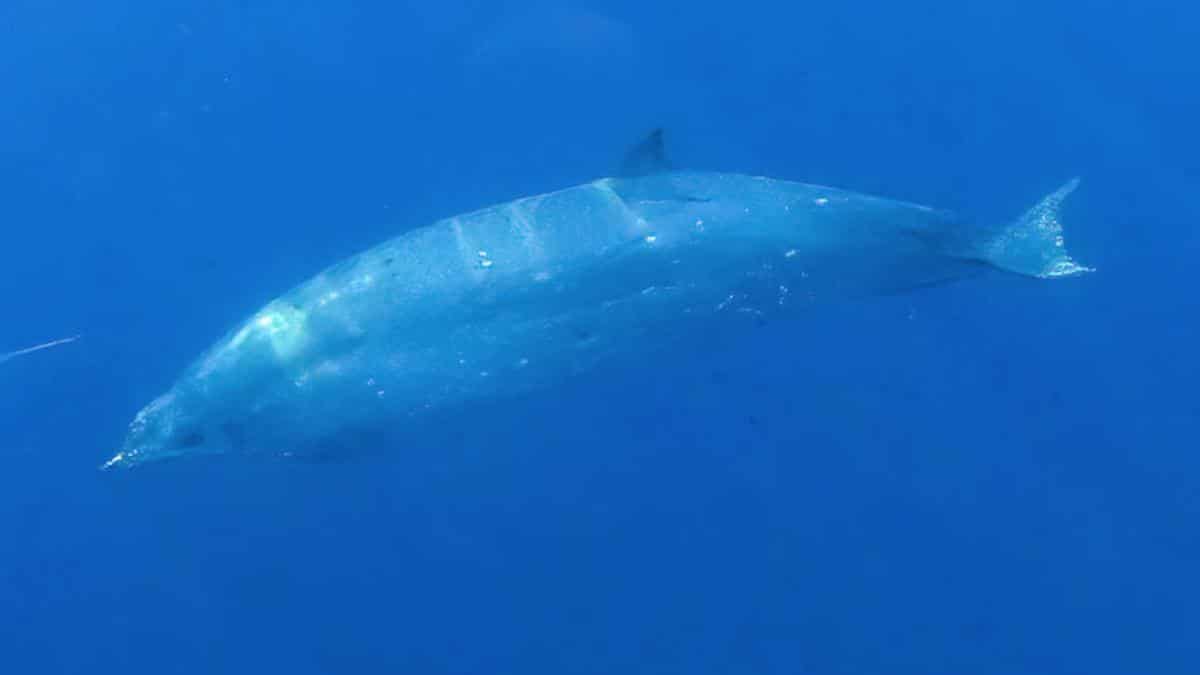 A beaked whale believed to be a new species. Sea Shepherd / CONANP

When a trio of beaked whales surfaced off Mexico’s Pacific coast, researchers thought they’d found the elusive Perrin’s beaked whale (Mesoplodon perrini), an endangered species that’s never been officially sighted alive. But upon closer inspection, the researchers realized they may have stumbled upon something even rarer — a new species of beaked whale altogether.

On Nov. 17, the research team was sailing aboard the Martin Sheen, a vessel operated by conservation group Sea Shepherd, when they spotted the three beaked whales about 160 kilometers (100 miles) north of Mexico’s San Benito Islands. They managed to capture photos and video recordings of the animals, and also dropped a specialized microphone underwater to record the animals’ acoustic signals.

“The whales, amazingly, surfaced four or five times really close to the ship,” Elizabeth Henderson, a bioacoustics scientist at the Naval Information Warfare Center Pacific’s (NIWC PAC) whale acoustics reconnaissance program and one of the researchers on the expedition, told Mongabay in an interview. “They actually seemed to be circling us. We put in one of our acoustic recorders, and they kind of checked that out. For beaked whales, it was incredible, because beaked whales are typically so elusive when it comes to ships.”

Beaked whales communicate via echolocation clicks above the frequency of human hearing. But when Henderson and her colleagues analyzed the acoustical data, they found that these whales’ clicks were slightly different from those produced by Perrin’s beaked whales. The whales also appeared to have distinct physical characteristics.

“The Perrin’s beaked whale [has] teeth … right at the end of the rostrum, they’re right at the end of the jaw,” Henderson said. “And so when we started looking at the photos, we realized that the teeth are further back, so they couldn’t be Perrin’s. And then when we started to look at other characteristics, including different color patterns and its size …. it’s like a jigsaw puzzle. Once we started putting all the pieces together, we realized that not only was it not Perrin’s, but it really didn’t seem to match any of the other characteristics of described beaked whales.”

The trio of beaked whales encountered by the research team in November. Sea Shepherd / CONANP

While the scientists say they are “highly confident” they found a new species, they took water samples near the whales in order to analyze the environmental DNA, or eDNA, which Henderson says will help assess whether the beaked whales were definitely a new species.

“We’re literally taking water samples from where the whales dove, so right where they were,” Henderson said. “The hope is that there’s some genetic material left in the water, whether that’s sloughed skin, whether it’s some remnants of fecal matter.”

“We saw something new,” Jay Barlow, a senior scientist at National Oceanic and Atmospheric Administration (NOAA) and another one of the researchers on the expedition, said in a statement. “Something that was not expected in this area, something that doesn’t match, either visually or acoustically, anything that is known to exist. It just sends chills up and down my spine when I think that we might have accomplished what most people would say was truly impossible — finding a large mammal that exists on this earth that is totally unknown to science.”

One of the three beaked whales believed to be a new species. Sea Shepherd / CONANP

Takashi Fritz Matsuishi, a professor at Hokkaido University’s School of Fisheries Sciences and co-author of a 2019 paper identifying another new species of beaked whale — the Sato’s beaked whale (Berardius minimus) — said it’s very possible that the researchers found a new species near the San Benito Islands. However, he said that a new species could not be accurately identified using only eDNA analysis, acoustics or visual observations.

“The external morphology and osteological descriptions are strictly required,” Matsuishi told Mongabay in an email, referring to the animal’s physical features and skeletal structure. “That is the reason that our Sato’s beaked whale [took] 6 years to be described as a new species since the publication of the paper showing the genetical difference in 2013.”

Matsuishi also said the “new” species might simply be a species already known to science, such as the pygmy beaked whale (Mesoplodon peruvianus) or even the Perrin’s beaked whale, which was the researchers’ initial assumption.

While Henderson and her colleagues are waiting on the results of their eDNA analysis, they are excited about their possible discovery. Henderson said the team is currently working on a paper to describe the species’ acoustics and the morphological characteristics, which they hope to release shortly.

“I just think it’s amazing that in this day and age, when we feel like we know everything, that something as large as a new species of beaked whale is potentially still out there,” she said. “I think that just goes to show that we don’t know as much as we think we do, and there is still so much more to be explored.”