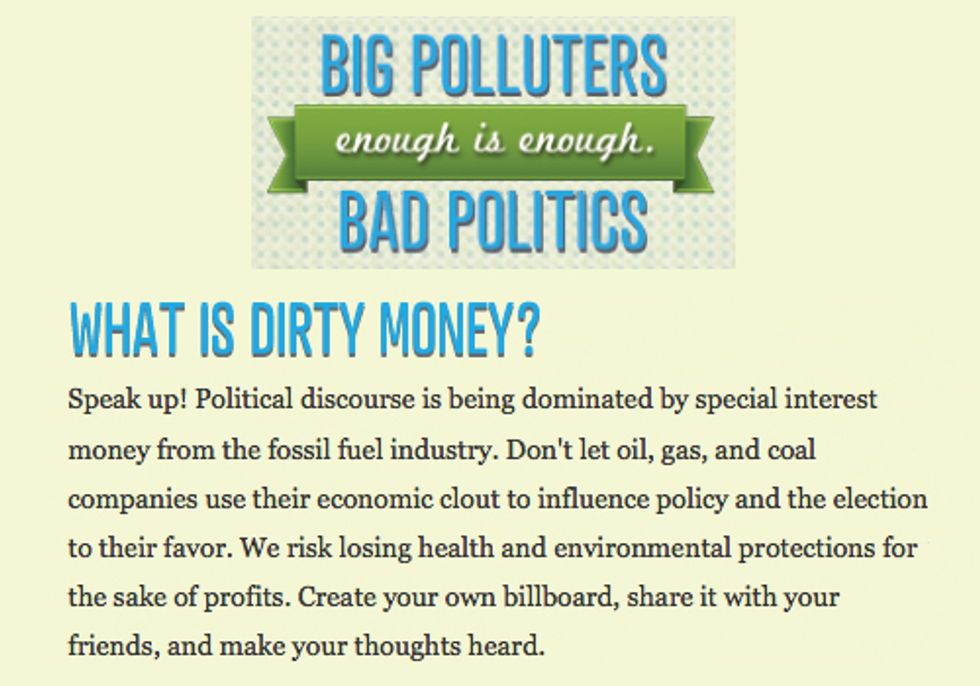 Today, the Sierra Club launched Big Polluters, Bad Politics, an interactive online platform that gives Americans the chance to fight back against the corrosive influence of the dirty energy industry this election cycle. The website allows voters to easily create their own humorous political ads and share them with their friends and social networks, giving them a voice despite the deluge of ads paid for by Big Oil and Big Coal companies.

“By spending hundreds of millions of dollars, big oil, gas and coal companies are trying to drown out the voices of millions of Americans who support clean energy innovation,” said Cathy Duvall, Sierra Club director of public advocacy and partnerships. “This project will give Americans a chance to cut through the polluted airwaves and push back against big polluters and their dirty politics.”

According to a mid-September analysis by the New York Times, the fossil fuel industry has already spent more then $150 million this election cycle on television ads smearing clean energy, pushing dirty energy and attacking President Obama. Meanwhile, oil billionaires David and Charles Koch have announced plans to spend upwards of $400 million to defeat the President. Republican presidential candidate Mitt Romney has even gone as far as to name oil executive Harold Hamm and coal lobbyist Jim Talent as two of his top energy advisers.

The Big Polluters, Bad Politics website features a library of images based on the theme of fossil fuel industry political spending. Users can enter their own text to create an ad and enter to win a PUBLIC bicycle. Sierra Club will also feature the most popular ad on their Facebook page.