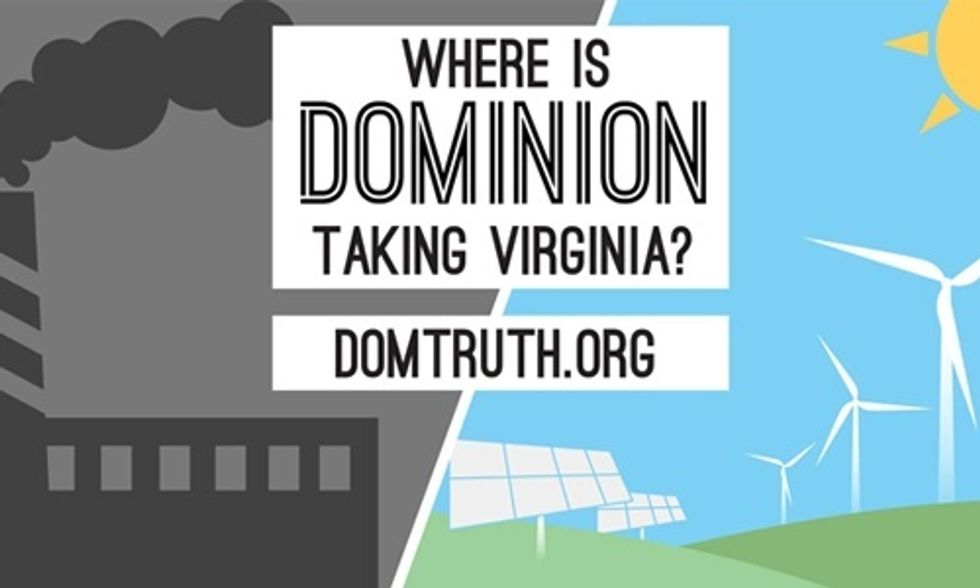 Every year around Earth Day, a new crop of corporate greenwashing tends to spring up with the flowers. In the Mid-Atlantic region, and Virginia in particular, one of the biggest culprits is Richmond-based Dominion Power.

Every year around Earth Day, Dominion funds slick ads, community projects like tree-plantings, outdoor festivals and more to paint itself as a “green” and “sustainable” company.

This year, the Chesapeake Climate Action Network has launched an interactive new website to set the record straight: domtruth.org.

You might know of Dominion Resources as the company pushing the massive liquefied natural gas export facility at Cove Point in southern Maryland, or the proposed 550-mile Atlantic Coast Pipeline to carry fracked gas from West Virginia to North Carolina.

But did you know that Dominion is also the largest electric utility in Virginia, the state’s number one emitter of the heat-trapping pollution wrecking our climate and the number one corporate donor to state politicians?

For far too long, Dominion has used its power to rig the system against local, clean energy solutions and for costly fossil fuel projects, and Virginians are paying a high price as a result. Instead of embracing the future of an electric grid powered by rooftop solar panels on customers’ homes and wind turbines spinning off Virginia’s coast, Dominion is currently investing in a massive build-out of pipelines and power plants to carry and burn fracked natural gas.

We call Dominion’s deliberate misleading of the public “greenwashing.” This year in particular, we expect Dominion to churn out more greenwashing than ever before—because the company is also facing more public scrutiny and protests over its dirty energy projects than we’ve seen before. That's the good news.

You know there’s a serious image problem when sixth graders and senior citizens alike are standing up at county meetings to decry Dominion’s 550-mile pipeline for fracked gas; when riverkeepers are joining with history buffs to challenge Dominion’s massive proposed transmission lines over Jamestown; and when editorial writers across the state are hammering the company’s anti-consumer “power politics.”

With so much opposition brewing, particularly in response to the Atlantic Coast Pipeline, we’re seeing cracks open up in Dominion’s tightly controlled corporate image. We’re also seeing Dominion’s tight grasp over our democracy get renewed exposure and criticism in the media.

When Dominion put forward legislation in the 2015 General Assembly to partially halt state oversight of its electric rates, news stories zeroed in on Dominion’s “unrivaled political power” over the General Assembly. Following fierce public backlash, legislators ended up amending the bill to lay the groundwork for 400 megawatts of new utility-scale solar in Virginia and to create new energy efficiency pilot programs.

We know by exposing the truth, we begin to take the power back from Dominion. And nothing worries Dominion more than losing its power—over our energy system and over our democracy.