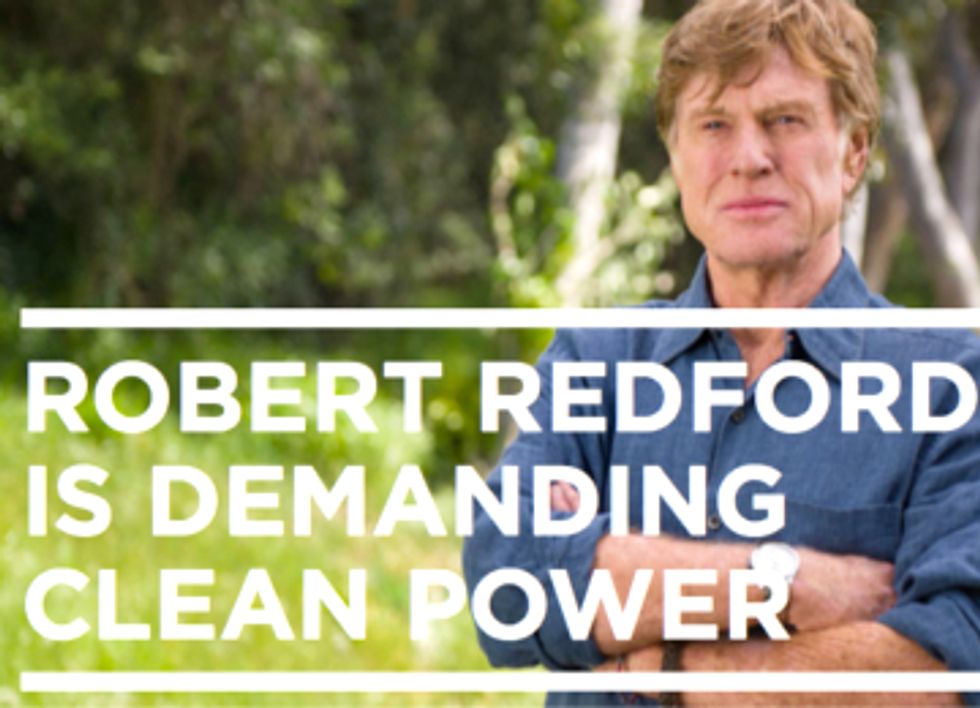 I have worked to curb climate change for more than a decade. I keep up the fight because I know we can tackle this crisis. I know clean energy solutions exist that can reduce dangerous carbon pollution and strengthen our economy at the same time. But even as we unite behind sustainable technologies, we have to mobilize and stop the dirtiest projects—projects like tar sands oil.

In a new video Natural Resources Defense Council (NRDC) Trustee Robert Redford outlines the hazards of this filthy fuel and explains that while strip mining for tar sands is great for oil companies, it’s terrible for the rest of us who want to preserve the northern forests, protect drinking water and leave our children with a stable climate.

“The saner choice is clean energy,” Redford says. “But we’re not going to get it unless millions of us demand it. So please join me in saying no to tar sands oil and yes to clean energy.”

You can add your voice to this call at NRDC’s new site DemandCleanPower.org—a gathering place for those who stand firmly against climate-destroying fuels and in favor of a clean energy future. Some of the nation’s leading cultural figures, including Redford, Van Jones, Julia Louis-Dreyfus, Carole King and Jack Kornfield are joining forces with us to help move America beyond fossil fuels and climate chaos.

We need this critical mass now more than ever. As Redford says in his video, America won’t realize our clean energy potential unless more people demand it.

Thousands of homegrown companies are tapping these sustainable resources, and many states have smart policies to spur wind and solar development and investment in energy efficiency. But fossil fuel companies and their allies in Congress try to rig the game in their favor. They lobby in state houses to roll back environmental safeguards and they work on Capitol Hill to try to block the Environmental Protection Agency from addressing climate change pollution.

And now they want to build a pipeline that will expand production of the dirtiest fuel on the planet. As NRDC Trustee Van Jones says in his video for DemandCleanPower.org, “developing the Canadian tar sands would be like lighting a fuse on a carbon bomb.”

We must raise our voices against these dirty fuels, because when we are loud enough, our leaders listen. In November 2011, tens of thousands of people gathered at the White House to protest the Keystone XL tar sands pipeline, and days later President Obama hit the pause button on a project that had seemed destined to proceed. In February 2013, Kansas residents worked with NRDC to beat back an attempt to repeal the state’s clean energy standard, which has helped generate 12,000 local jobs in the wind industry and brought in $3 billion in investment. And this spring, grassroots activists, environmental public health groups, business executives and Latino leaders kept the pressure on President Obama until he finally announced a robust plan to confront climate change in June.

I welcome this progress, but we aren’t stopping here—we are pushing forward on numerous fronts. On September 21, for instance, our partners at 350.org are leading the Draw the Line day. People will be taking action across the U.S. to tell President Obama that stopping the Keystone XL tar sands pipeline is the only way to keep his climate promises.

Reining in dirty fuels won’t be easy. These industries have deep pockets and powerful influence.

But we will fight back, because we know there is a better way. America can transition away from the dirtiest fuels and toward more renewable power and more efficient cars, homes and businesses.

American Buddhist teacher Jack Kornfield urges us not to give in to confusion or paralysis in his video. “When we hear about climate change it feels overwhelming,” he says. “What can we do?  Let’s stop encouraging the use of dirty fuels and make the transformation that is possible for us. As Pablo Neruda the great Chilean poet writes, ‘you can pick all the flowers but you can’t stop the spring.'"

Click here to join other Americans in demanding clean power.