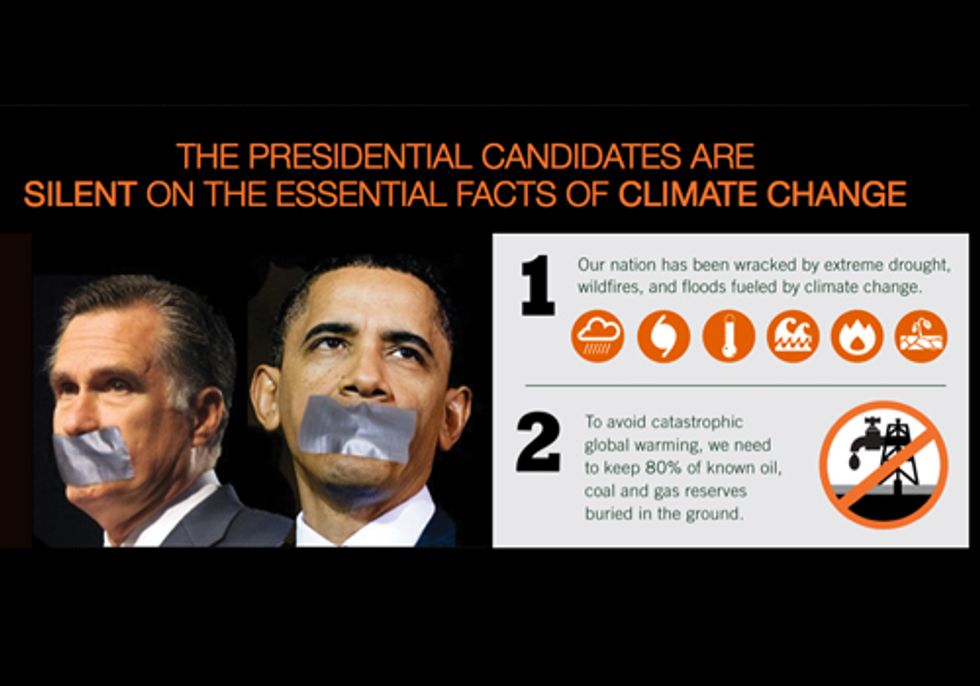 Friends of the Earth Action
Forecast the Facts

As the first debates approach, President Barack Obama and Gov. Mitt Romney have remained virtually silent on the most urgent global threat to the American dream: fossil-fueled climate change. Today, an aggressive social media campaign launches to mobilize Americans to demand that the candidates tell voters where they stand on climate change and how they would address it.

ClimateSilence.org, a project of Forecast the Facts and Friends of the Earth Action, urges voters to sign a petition to Obama and Romney “to explain how you will address the growing climate crisis if elected to the nation’s highest office.” The petition website is part an ambitious campaign to protest “climate silence” across Twitter, Facebook and other social media platforms, as well as at the debates and other events leading up to Election Day.

The website includes a dynamic chart that displays how both candidates have failed to connect the dots on extreme weather or do the math on carbon pollution, disregarding growing scientific alarm as the costs of climate change have increased. The chart is backed by a comprehensive database of the candidates’ public statements on climate change, recording President Obama’s decline from actions to avoidance and Governor Romney’s descent into denial.

“The next president will face a series of critical decisions about the energy future of a country already being ravaged by poisoned weather,” said Brad Johnson, campaign manager of Forecast the Facts, “The candidate who speaks out on the facts of climate change will reap the political rewards of brave and forthright leadership.”

“The silence of Gov. Romney and President Obama on climate change is deafening,” said Erich Pica, president of Friends of the Earth Action. “Voters deserve to know where they stand on the most serious threat to our nation. Anyone who is elected to lead the country—or aspires to do so—should realize that true leadership means a willingness to engage difficult issues, not sweep them under the rug.”

In the past, both Obama and Romney spoke forcefully about the need for action on global warming. But over the past four years, they have become increasingly mute on the scope of the problem and their plan to address it.

In that same period, Americans have been struck by a barrage of billion-dollar climate disasters, driven by increasing greenhouse pollution from fossil fuels. Scientists say we need to keep 80 percent of known global oil, coal, and gas reserves buried in the ground in order to have a reasonable chance of avoiding catastrophic climate impacts.

Elected officials, scientists and the press are increasingly critical about the candidates’ refusal to make global warming a top-tier issue. ClimateSilence.org builds on these criticisms by making clear exactly what the candidates are being silent on, and providing a mechanism for voters to demand that the silence end.