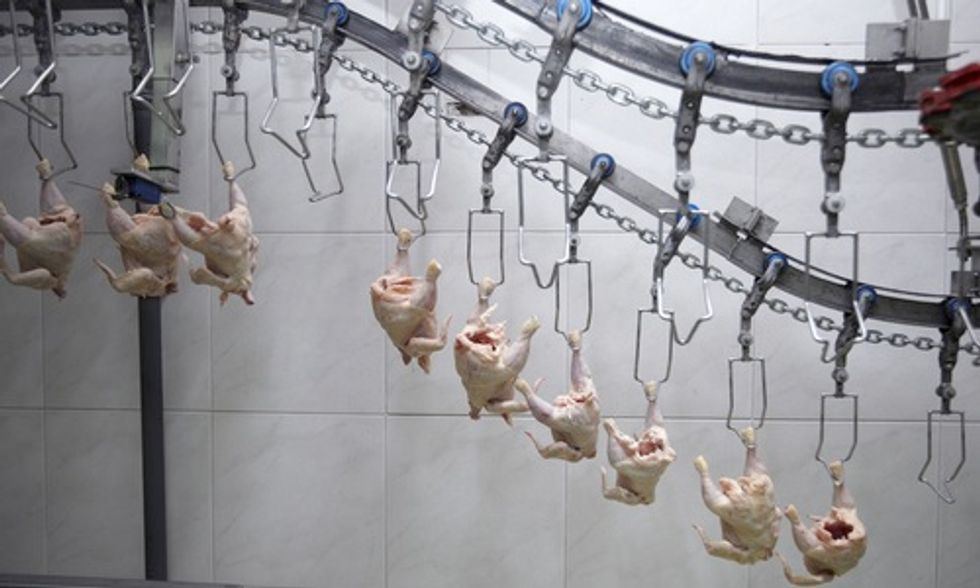 The  U.S. Department of Agriculture (USDA) unveiled a new plan Wednesday to reduce the number of salmonella outbreaks linked to meat and poultry.

Included is a controversial rollout of a pilot program that would speed up poultry processing lines and replace some USDA inspectors with plant employees. The proposal would increase line speeds in poultry plants to 175 chickens per minute from 140 and 55 turkeys per minute from 45.

The USDA said the new plan would focus inspectors more greatly on food safety, a change that could potentially reduce 5,000 illnesses a year. An estimated 1.3 million Americans are sickened by the bacteria each year. The USDA aims to reduce salmonella illnesses by 20,000 cases a year.

The effort comes weeks after Foster Farms chicken was found to have sickened at least 389 people nationwide with a virulent strain of salmonella found to be resistant to some antibiotics.

“Far too many Americans are sickened by salmonella every year. The aggressive and comprehensive steps detailed in the Salmonella Action Plan will protect consumers by making meat and poultry products safer,” Undersecretary for Food Safety Elisabeth Hagen said in a prepared statement.

Food safety and worker advocates have criticized the increase as dangerous for both employees and consumers. A recent Washington Post investigation found nearly 1 million chickens and turkeys were unintentionally boiled alive because of fast-moving factory lines.

“This flawed proposed rule cannot serve as the foundation of any serious plan to reduce salmonella rates in meat and poultry products,” Wenonah Hauter, director of Food & Water Watch, said in a media release.

“To really tackle the salmonella problem, USDA should not be trying to cut government inspection of poultry products. Instead, the Obama administration needs to get the legal authority from Congress to hold companies accountable for putting contaminated food into commerce, not deregulate inspection.”

Salmonella doesn’t trigger an automatic recall, as with E. coli outbreaks, because it’s not considered an adulterant. Health officials have been pushing the USDA to change that, arguing that more dangerous strains of salmonella resistant to antibiotics have emerged in recent years.

But unless the USDA deems salmonella an adulterant, it's often up to producers to issue a recall.

The U.S. Food Safety and Inspection Service has received hundreds of thousands of comments from consumers opposed to replacing some USDA inspectors with plant employees and worker safety advocates have raised serious concerns that poultry plant workers will suffer increased rates of injuries trying to keep up with increased line speeds, Hauter said.