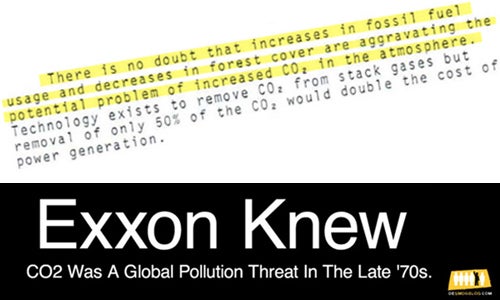 Throughout Exxon’s global operations, the company knew that CO2 was a harmful pollutant in the atmosphere years earlier than previously reported.

DeSmog has uncovered Exxon corporate documents from the late 1970s stating unequivocally “there is no doubt” that CO2 from the burning of fossil fuels was a growing “problem” well understood within the company.

“It is assumed that the major contributors of CO2 are the burning of fossil fuels … There is no doubt that increases in fossil fuel usage and decreases of forest cover are aggravating the potential problem of increased CO2 in the atmosphere. Technology exists to remove CO2 from stack gases but removal of only 50% of the CO2 would double the cost of power generation.” [emphasis added]

Those lines appeared in a 1980 report, Review of Environmental Protection Activities for 1978-1979, produced by Imperial Oil, Exxon’s Canadian subsidiary:

Click on any of the screenshots in this story to see a PDF of the full document.

A distribution list included with the report indicates that it was disseminated to managers across Exxon’s international corporate offices, including in Europe. 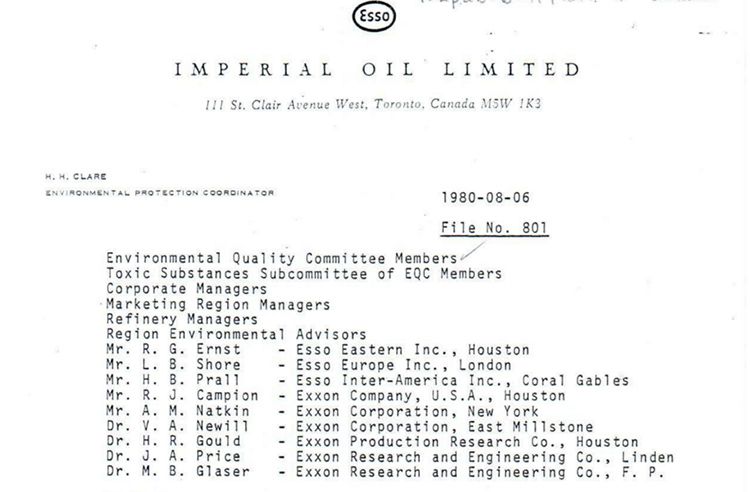 The next report in the series, Review of Environmental Protection Activities for 1980-81, noted in an appendix covering “Key Environmental Affairs Issues and Concerns” that: CO2 / GREENHOUSE EFFECT RECEIVING INCREASED MEDIA ATTENTION: 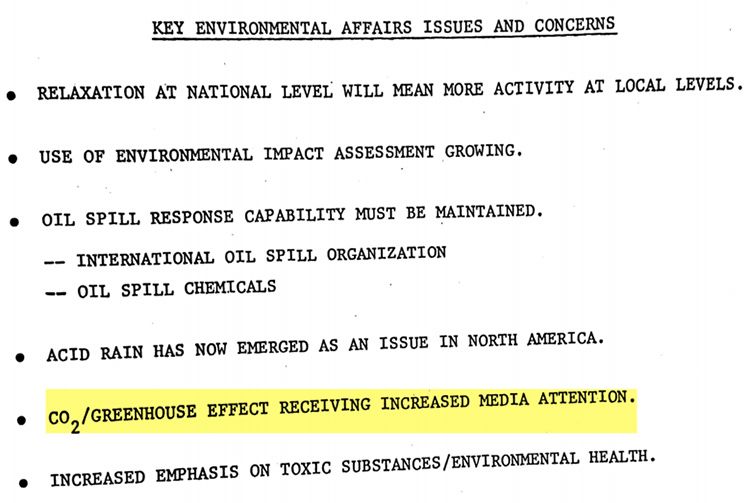 InsideClimate News unveiled much new information in its Exxon: The Road Not Taken series clearly demonstrating the depth of climate science knowledge among Exxon’s U.S. operations. Additional revelations about the company’s early climate research were published by the Los Angeles Times in collaboration with the Columbia School of Journalism.

“CO2 Greenhouse Effect: Exxon-supported work is already underway to help define the seriousness of this problem. Such information is needed to assess the implications for future fossil fuel use. Government funding will be sought to expand the use of Exxon tankers in determining the capacity of the ocean to store CO2.”

Now DeSmog’s research confirms that the knowledge of the carbon dioxide pollution threat was indeed global across Exxon’s worldwide operations, earlier than previously known and considered a major challenge for the company’s future operations. The new documents revealed Tuesday were found by DeSmog researchers in an Imperial Oil (TSE:IMO) archival collection housed at the Glenbow Museum in Calgary, Alberta. We first learned of the existence of the collection in one of the articles published in the Los Angeles Times in collaboration with the Columbia School of Journalism.