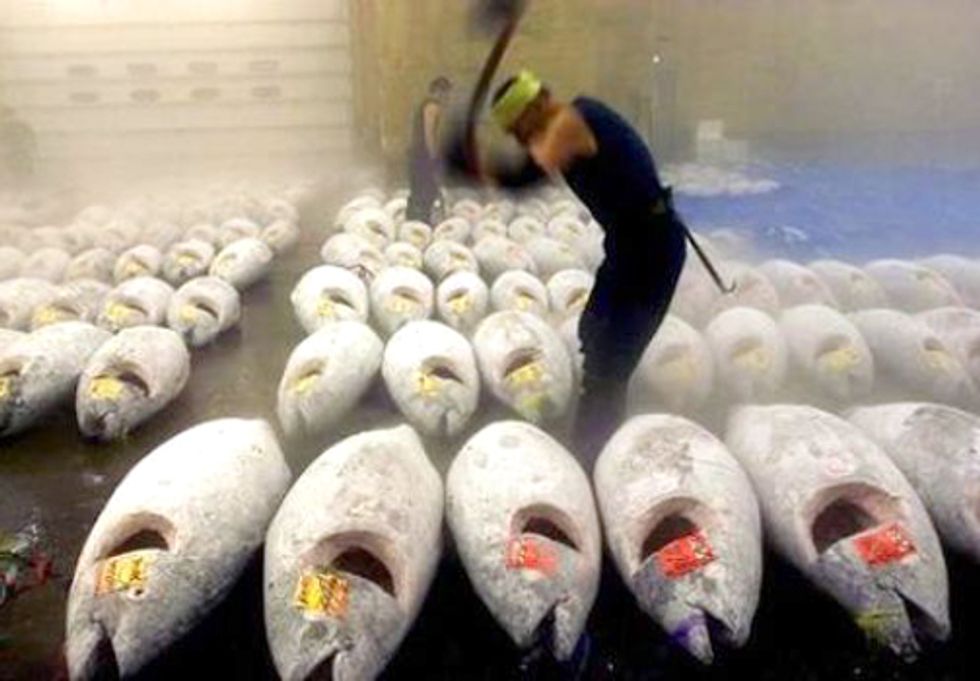 A new National Geographic Channel show, Wicked Tuna, focuses on a group of fishermen trying to catch one of ocean’s most majestic and imperiled fish, the bluefin tuna. The program comes at a time when key fisheries for bluefin tuna—highly migratory, warm-blooded ocean predators that weigh up to 1,500 pounds and reach 13 feet in length—are threatening to collapse under the weight of overfishing.

The show premiers this weekend, and though it does pay brief lip-service to the plight of the bluefin tuna, its focus is on the thrill of the chase for these increasingly severely threatened animals. Dwindling bluefin populations represent big money for the fishing industry: One extraordinary fish sold this year for $736,000.

“Bluefin tuna has been called ‘cocaine of the seas’ because of the astronomical prices it fetches as luxury sushi. Its economic value should encourage us to save the species to sustain tuna fisheries into the future. Instead, we’re seeing places like the National Geographic Channel buy into bluefin fever, glorifying the chase for one of the most troubled fish on the planet,” said Catherine Kilduff of the Center for Biological Diversity, which launched a U.S. boycott of bluefin tuna in 2010 following dramatic declines in its populations.

Western Atlantic bluefin tuna, which spawns in the Gulf of Mexico, have been reduced to 17 percent of 1950 levels. The National Marine Fisheries Service in June 2011 listed the bluefin tuna as a “species of concern” after the Deepwater Horizon oil spill but refused to protect the fish under the Endangered Species Act.

Despite declines, bluefin tuna remain a top-dollar item at many sushi restaurants in the U.S. and on the international market. Wicked Tuna’s fishermen hope to sell each fish caught for about $10,000.

“Bluefin tuna need help, not a TV show glorifying the hunt for them,” Kilduff said. “If we keep going down this road, these fish face the very real prospect of extinction, and one of the mightiest fish ever to swim the oceans will be gone forever.”

Atlantic bluefin tuna (Thunnus thynnus) are capable of swimming more than 55 mph; they include two genetically distinct populations, one that spawns in the Mediterranean (the “eastern Atlantic” stock) and a much smaller population that spawns in the Gulf of Mexico (the “western Atlantic” stock). Bluefin tuna are threatened by overfishing, capture for tuna ranches and changing ocean and climate conditions.

For more information about the Center’s campaign to save the Atlantic bluefin tuna, click here.