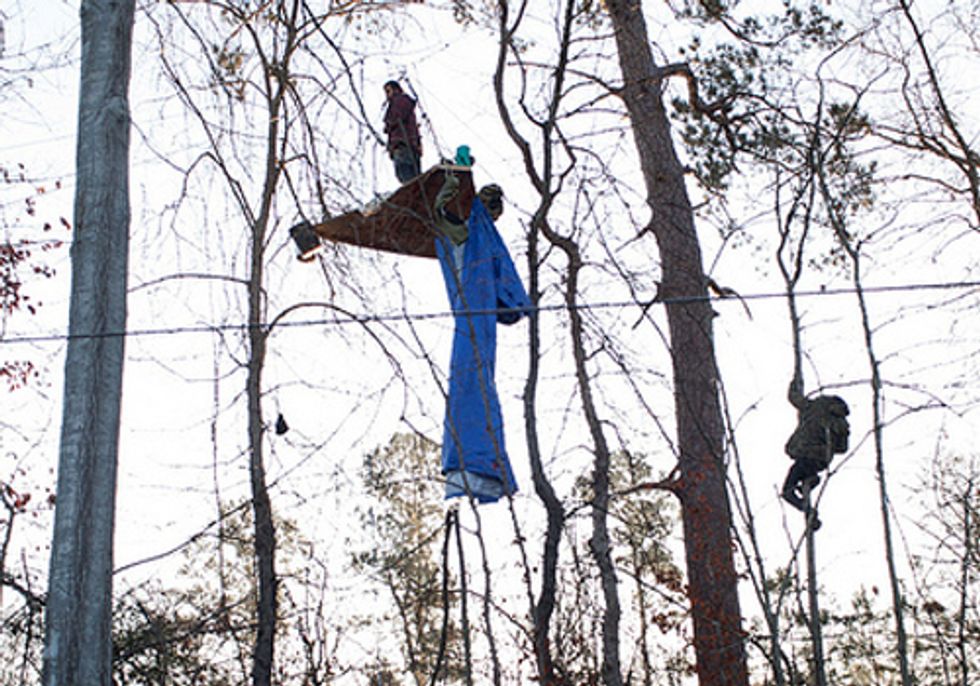 [Editor's note: Since the posting of this piece, there have been many updates on this action. Visit Tar Sands Blockade for the latest update.]

Late last night, blockaders set up two “dump platforms” in trees outside of Diboll, Texas which would otherwise be cleared to make way for TransCanada's Keystone XL toxic tar sands pipeline. These special “dump platforms” are shielded by an unprecedented 80-100 foot perimeter of life-lines arranged, which if disturbed would certainly dump the two blockaders nested in them roughly 50-60 feet in the air. The blockaders are sitting in soldarity with the now global Idle No More campaign for First Nation's human rights and tribal sovereignty that very recently started in Canada.

This new tree blockade comes just a couple weeks after the end of Tar Sands Blockade’s 85-day tree-sit near Winnsboro, TX. TransCanada rerouted the tar sands pipeline to go around the Winnsboro tree-sit, despite having told countless landowners, including Douglass resident Mike Bishop, that the route was set in stone and could not be altered to avoid bulldozing their cropland, or to go around schools, neighborhoods or ecologically sensitive areas.

This new site is surrounded by barriers like Highway 59, railroad tracks and Ryan Lake. With these nearby, blockaders have found a location around which the pipe cannot easily be rerouted.

The viability of this blockade depends entirely on the safe conduct of TransCanada and local police forces. They could easily end it by cutting ropes and seriously injuring or killing the tree sitters. Blockaders Audrey and Mike know the risks. They are prepared to stay on their platforms, just big enough to lie down on, indefinitely, to defend their collective home from the expansion of tar sands exploitation that Keystone XL would usher in.

“Protecting the living systems which we’re a part of is a moral necessity,” shared Audrey, who is sitting in a singular tree left in a newly-cleared field. “Extraction of the tar sands is the most destructive project on the continent. It threatens the integrity of the entire biosphere, not to mention the First Nations dependent upon access to clean water, land, and air for the health and food for their tribal communities.”

Mike, the other sitter suspended in a 50 foot skypod between two trees, agreed, “That their plight has been so long ignored by industry and policy-makers is a clear violation of their human rights and a crime of conscience. That's why we are enthusiastically supporting the Idle No More movement!”

“Institutional methods of addressing climate change have failed us,” explained Ron Seifert, a Tar Sands Blockade spokesperon. “Rising up to defend our homes against corporate exploitation is our best and only hope to preserve life on this planet. We must normalize and embrace direct, organized resistance to the death machine of industrial extraction and stand with those like Idle No More who take extraordinary risk to defend their families and livelihoods.”