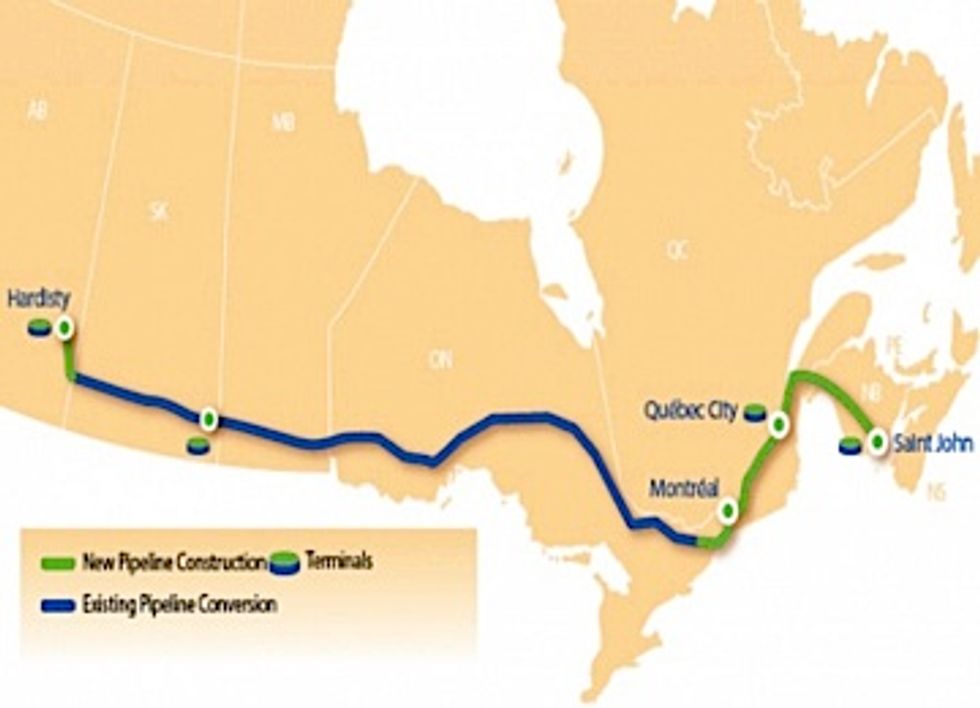 TransCanada Corporation announced yesterday they will proceed with plans to create a pipeline capable of shipping 1.1 million barrels per day (bpd) of oil and tar sands bitumen from western Canada to refineries and ports in Quebec and New Brunswick. Called "Energy East", this west-to-east pipeline would dwarf the oil delivery capacity of TransCanada's proposed Keystone XL pipeline in the U.S. (830,000 bpd).

"This is an historic opportunity to connect the oil resources of western Canada to the consumers of eastern Canada, creating jobs, tax revenue and energy security for all Canadians for decades to come," said Russ Girling, TransCanada's president and chief executive officer, in a statement.

It remains unclear how much of Energy East's oil will be exported outside of Canada and how much tar sands bitumen will be shipped through the pipeline.

Eastern Canadian refineries are not outfitted to refine large quantities of bitumen. TransCanada has stated the Energy East project will involve shipping oil to "existing North American markets" but there is speculation Europe or Asia could be possible destinations for the pipeline's oil.

Energy East will be 4,400 kilometres of pipeline from Hardisty, Alberta to Saint John, New Brunswick. Three thousand kilometers of this pipeline already exists as a 55-year old TransCanada natural gas line that will be converted to carry oil. Another 1,400 kilometres (the equivalent of building a Northern Gateway) of new pipeline will be constructed from the Quebec-Ontario border to Saint John.

The Assembly of First Nations' Chiefs in New Brunswick announced today they "will avail themselves of any means necessary, legal or otherwise" if Energy East threatens their treaty rights or the environment. Yesterday the Council of Canadians unveiled a nation-wide campaign to stop the Energy East pipeline.

“While using an existing pipeline may reduce TransCanada’s costs, it increases spill risks for the many rivers, lakes and communities along the route,” said Andrea Harden-Donahue, energy campaigner with the Council of Canadians, in a press release.