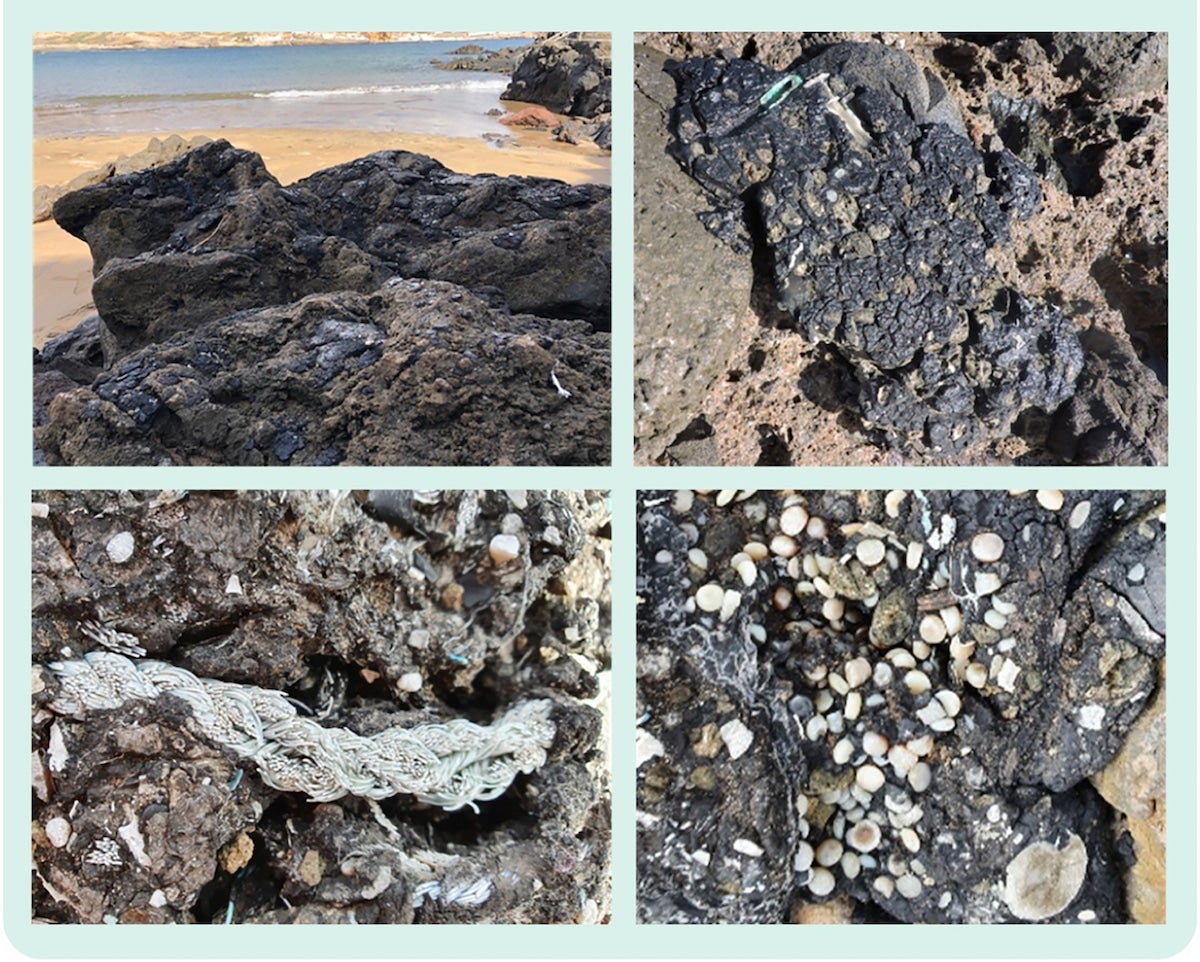 Photographs of plastitar at Playa Grande Beach, Tenerife in December 2021. Science of The Total Environment

Plastic pollution in the oceans. Microplastics. Oil spills. Each of these items is already a distinct crisis. But researchers in the Canary Islands have coined a term for a new type of pollution they are finding in their studies: plastitar. According to the scientists, plastitar is washing up around shores of islands and consists of tar balls, often found after oil spills, and microplastics.

“No longer is the presence of plastic in the environment limited to microplastics or a bottle in the sea,” Javier Hernández-Borges, associate professor of analytical chemistry at the University of La Laguna in Tenerife, told The Guardian. Hernández-Borges coined the term plastitar. “Now it’s giving rise to new formations; in this case, one that combines two contaminants.”

Scientists first noticed the tar balls coated in plastic fragments two years ago and have now shared this worrisome finding in the journal Science of the Total Environment. The discovery joins other new formations of plastic pollutions taking over the marine environment, including pyroplastics (melted plastic pieces that resemble rocks) and plastiglomerates (the accumulation of melted plastic, basalt lava pieces and coastal sediments).

As for the newly defined plastitar, it consists of tar balls, or pieces of sticky, hardening tar from oil spills, that collects plastic fragments in the water.

“It acts like Play-Doh,” Hernández-Borges explained. “And when waves carrying microplastics or any other kind of marine debris crash on to the rocks, this debris sticks to the tar.”

The tar eventually hardens, creating a new formation of remnants from oil spills and tiny pieces of plastic from various sources.

Researchers found the plastitar at several islands within the Canary Islands and suspect these formations can be found in other parts of the world as well. The plastic fragments studied were overwhelmingly polyethylene, the most common type of plastic globally. Polyethylene is used for everything from cling wrap and plastic bags to detergent bottles and milk jugs. It’s also found in housewares, toys, and other ubiquitous objects.

The makeup of the plastitar has researchers concerned about potential toxic leaching into marine environments.

“Polycyclic aromatic hydrocarbons (PAHs) present in tar, which are persistent organic pollutants that can bioaccumulate, have moderate to high acute toxicity to aquatic organisms. They can also act as endocrine disruptors and be carcinogenic, among others,” the study warned. “Its combination with plastic materials clearly supposes a double threat to the marine ecosystem with unknown environmental consequences, since plastics can be ingested by marine organisms causing intestinal blockage, internal injuries, oxidative stress and damage, inflammatory responses, among other important issues.”

The study authors stress that more research is needed on the environmental threats this newly defined type of pollution could pose to marine life.