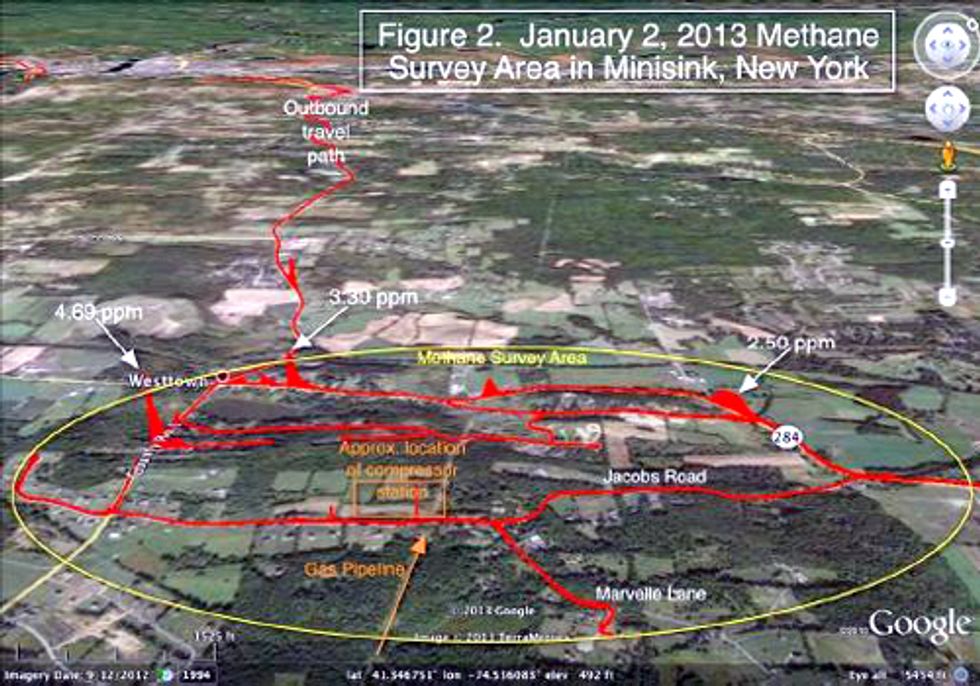 After gas related activities come to a region, homeowners frequently discover methane (and other materials) in their water and/or air. However, they have little recourse because gas and gas pipeline companies persistently deny that their activities generated these releases, claiming that high levels of methane were present before they began drilling, or installing compressors or pipelines.

A test that can measure ambient methane levels now proves-or disproves the truth of these claims. A methane baseline was completed in Minisink, NY.

The Role of Methane Testing

Methane Baseline Testing is a form of laser spectroscopy used by GasSafetyUSA to accurately measure the ambient methane emissions in any area. "Before" and "after" tests can capture legally admissible evidence of changes in methane levels. High methane levels can also correlate with high levels of other compounds released with natural gas, such as radon and volatile organic compounds (VOCs), benzene and toluene.

"By documenting what was there to begin with, Methane Baseline Testing establishes causality and accountability for increases in methane levels," says Barbara Arrindell, director of Damascus Citizens for Sustainability, a Delaware River Basin based scientific and legal environmental watchdog group.

Last month, GasSafetyUSA undertook Methane Baseline Testing in Minisink, New York, the site of a compressor station, which Millennium Pipeline, a subsidiary of NiSource (NI), which has just become Columbia Pipeline Group has started to construct. Home to many 9/11 first responders, many of whom endure ongoing health issues, citizens in the town of Minisink have filed a federal lawsuit to halt construction of the compressor station in their town. According to the Federal Energy Regulatory Commission, the station is likely to release nearly 62,000 tons of methane emissions and 100 tons of VOC's annually. A study done by the Rand Corporation found that, "The most significant emissions and the ones that are going to be the longest-term are … (those) … associated with the compressor stations."

Covering the public roads in the area around the Minisink compressor site, GasSafetyUSA recorded and established that there are currently only normal low levels of pre-existing methane in Minisink. "The test results demonstrate Minisink is now a clean area and that the compressor station will trigger an excessive and irreparable change to our local environment," says Pramilla Malick, the spokeswoman for Stop the Minisink Compressor Station.

"Testing places the legal and financial liability for any changes squarely back on the companies who own and operate the proposed compressor," says Arrindell. Accessing this data prior to gas-related activities-and retesting afterward serves as a form of "insurance" for communities like Minisink, which seek to redress pollution once it occurs. "Every single one of the 239 home owners and organic farmers within a half-mile of the proposed site will hold the company and the regulatory agencies accountable for this erosion of their air quality along with any adverse health and community impacts that result," Malick warned.

A residential and agricultural community, Minisink isn't zoned for industrial use. Malick points out that, "Building at a nearby location, which is available, would lessen by forty-four percent both air emissions and fuel use. The test results show that Millennium will unnecessarily contaminate a pristine rural/residential community."

"With this technology, companies can no longer leave behind contaminated air and water with impunity," says Arrindell. "We urge any community concerned about health effects and pollution from gas drilling, compressor stations or pipelines to utilize this method to help protect property values, and families and community health," says Arrindell.