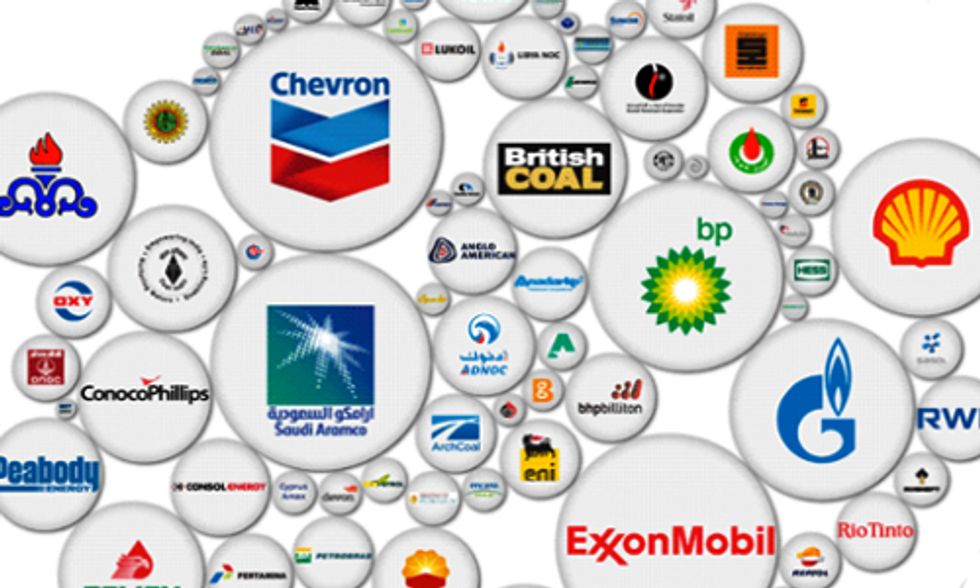 New peer-reviewed research has found that just 90 entities are responsible for extracting most of the fossil fuels that have been burned over the past 150 years. These “carbon majors” include 50 investor-owned companies, such as ChevronTexaco and Exxon-Mobil, 31 state-owned companies, such as Saudi Aramco and Pemex, and nine government-run industries in the former Soviet Union, China and other countries.

Emissions from burning these fuels total nearly two-thirds of all the carbon that has been emitted into the atmosphere during the industrial era.

New research finds that just 90 institutions are responsible for two-thirds of global carbon emissions in the industrial era. Graphic courtesy of Carbon Visuals

Researcher Rick Heede spent eight years combing through the publicly available data at the heart of the analysis. A paper was just published in the journal Climatic Change.

“This opens the books on where the industrial sources of carbon dioxide in our atmosphere ultimately came from,” Heede said. “This is the most complete picture we have of which institutions extracted coal, oil and natural gas and when. These are the companies and institutions that have created the products— used as intended—by billions of consumers that have led to persistently higher levels of atmospheric carbon dioxide and methane.”

In many cases, multinational companies have extracted more than most countries. The top ten carbon majors include ChevronTexaco, Exxon-Mobil, BP and Royal Dutch Shell, along with government-run industries in the former USSR, China and Poland, as well as the nationally owned Saudi Aramco, Gazprom and the National Iranian Oil Company.

The largest investor-owned producers weigh heavily in the analysis. The top 20 produced fuels that comprised 29.5 percent of emissions, while the top 10 account for 15.8 percent. Five "oil majors," ChevronTexaco, ExxonMobil, BP, Shell and ConocoPhillips account for a total of 181 gigatonnes of carbon dioxide over the past 130 years, amounting to 12.5 percent of total carbon emitted to the atmosphere.

“When you can trace the lion’s share of humanity’s carbon emissions from fossil fuel use since the invention of the steam engine to a few dozen companies that have produced those carbon fuels, the story becomes more powerful than just looking at emissions on a country-by-country basis,” Heede explained. “You can look at this as coming from seven billion people or two hundred countries, or you can look at it as coming from these institutions, the heads of which could all fit on a bus together.”

Heede’s analysis accounts for the complicated partnerships, mergers and changes in ownership that have occurred over the past century and a half. Heede says he also had to be careful to avoid double-counting extraction since companies often rely on subsidiaries or contractors to drill and produce fuels. Further, the study only counted carbon from entities that extracted enough fuel to produce eight megatons worth of potential emissions in a given year.

Heede’s data could open up new opportunities to investigate the impacts that burning these fuels have had—and will continue to have—on the climate.

“Scientists could use this data to zoom in on the relationship between extracting fuels and changing the climate,” said Dr. Michael MacCracken, chief scientist for climate change programs at the Climate Institute. “That’s an exciting prospect since most current studies necessarily have to take a broad brush view of emissions by country."

Harvard science historian Naomi Oreskes noted that Heede’s research points to an evolving trend in climate science. "Many people argue that 'we are all responsible for climate change.' But this research shows that's a misleading statement, because some of us have used and profited from fossil fuels much more than others,” Oreskes said. “This study gives us some data to jump-start a discussion that more accurately addresses the responsibility issue."

Heede has previously published emissions inventories for non-governmental organizations, universities and businesses. He holds a master’s degree in geography from the University of Colorado.

Heede’s research was initially supported by Friends of the Earth and has received additional support from the Climate Justice Programme, Greenpeace International and the Union of Concerned Scientists. Heede’s full methodology report, which Climatic Change did not have space for, is available on his website.