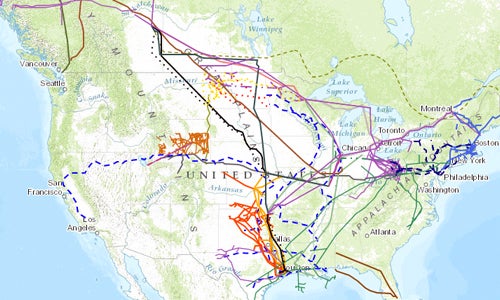 Now that we as a nation have weathered another silly season’s worth of campaign ads, lawn signs and less than insightful debates between the country’s two—and in the case of Vermont’s gubernatorial election, seven—parties; it is time to get down to the job of governing this fine country and finding potential legislation that everyone can agree upon.

However, this will come with numerous attempts to abrogate U.S. Environmental Protection Agency (EPA) regulations to cut greenhouse gas (GHG) emissions via the Congressional Review Act, investigations and defunding lead by likely chair of the Senate Environment and Public Works Committee James M. “The Greatest Hoax” Inhofe (R-OK). Enter stage right the Keystone XL pipeline and statements like these from the GOP leadership and former Obama officials:

“We can act on the Keystone pipeline,” said House Speaker John Boehner (R-OH).

“When you say energy these days, people think of the Keystone pipeline … I mean, the employment figures connected with Keystone are stunning if we would just get going. [And I will] try to do whatever I can to get the EPA reined in,” said Senate majority leader, Mitch McConnell (R-KY).

“If Republicans attach Keystone to a budget bill, I don’t think he’s so principally opposed to it that he would veto it,” stated Former Obama State Department Bureau of Energy Resources lead David Goldwyn.

As anyone reading this knows by now, the Keystone XL is a highly controversial—but just one of many—proposal to create a N-NW to S-SW pipeline connector to the existing Keystone across Montana, South Dakota, the SW corner of North Dakota and Nebraska. The proposal would connect with the existing Keystone 55-60 miles southwest of Lincoln, Nebraska. This proposal is contentious for many reasons, one of which is the fact that it would cut across Nebraska’s Sand Hills, Kansas’ Flint Hills, and the region’s Great and Glaciated Plains natural area sand sit just above the shallow 174,000 square miles of the Ogallala Aquifer, which provides drinking water to 1.9 million people and irrigation to 27 percent of the arable land in the U.S.

As soon as it was obvious at around 10:30 p.m. EST that there would be a sea change in DC with the GOP ousting floundering DNC incumbents or challengers, both sides turned to potential points of compromise with topics like immigration, tweaking Obamacare at the margins, etc. receiving quite a bit of air time. Top among these is revisiting the Keystone XL expansion as the ultimate olive branch the administration could offer to its friends across the aisle. It is worth noting that as our politicians continue to debate the science of climate change and do all they can to ramp up our already disproportionate reliance on fossil fuels across the pond, the political consensus in countries like Denmark and Germany is nearly unanimous that their energy portfolios should exceed 50 percent by 2020.

Both parties have their boutique or “go-to” studies supporting their point of view as it relates to Keystone XL job multiplier, oil production and environmental cost-benefit analyses but very few, if any, have analyzed the past, current and potential footprint of the Athabasca and Peace River Oil Sands as it relates to above- and below-ground ecosystem service loss resulting from land-use/land-cover (LULC) change. Even the province of Alberta presents an ESRI online map of current and proposed oil sands projects. Alberta oil sands has increased by 1,455 percent from its early annual averages of 50 Million Barrels (MBs) to its current annual average of 725+ (Figure 1). 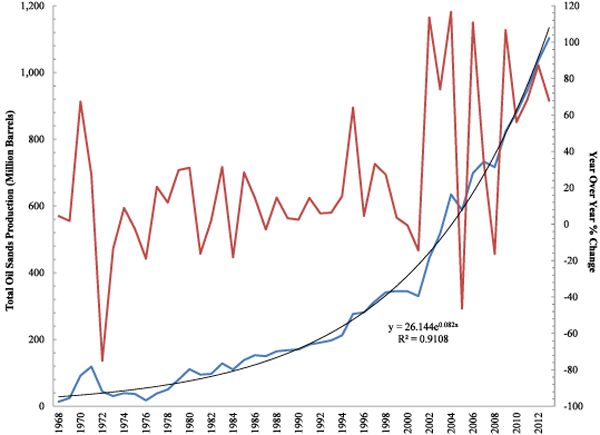 Just like similar fossil fuel and related industries’ activities (i.e. frack sand mining and freshwater withdrawals), oil sands production has reached an exponential inflection point which shows no signs of slowing and likely is accelerating with calls for “energy independence,” OPEC “foreign radicals,” and the seemingly insatiable appetite for energy in developed countries as well as the growing affluence of countries like Brazil, Russia, India and China (aka Goldman Sachs’ BRICs)[1]. The increasingly conservative and fossil fuel-infatuated Canadian government lead by Stephen Harper has already put all its eggs in the oils sands’ basket as a primary overseas export engine of GDP growth. Harper & Co. are not waiting for DC to get its Keystone house in order with their Saint John, New Brunswick Energy East pipeline proposal which we have documented here and here. But make no mistake. Decisions made in the coming months and years in DC will dramatically influence the rate of oil sand expansion in Alberta. And with the winds pointing in the direction of Keystone approval, it is imperative that we understand how much oil sands LULC change has degraded ecosystem services and how it may change in the future under a variety of scenarios.

Put another way, the total potential Athabasca footprint spread across 53 unique polygons totals 71,878 square kilometers—meaning the percent that has been physically exploited to date accounts for 1.1 percent of the available area and the “actual footprint” comes in at around 6.7 percent of the potential. Translation: the calculations we present here for ecosystem loss are just the tip of the iceberg if Canadian and Chinese officials, as well as, our congress get their way with respect to the Keystone XL expansion. 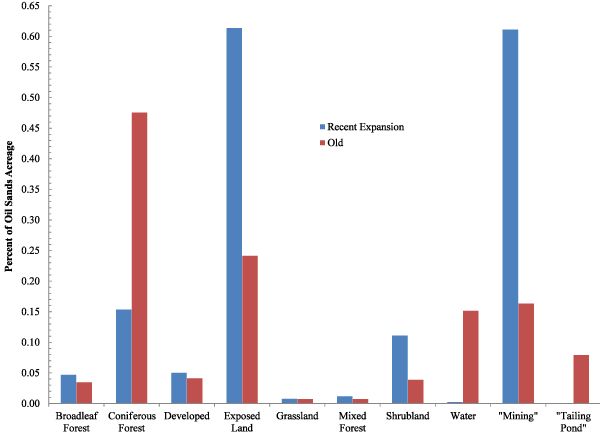 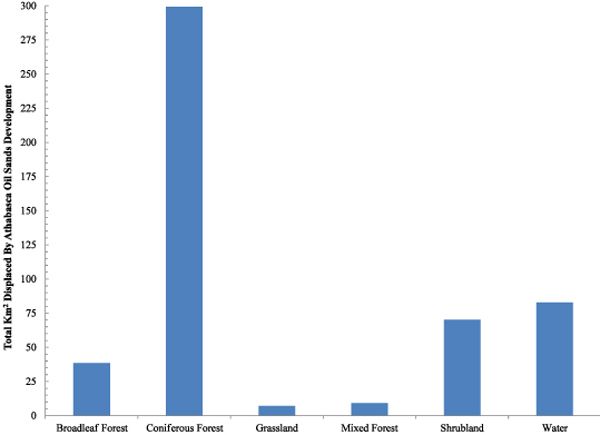 Current and Past Oil Sands Exploitation

Below we present ecosystem loss in terms of tons of carbon dioxide (CO2), Per Capita Equivalents and in terms of U.S. dollars, assuming $5 and $75 per ton of CO2:

The Total Athabasca and Piece River exploitation scenario outlined above amounts to 4.3 percent of global CO2 emissions from the burning of fossil fuels. And if we assume the aforementioned 20-21 year fire interval, this would amount to 87.8 percent of global annual emissions—an extremely disturbing number given that we have already surpassed 350.org and Jim Hansen’s proposed atmospheric concentration tipping points at a rate of 1.02 percent per year with exploitation of the Alberta oil sands likely to amplify this rate of change in parallel with the above results.

Finally, this is not just a story about CO2, but also two other primary GHGs: CH4 and N2O. If we assume a reasonably constant ratio of CO2 to these GHGs [3]—which is admittedly a gross oversimplification given the large amounts of CH4 and N2O currently being emitted from melting permafrost soils—these rates of CO2 emissions will be accompanied by 481.8 TG worth of annual CH4 and N2O emissions or a fire interval value of 9,821.6 Tg which would add an additional 7.2 years worth of U.S. fossil fuels emissions equivalents to the atmosphere.

So before we decide to give carte blanche to the big players in the Athabasca and the folks at TransCanada, it will be important to discuss frankly and empirically what an atmosphere enriched with the above would mean for our way of life in the long-term rather than simply focusing on short-term royalty and ephemeral job multiplier numbers presented by industry and the politicians they have long been supporting financially.

The way U.S. and Canadian politicians and industry have been promoting the Keystone XL and Athabasca Oil Sands is equivalent to you or I assuming that we are balancing our checkbook if we keep scrupulous records of deposits, but only occasionally if ever, address withdrawals. That is no way to balance our personal finances or this planet’s environmental finances (in my humble opinion). The long-term externality costs associated with the Keystone XL expansion are largely environmental in nature and will be socialized, while the short-term financial windfall profits will be privatized. It is going to be important to incorporate the costs described above into our planetary checkbook analogy.

[1] State owned Petro-China recently took a 60 percent claim in two oil sands projects which is its largest extra-territorial investment to date according to the The National Post.

[2] Keep in mind the vegetation in this region is cleared by fire every 20-21 years meaning this 1,369.4 Tg is actually more like 27,914.1 Tg if we assume a constant rate of biomass accrual. The latter figure is nearly equal to 20.5 years of U.S. CO2 emissions from the burning of fossil fuels.

Divest or Else: How Hip-Hop Can Help Save the Planet