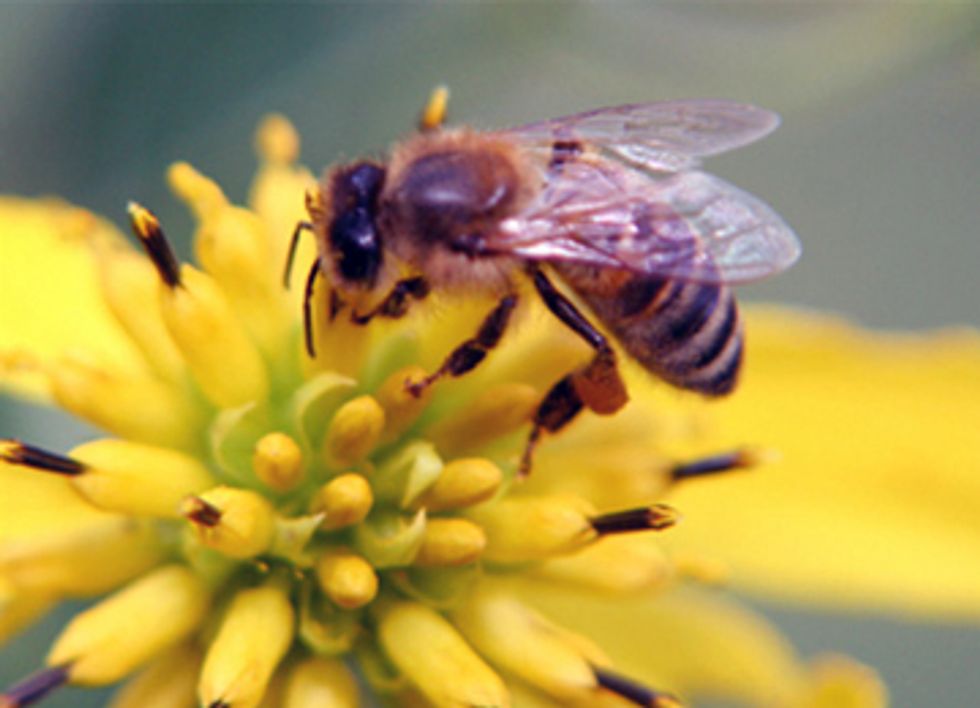 Researchers at the U.S. Department of Agriculture (USDA) and University of Maryland have found that low levels of pesticide exposure from crop pollination make honey bees more susceptible to the deadly gut parasite Nosema ceranae, contributing to declines in bee populations.

The study’s findings, released July 24 in the journal PLoSONE, expand on a recent report released by the USDA that found parasites, disease, genetics, poor nutrition and pesticide exposure as synergistic factors in the observable nationwide honey bee decline, but focused on technological stopgap measures without questioning the sustainability of widespread systemic neonicotinoid pesticide use. Adding urgency to USDA’s research, another study released July 22 in the Proceedings from the National Academy of Sciences shows that pollinator losses can have a detrimental effects on plant reproduction.

Pesticide Exposure and Susceptibility to Disease

In sum, researchers found 35 different pesticides in pollen, with samples containing, on average, nine different pesticides ranging  in classes from oxadiazines, neonicotinoids, carbamates, cyclodienes, formamidines, organophosphates and pyrethroids. Of these, the report links eight pesticides as increasing the risk of Nosema gut parasite infestations. Researchers most frequently found fungicides in pollen samples, particularly chlorothanlonil, which is a broad spectrum fungicide ubiquitously used on apples and other crops. The presence of fungicides is of particular concern. Not only do fungicides increase risks of infection with deadly Nosema parasites, but they also generally do not carry warning labels to tell farmers to refrain from application while crops are blossoming and bees are foraging, that is, when bees are most susceptible to pesticide poisoning.

Lead researcher Jeff Pettis, PhD at the Bee Research Laboratory in Beltsville, MD explained that honey bees that were fed pollen containing the fungicide chlorothalonil and collected at the hive entrance were almost three times more likely to become infected when exposed to the parasite Nosema, compared with control bees, which were not fed contaminated pollen.

The study shows that honey bees cannot sustain regular exposure to the vast array of agricultural chemical combinations that weaken honey bee immune systems and make them more susceptible to Nosema infestation. The majority of studies up to this point have examined honey bee exposure to only one chemical at a time.

Surprisingly, researchers also found that pesticides were evident in every single pollen sample, even those that were collected from nearby wildflowers that were not sprayed. Co-author Dennis vanEngelsdorp, PhD at the University of Maryland explained “It could be drift from when they sprayed their crop, but it also could be that the bees are picking it up and contaminating the pollen on the forage trip.” Whatever the cause, he continued, we “need to better understand how pesticides are getting into the hive. Clearly it is not just from collecting pollen from the crops that bees are being used to pollinate.”

Adding to the growing body of research on pollinator declines, another study published last week shows that the decline of a single pollinator species significantly impairs plant reproduction. The study, Single pollinator species losses reduce floral fidelity and plant reproductive function, was published in the Proceedings of the National Academy of Sciences, out of the Rocky Mountain Biological Laboratory in Crested Butte, CO.

Researchers examined 20 plots of meadow in the region, removing the most populous bumblebee species out of each plot, and patrolling them regularly to determine whether other pollinator species could fill the shortage for wildflower pollination. Instead, researchers found that in the absence of bumblebees, pollinator species foraged more widely, becoming less devoted to one flower species. Researchers specifically focused on the purple larkspur wildflower, and found that with broader foraging patterns, larkspurs were less likely to receive pollen from the same species, which is required for successful pollination. Because of changes to pollinator assemblages, larkspurs then produced 30 percent fewer seeds. These results demonstrate the wider consequences that loss of pollinators to pesticides can have on plant reproduction as well as ecosystem health.

Since 2006, honey bees nationwide have suffered ongoing and rapid population declines, from hive abandonment and bee die-off in a phenomenon known as colony collapse disorder (CCD). The causes are numerous, however, recent scientific evidence points to the role of a systemic class of pesticides, neonicotinoids, which contaminate pollen, nectar and the wider environment, causing lethal exposure to honey bees and threatening our food systems. An extensive overview of the major studies showing the effects of neonicotinoids on pollinator health can be found on Beyond Pesticides’ What the Science Shows.

In response to massive pollinator declines, recent legislation proposed by Reps. John Conyers (D-MI) and Earl Blumenauer (D-OR), H.R. 2692, The Save America’s Pollinators Act, has called upon the U.S. Environmental Protection Agency to suspend the use of neonicotinoids and to conduct a full review of scientific research before allowing the entry of other neonicotinoids into the market. Tell your Representative to Save America’s Pollinators.