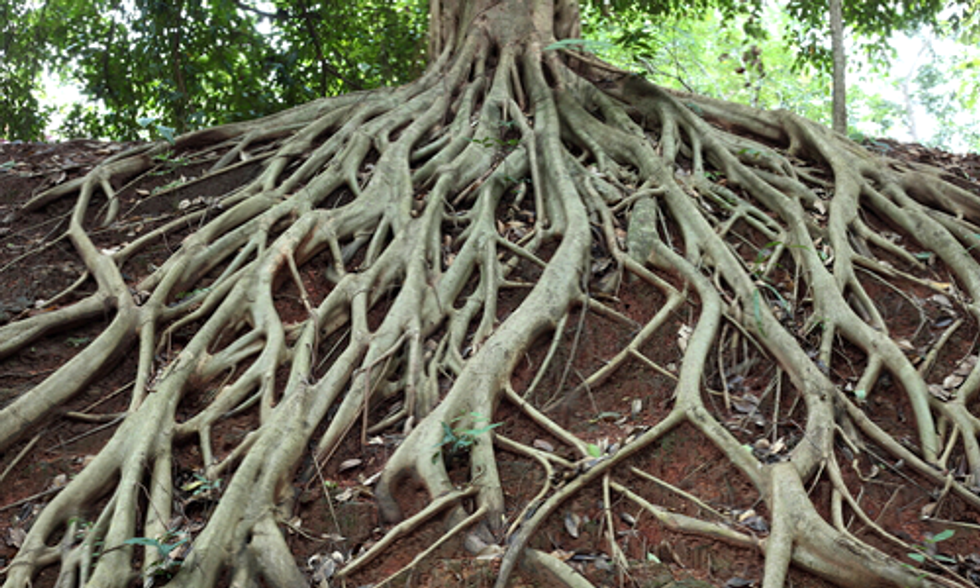 Trees have become a source of continuous surprise. Only weeks after researchers demonstrated that old forest giants actually accumulate more carbon than younger, fast-growing trees, British scientists have discovered that the great arbiters of long-term global temperatures may not be the leaves of an oak, pine or eucalyptus, but the roots.

They get into the bedrock, and break up the rock into its constituent minerals. Once that happens, the rock starts to weather, combining with carbon dioxide. This weathering draws carbon dioxide out of the atmosphere, and in the process cools the planet down a little. So mountain ecosystems—mountain forests are usually wet and on conspicuous layers of rock—are in effect part of the global thermostat, preventing catastrophic overheating.

The tree is more than just a sink for carbon, it is an agency for chemical weathering that removes carbon from the air and locks it up in carbonate rock.

That mountain weathering and forest growth are part of the climate system has never been in much doubt: the questions have always been about how big a forest’s role might be, and how to calculate its contribution.

U.S. scientists recently studied the rainy slopes of New Zealand’s Southern Alps to begin to put a value on mountain ecosystem processes. Dr. Doughty and his colleagues measured tree roots at varying altitudes in the tropical rain forests of Peru, from the Amazon lowlands to 3,000 meters of altitude in the higher Andes.

They measured the growth to 30 cm below the surface every three months and did so for a period of years. They recorded the thickness of the soil’s organic layer, and they matched their observations with local temperatures, and began to calculate the rate at which tree roots might turn Andean granite into soil.

Then they scaled up the process, and extended it through long periods of time. Their conclusion: that forests served to moderate temperatures in a much hotter world 65 million years ago.

“This is a simple process driven by tree root growth and the decomposition of organic material. Yet it may contribute to the Earth’s long-term climate stability," Dr. Doughty said. "It seems to act like a thermostat, drawing more carbon dioxide out of the atmosphere when it is warm and less when it is cooler.”

If forests cool the Earth, however, they might also warm it up. A team from Yale University in the U.S. has reported in Geophysical Research Letters that forest fires might have had an even greater impact on global warming during the Pliocene epoch about three million years ago than carbon dioxide.

Dr. Nadine Unger, an atmospheric chemist, and a colleague have calculated that the release of volatile organic compounds, ozone and other products from blazing trees could have altered the planet’s radiation balance, by dumping enough aerosols into the atmosphere to outperform carbon dioxide as a planet-warmer.

In fact, the Pliocene was at least two or three degrees Celsius warmer than the pre-industrial world. The Pliocene is of intense interest to climate scientists: they expect planetary temperatures to return to Pliocene levels before the end of the century, precisely because humans have cleared and burned the forests, and pumped colossal quantities of carbon dioxide into the atmosphere. The greater puzzle is why a rainy, forested and conspicuously human-free world should have been so much warmer.

“This discovery is important for better understanding climate change through Earth’s history, and has enormous implications for the impacts of deforestation and the role of forests in climate protection strategies,” Dr. Unger said.

All this scholarship is concerned with the natural machinery of ancient climate change, and the Yale research was based on powerful computer simulations of long-vanished conditions that could not be replicated in a laboratory.

Meanwhile, ironically, forest scientists have had a chance to test the levels of volatile organic discharges from blazing forests because freakish weather conditions in Norway have seen unexpected wild fires in tracts of mountain forest. December was one of Norway’s warmest winter months ever. In one blaze, 430 residents were forced to evacuate.