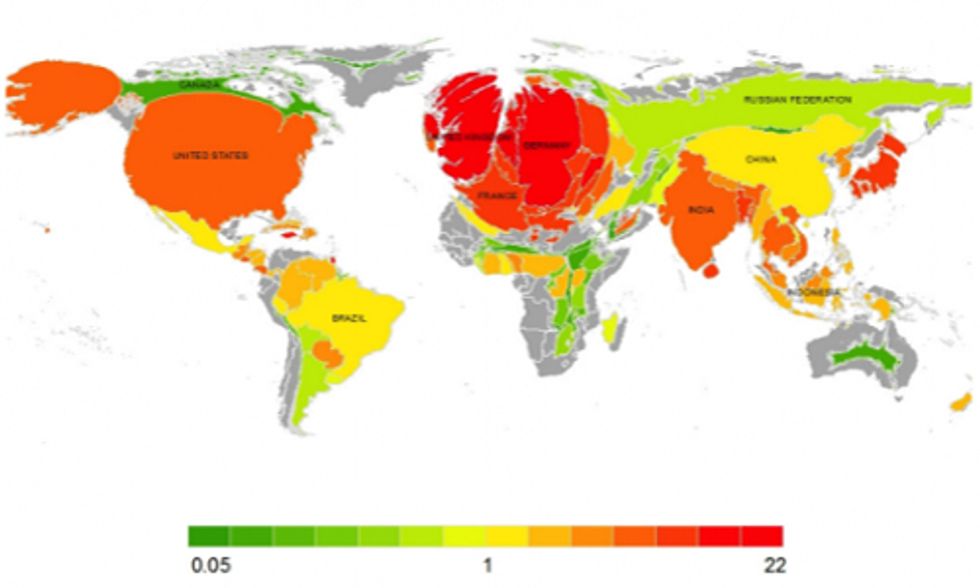 A new study aims to offer unique insights into countries’ historical responsibility for global warming, by translating their carbon emissions into a proportion of observed temperature rise.

How responsible different countries’ are for climate change to date has long been a contentious issue. Contributing differently to the build-up of greenhouse gases in the atmosphere, some countries are considered more to blame for warming than others.

Cartogram of national climate contributions (density-equalized map). Here, the geographic area of each country has been scaled such that the colored area is proportional to its climate contribution. The color scale shows the amount by which a country’s size is expanded or contracted relative to its original size. Credit: Matthews et al.

The study, by scientists from Concordia University in Canada and published in Environmental Research Letters, examined each country’s emissions between 1750 and 2005.

As well as carbon dioxide from fossil fuel burning and land use change, they examined methane, nitrous oxide and sulphate aerosol emissions.

The researchers then looked at the relationship between these emissions and temperature rise—weighing each type of emission according to the lifetime of the temperature change it causes.

By working out how much each country has emitted, they were able to work out how much temperature rise it had caused.

Unsurprisingly the research showed how a small number of countries account for a large share of greenhouse gas emissions. Together, the U.S., China, Russia, Brazil, India, Germany and the UK have been responsible for 63 percent of emissions.

Using the new method, the U.S.—which takes top place in terms of historical emissions and contributing more than double the emissions of second place holder China—is responsible for 0.15 degrees Celsius of warming. That’s close to 20 percent of the total temperature rise witnessed so far.

Germany and the UK come in sixth and seventh—responsible for around five percent of emissions and 0.03 degree Celsius of temperature rise.

The researchers experimented with various methods of illustrating the difference between countries’ emissions.

They examined contribution to temperature rise relative to population size (per capita emissions).

National Per-capita contributions to climate warming. Colors indicate values above or below the global average, where orange and red are higher, and yellow and green are lower than the current (year 2005) world average of 0:11 C per billion people. Credit: Matthews et all.

Here China and India fall to the bottom of the rankings. The UK jumps to first place ahead of the U.S. when population size is considered—with the top seven countries all coming from the developed world.

Here countries, such as the UK and Japan jump up the rankings, having caused disproportionately more warming than the size of their country would suggest, while Canada and Australia fall down the table.

Understanding countries’ total historical emissions is a hugely complex task—and the researchers warn the latest results should be considered as a “reasonable best guess.”