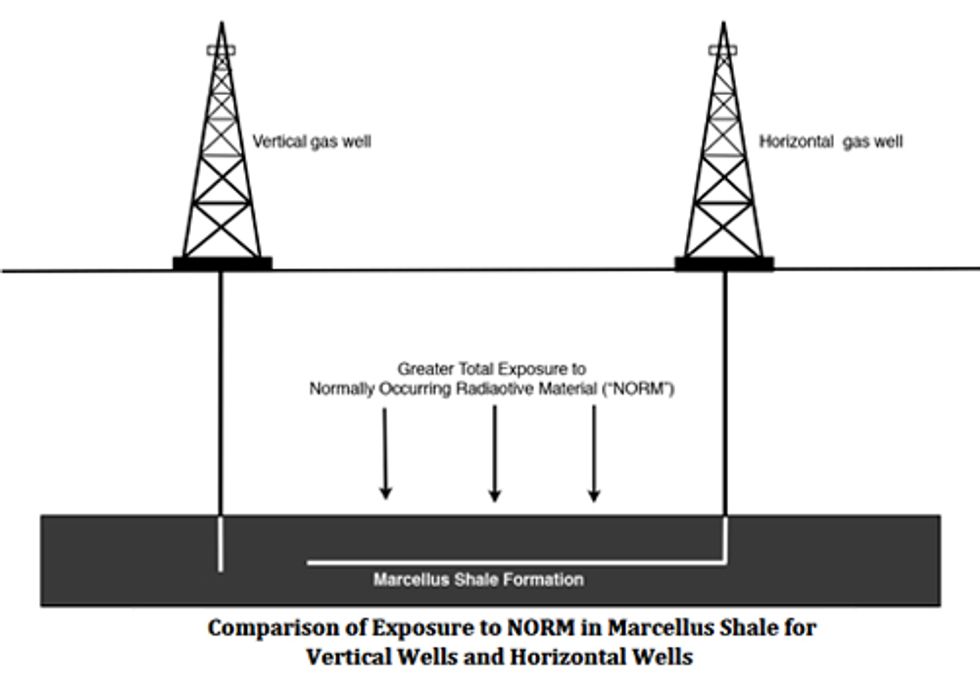 A new report issued by Grassroots Environmental Education, a New York-based non-profit organization and authored by a former staff scientist for the National Council on Radiation Protection says that horizontal hydrofracking in the Marcellus Shale region of New York State is likely to produce significantly higher amounts of radioactive waste than previously believed, putting New Yorkers in danger, and that the New York State Department of Environmental Conservation has not demonstrated the ability to properly analyze the potential impact of radiation exposure or take adequate steps to protect the public.

"Once radioactive material comes up out of the ground along with the gas, the problem is what to do with it," says Doug Wood, associate director of Grassroots Environmental Education, who edited the report. "The radioactivity lasts for thousands of years, and it is virtually impossible to eliminate or mitigate. Sooner or later, it's going to end up in our environment and eventually our food chain. It's a problem with no good solution—and the DEC is unequipped to handle it."

According to the U.S. Environmental Protection Agency (EPA), exposure to radium increases the risk of cancer. Radium also decays into radon, which is the second leading cause of lung cancer.

The report, Consideration of Radiation in Hazardous Waste Produced from Horizontal Hydrofracking, was authored by Ivan White, a career scientist with the congressionally-chartered National Council on Radiation Protection. There he helped develop computer programs for radiation risk assessment and assisted in the formulation of national policies on radiation protection for civilian and military personnel.

"Radioactive materials and chemical wastes do not just go away when they are released into the environment. They remain active and potentially lethal and can show up years later in unexpected places," writes White. "They bio-accumulate in the food chain, eventually reaching humans. Under the proposal for horizontal hydrofracking in New York State, there are insufficient precautions for monitoring potential pathways or to even know what is being released into the environment."

Many scientists, including senior scientists at the U.S. EPA have been similarly critical of the NYS Department of Environmental Conservation's (DEC) seemingly cavalier attitude toward radioactive waste from gas drilling. In its comments on the dSGEIS submitted in January of this year, the EPA Region 2 recommended that the DEC withdraw its conclusion that exposure to radioactive material "[did] not indicate an exposure of concern" because it was based on insufficient data. It went on to suggest that the DEC needed to demonstrate "more vigilance in proper handling and disposal" of radioactive waste.

"None of these disposal methods adequately protect New Yorkers from eventual exposure to this radioactive material," says Wood. "Spread it on the ground and it will become airborne with dust or wash off into surface waters; dilute it before discharge into rivers and it will raise radiation levels in those rivers for everyone downstream; bury it underground and it will eventually find its way into someone's drinking water. No matter how hard you try, you can't put the radioactive genie back in the bottle."

Complicating disposal planning for radioactive waste is the fact that the half-life of Radium 226, one of the radioisotopes commonly found in the wastewater and sludge from fracking in the Marcellus shale, is 1600 years. Thus, in the year 3612, half of its radioactivity will remain.