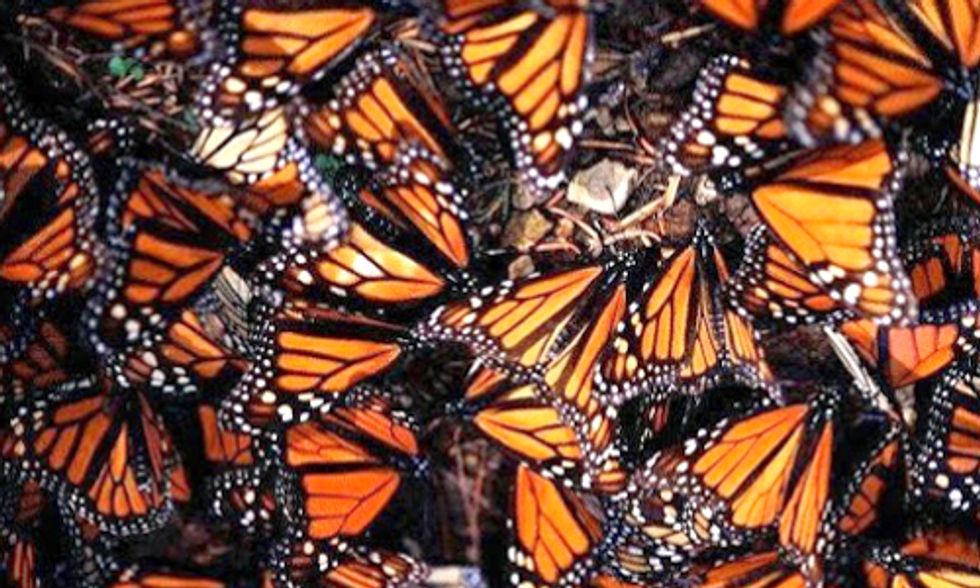 We hate to be the bearer of bad news, again, but the 2013-2014 overwintering population numbers for Monarch butterflies in Mexico were just released yesterday, confirming our bleak predictions from a few months ago: the situation is worsening. Last year’s overwintering numbers were an all-time low, with monarchs occupying 1.19 hectares. The area occupied by monarchs this year is a frightening 0.67 hectares—a 44 percent decline in just the past year.

Total annual area occupied by overwintering butterflies from 1994 through 2013, with linear (upper line) and exponential (lower line) regression analyses. The significant decline charted by Brower and colleagues through 2011-12 continues through 2013-14.

So what does that number actually mean for the population size of monarchs? An average estimate of about 50 million butterflies per hectare would mean there are roughly 33.5 million monarchs—a huge drop from just one year ago. Another way to visualize this downward spiral is to look at the trend of declining overwintering numbers in Mexico throughout the past two decades, as the graph shows above.

These data points and trends, compiled by World Wildlife Fund Mexico, clearly illustrate North American Monarch butterfly populations are in serious trouble, and it’s only going to continue to get worse unless we make some big changes to our agricultural system.

While there are a handful of factors that affect monarch populations from year to year, such as climate extremes and illegal logging in Mexico, the loss of milkweed plants at the expense of recent changes in industrial agriculture now poses the greatest threat to monarchs. The use of the herbicide glyphosate (the active ingredient in Monsanto’s best-selling product, Roundup) on genetically engineered (GE) corn and soybeans has absolutely decimated milkweed plants in North America.

Milkweed used to grow in abundance in Midwestern crop fields of North America, but now that the almost all corn and soybean varieties are engineered to withstand heavy applications of glyphosate, milkweed has little chance of survival in these vital monarch breeding grounds. For example, researchers now estimate that the number of milkweeds in Iowa corn and soybean fields has decreased by 98.7 percent between 1999 and 2012.

Milkweed—the only plant on which monarchs lay their eggs—is being eradicated by the herbicide glyphosate, the active ingredient in Monsanto's Roundup product.

So where do we go from here? Omar Vidal, the director general of WWF Mexico, which reports the monarch overwintering numbers, really hit the nail on the head at this morning’s press conference when he said it’s time for the U.S. to do its part to protect this struggling species. In fact, he exclaimed that “Mexico must ‘energetically demand’ that the U.S. reform its agricultural policy with an eye toward preserving milkweed."

Precisely. More milkweed equals more monarch habitat; and gaining more milkweed will require less of Monsanto’s Roundup sprayed on our fields. These critical plants are the sole breeding grounds for Monarch butterflies and the only source of food for their larvae. We enthusiastically agree with Vidal—it is prime time for the U.S. to take action and protect Monarch butterflies. We can’t sit back and watch their population numbers consistently drop to new all-time lows.

Over the coming months, Center for Food Safety will be working with Members of Congress to introduce legislation to preserve and restore milkweed and protect the iconic Monarch butterflies they nurture, and we’ll also be considering legal actions to ensure our government is doing everything it should be to safeguard Monarchs. Additionally, we are putting direct pressure on President Obama and federal agencies to make the changes needed to protect our Monarchs.

We face an historic choice as Americans: Monsanto or Monarchs. If we keep planting their pesticide-promoting crops at the rate we have been, our Monarchs will vanish. We need to make it clear to federal decision-makers that if we want to save Monarch butterflies in North America, we must prevent their critical habitat from being destroyed by Monsanto’s Roundup Ready GE crops, and the unsustainable, pesticide-intensive industrial agriculture system promoted by such crops. You can help by signing our petition to the EPA, USDA and President Obama to tell them that it’s time to stop approving pesticide-promoting crops.