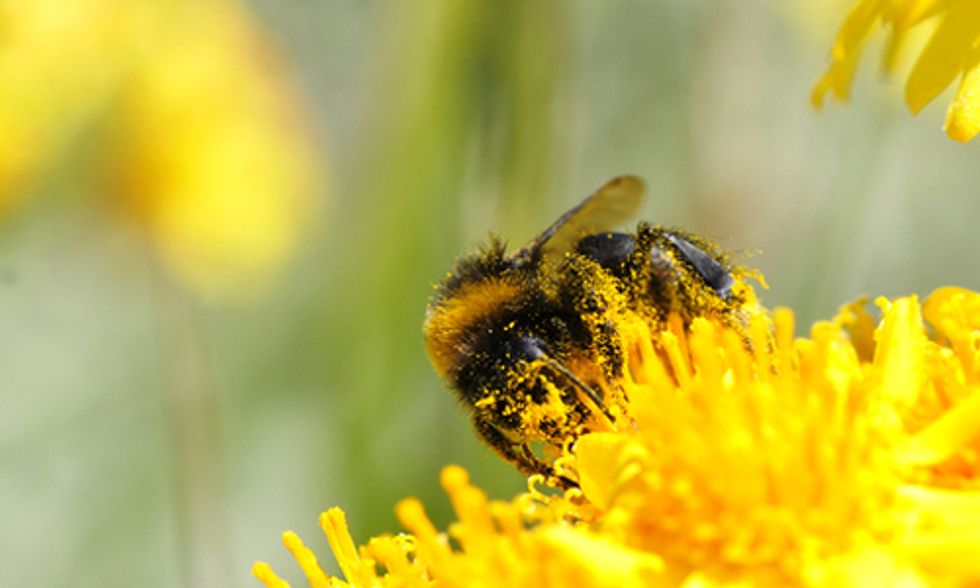 More than two-thirds of the pollen that honeybees collect from European fields is contaminated by a cocktail of up to 17 different toxic pesticides. These are the shocking findings of a new study released yesterday.

Greenpeace activists unfurled a banner in front of Bayer's headquarters yesterday in correlation with the release of the report. Photo credit: Greenpeace

In addition to pesticides-related chemicals, the report also identifies substances used in insecticides, acaricides, fungicides and herbicides, produced by agrochemical companies like Bayer, Syngenta and BASF. To mark the release of the report and protest against the chemical industry's role in bee decline, more than 20 activists unfurled a giant banner outside the headquarters of Bayer, in Germany.

The study, The Bees' Burden: An analysis of pesticide residues in comb pollen (beebread) and trapped pollen from honey bees, is the largest of its kind, comprising more than 100 samples from 12 European countries. In total 53 different chemicals were detected.

The study is a snapshot of the toxicity of Europe’s current agricultural system. It demonstrates the high concentrations and wide range of fungicides found in pollen collected around vineyards in Italy, the widespread use of bee-killing insecticides in pollen from rape fields in Poland, the detection of DDE—a derivative of DDT—a pesticide banned decades ago, and the frequent detection of the insect nerve-poison Thiacloprid, a neonicotinoid, in many samples from Germany.

“This study on contaminated pollen reveals the unbearable burden of bees and other vital pollinators,” said Matthias Wüthrich, a Greenpeace ecological farming campaigner. “Bees are exposed to a cocktail of toxic pesticides. This is yet more proof that there is something fundamentally wrong in the current agricultural model which is based on the intensive use of toxic pesticides, large-scale monocultures and corporate control of farming by a few companies like Bayer, Syngenta & Co. It shows the need for a fundamental shift towards ecological farming.”

The report confirms the findings of a recent study carried out by the European Food Safety Authority (EFSA). In its study, EFSA acknowledges vast knowledge gaps related to the health of bees and pollinators, including on the effects of chemical "cocktails," and calls on the EU and national governments to fill this gap with further scientific investigation.

In light of its findings on pollen contamination and following EFSA’s recommendations, Greenpeace calls on the European Commission and policy-makers across Europe to: