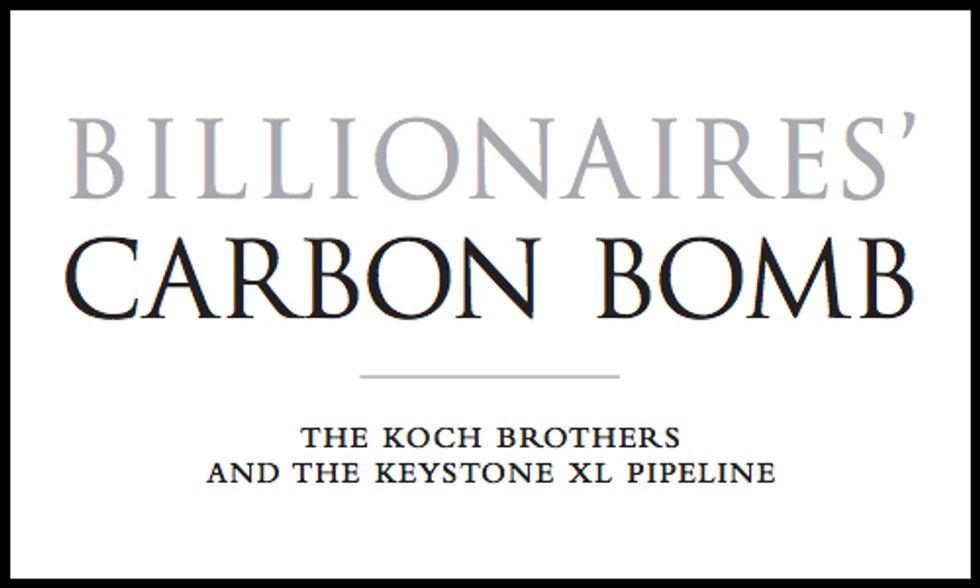 The progressive think tank International Forum on Globalization (IFG) released a report today investigating how Koch Industries and its subsidiaries stand to make as much as $100 billion in profits if the Keystone XL pipeline is built. The report, Billionaires' Carbon Bomb: The Koch Keystone XL Pipeline, finds that the Kochs hold up to 2 million acres in Alberta and have spent upwards of $50 million on Congress and think tanks that heavily push for the pipeline.

A Google map showing the Koch assets in the tar sands region as well as interests along the proposed Keystone XL pipeline. Image credit: International Forum on Globalization

The Kochs have long been one of the largest players in the tar sands region of Alberta, Canada, according to a IFG press release. The report connects the Kochs’ 50 year history and large footprint in the Canadian tar sands to the current debate about the Keystone XL pipeline.

“The Kochs have repeatedly claimed that they have no interest in the Keystone XL pipeline, this report shows that is false,” said Victor Menotti, executive director of IFG.

“We noticed Koch Funded Tea Party members and think tanks pushing for the pipeline. We dug deeper and found $100 billion in profits, $50 million sent to organizations supporting the pipeline, and perhaps 2 million acres of land. That sounds like an interest.”

Other findings in the report include:

"The past two weeks of the government shutdown brought to light the irresponsible influence of Koch-funded groups," said Jane Kleeb, director of Bold Nebraska.

"Rewarding the Koch Brothers with Keystone XL, who at every turn fund campaigns to mislead Americans on everything from climate to gas prices, is like the President advocating for Sen. Cruz to be the Majority Leader. It makes no sense. Farmers and ranchers in Nebraska are depending on President Obama to see our national interest is not served with a pipeline that lines the pockets of climate deniers and foreign oil."