New Report—Fracking Could Cause a Global Water Crisis 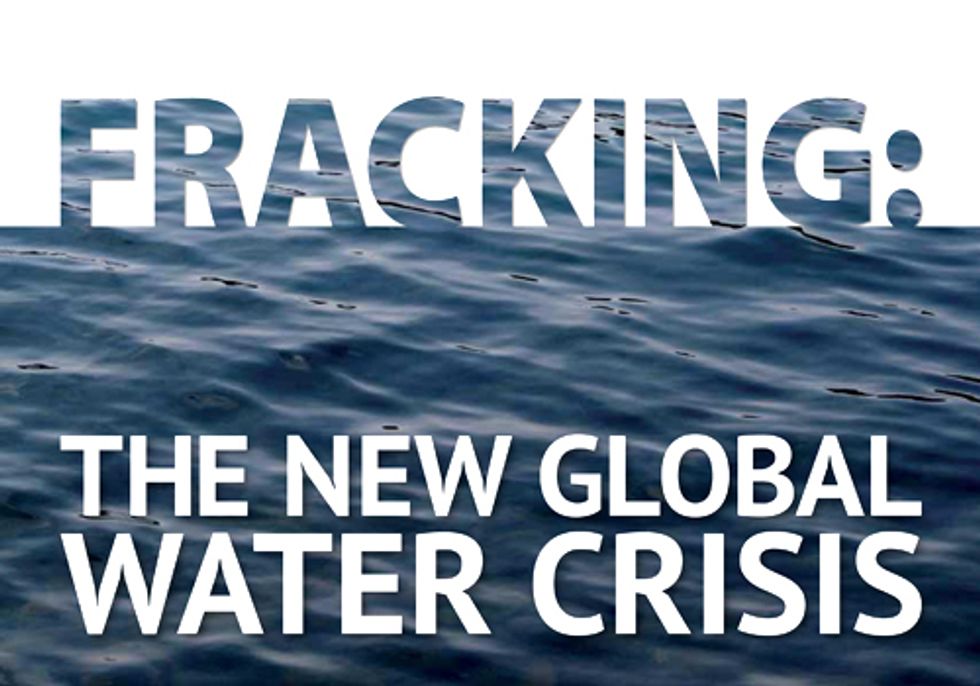 New technology enabling the extraction of large quantities of oil and natural gas from shale and other rock formations could drive the world’s next great global water crisis unless it is banned, according to a new report released March 7 by national consumer group Food & Water Watch. Hydraulic fracturing, or fracking, combined with horizontal drilling, is poised to become a global environmental and public health threat as the oil and gas industry seeks more access to oil and gas trapped in rock formations far beneath the ground.

“Fracking is a dangerous American export that should be viewed critically by countries just starting to engage in the practice,” said Wenonah Hauter, executive director of Food & Water Watch. “Modern drilling and fracking have caused widespread environmental and public health problems, as well as posed serious, long-term risks to vital water resources.”

According to the report, Fracking: The New Global Water Crisis, countries around the world are grappling with how to address the push to drill and frack. In Europe, while France and Bulgaria have banned fracking in the face of strong public opposition, Poland has welcomed the industry. In China and Argentina, shale gas extraction is being developed with government support. In South Africa, pending an environmental review, a subsidiary of Royal Dutch Shell may be granted permission to extract shale gas.

The oil and gas industry touts the economic benefits of fracking, but the report counters that any economic benefit to local communities is short lived and can be outweighed by the risks and costs of the industry. Employment, construction, housing demand and royalty payments may increase significantly during an initial boom, but these effects diminish quickly as well productivities decline and operations move elsewhere, leaving behind a costly legacy of environmental pollution and scarred landscapes.

“While the oil and gas industry is profiting off of this technology, it has been a disaster for Americans exposed to its pollution. They have dealt with everything from mysterious ailments likely caused by hazardous air pollution to well water contamination that has left rural communities unable to use their water for washing, brushing their teeth or cooking—much less drinking,” said Hauter. “Does the rest of the world want to live this nightmare?”

The report also notes that while natural gas has been touted as a low-carbon fuel, recent scientific studies have shown that the growing dependence on shale gas is likely to accelerate global climate change in the coming decades.

“Shale gas drilling’s benefits can be summed up quickly—good for the oil and gas industry, and bad for rural communities,” says Hauter. “Legislators around the world need to learn what’s happened to these communities in the U.S. as a cautionary tale and implement fracking bans in their countries before it’s too late.”

An excerpt from the report follows:

There are many ways that drilling and fracking contaminate public freshwater resources. First, even before fracking fluid chemicals are injected underground, they can be spilled at the sites of wells40 or in traffic accidents41, resulting in local contamination.

The chemicals used to make fracking fluids are far from safe. Scientists have found that 25 percent of fracking chemicals could cause cancer; 37 percent could disrupt the endocrine system; 40 to 50 percent could affect the nervous, immune and cardiovascular systems; and more than 75 percent could impair sensory organs and the respiratory system.42

A second major pathway of contamination stems from the need to dispose of the several million gallons of fracking wastewater that flows to the surface after each well is fracked. This wastewater contains not only the potentially toxic chemicals used in fracking fluid, but also natural contaminants from deep underground, including total dissolved solids (e.g., salts, barium, strontium), organic pollutants (e.g., benzene, toluene) and normally occurring radioactive material (NORM) such as Radium 226.43 A 2011 New York Times investigative report found that nearly three-quarters of the more than 240 Pennsylvania and West Virginia gas wells studied produced wastewater with high levels of radiation, including at least 116 wells with levels that were hundreds of times the U.S. EPA’s drinking water standard, and at least 15 wells with levels thousands of times the standard.44

Surface water pollution from drilling and fracking occurs with leaks, blowouts and other accidents at the sites of a shale well45; spills from traffic accidents while fracking wastewater is being trucked to disposal sites46; or spills from the intentional and illegal dumping of fracking wastewater.47 In 2010, a shale gas well blowout led to a 75-foot tall geyser of gas and drilling fluid that spilled 35,000 gallons on the ground before it was contained.48 In January 2011, approximately 21,000 gallons of fracking wastewater spewed from a Tioga County, Pennsylvania, well when a valve was erroneously left open, releasing hazardous chloride, sodium, barium and strontium, as well as hydrochloric acid used in the fracking fluid.49 Two months after a fire in the company’s fracking liquid storage tanks injured three people, a Chesapeake Energy well spurted thousands of gallons of fracking fluid in Bradford County, Pennsylvania, due to an equipment failure.50 Pennsylvania had cited Chesapeake Energy 284 times for violations and taken 58 enforcement actions since the beginning of 2008.51