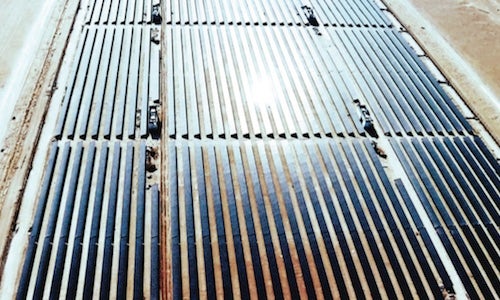 The price of solar power dipped to another record low on May 1 when five international companies bid as little as 2.99 cents per kilowatt-hour (kWh) to develop the latest phase of work at Dubai’s enormous Mohammed bin Rashid Al Maktoum solar park, which will be one of Earth’s largest solar plants when complete.

At less than 3 cents per kWh, that’s 15 percent lower than the previous record-low bid of 3.5 cents per kWh from Italy’s Enel Green Power for a solar project in Mexico, according to Bloomberg New Energy Finance.

The latest bid is also nearly 50 percent cheaper than last year’s winning bid of 5.84 cents per kWh for developing the 200-megawatt second phase of the same solar park, which already broke records then, The National pointed out.

“This not only marks the lowest cost ever for solar power, but also easily beats all available fossil-fuel options in Dubai on cost,” explained Dr. Moritz Borgmann, a partner at of the cleantech advisory group Apricum.

At Dubai's $0.03/kWh, full solar PV cost can compete with just the fuel cost of natural gas, not counting all other costs and climate damage

How does Dubai’s record-low solar tariff compare to the U.S.? As Electrek pointed out:

In the USA, in 2014 and with incentives, utility scale solar projects averaged $.05/kWh. On this bid alone, five companies bid below $.045/kW—without subsidies!

DEWA has not identified the developer behind the bid for the 800-megawatt third phase of the Mohammed bin Rashid Al Maktoum solar plant.

“The next step in the bidding process will review the technical and commercial aspects of the bids to select the best one,” DEWA said.

“Although not unexpected by industry insiders, the results of this tender will send further shock waves through the global power markets,” Borgmann wrote. “Fossil power plants are not only coming under pressure through a renewed drive to reduce global carbon emissions marked by the Paris climate accord, but also by the sheer economic competitiveness of solar (and wind, for that matter) power. Just a few years ago, nobody would have imagined that solar power would be able to beat all fossil fuel sources including coal already in 2016.”

The massive new solar project is part of Dubai’s plans to increase its percentage of renewables in its energy portfolio to 7 percent by 2020 and 15 percent by 2030.

Saeed Al Tayer, DEWA’s managing director and chief executive, told The National that the solar facility has a planned capacity of 5,000 megawatts by 2030, which will provide power for 800,000 homes.

The solar plant will also save approximately 6.5 million tonnes per annum in emissions, Al Tayer said.