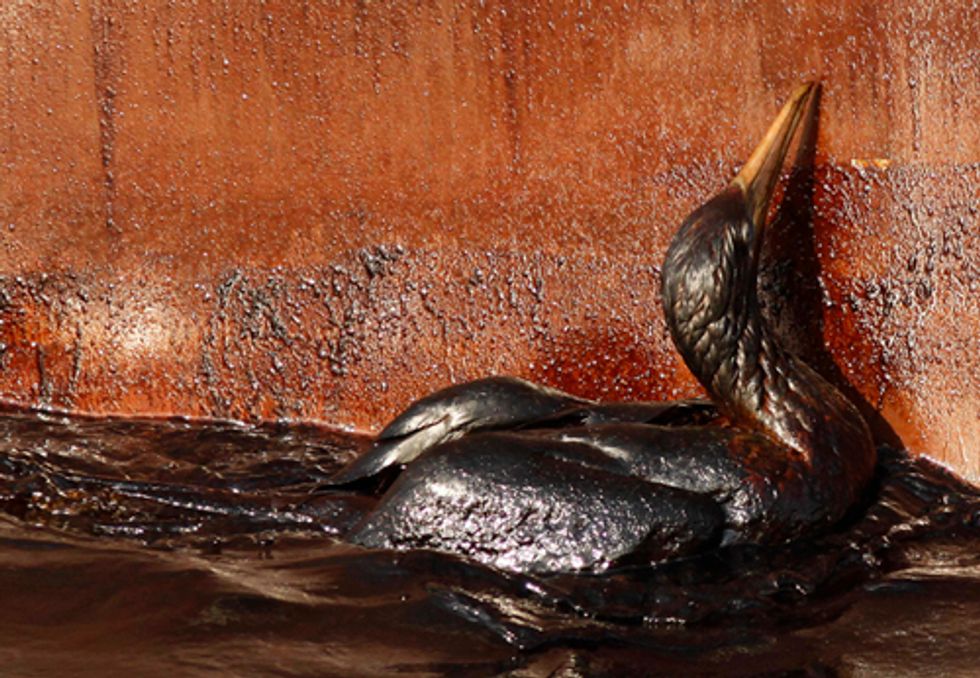 The federal government ignored the impact of British Petroleum's (BP) 200 million gallon oil spill in its assessment of risks and precautions for the Gulf of Mexico before the first new lease sale since the Deepwater Horizon disaster, according to a lawsuit filed Dec. 13 in Washington, D.C. federal court by conservation groups. In deciding to proceed with Lease Sale 218 on Dec. 14, the Bureau of Ocean Energy Management dismissed the lessons learned during the BP Deepwater Horizon disaster from its assessment of oil spill risk for the Gulf of Mexico, the possible size of an oil spill, and resulting damage—all considerations that could help prevent or mitigate a future spill.

The Southern Environmental Law Center filed the complaint Dec. 13 on behalf of Oceana, Defenders of Wildlife, Natural Resources Defense Council, and the Center for Biological Diversity in the U.S. District Court for the District of Columbia challenging the Bureau of Ocean Energy Management's (BOEM) decision to accept bids from oil and gas companies for new deep and shallow water leases in the Gulf of Mexico as part of Lease Sale 218.

“BOEM is continuing the same irresponsible approach that led to the BP Deepwater Horizon disaster and harm still being felt in the Gulf,” said Catherine Wannamaker, senior attorney at the Southern Environmental Law Center, who represents the groups in court. “It’s easier for the government and oil companies to return to business as usual without considering the oil spill’s impacts on the Gulf, but it’s illegal and irresponsible.”

“The administration has buried its head in the sand, ignoring the devastating impacts of the BP spill, and acting as if nothing ever happened. But the spill’s impacts on endangered and commercially important species must be considered,” said Jacqueline Savitz, senior campaign director for Oceana. “We are suing the Department of Interior to force it to protect wildlife and ultimately, the fishing, recreation and tourism industries, rather than just selling out to Big Oil,” she added.

Following last year’s tragic spill, the agency has not advanced in oil spill preparedness or analysis to prevent oil spills in the region, and continues to rely on the same assumptions that failed in the BP Deepwater Horizon disaster and in the three-month-long response attempting to cap the busted well and clean up the spilled oil.

“Failing to fully analyze the effects of the Deepwater Horizon oil disaster and the potential of future spills before moving forward with drilling in the Gulf of Mexico is asking for another drilling catastrophe,” said Sierra Weaver, attorney for Defenders of Wildlife. “If the government isn’t going to act in the interests of the region’s wildlife, natural habitats and coastal communities, we will.”

“The federal government is failing to learn from one of the most environmentally and economically destructive incidents in U.S. history,” said David Pettit, senior attorney with Natural Resources Defense Council (NRDC). “Fresh oil from the Macondo well continues to wash ashore nearly two years later, and the government is being negligent by issuing leases to drill now and drill deeper without ensuring all necessary precautions.”

The Deepwater Horizon oil spill exposed a history of negligence and complicity regarding the former Minerals Management Service rubber-stamp process of approving and profiting from oil drilling lease sales. Following the Deepwater Horizon disaster, that department was reformed into BOEM. The Deepwater Horizon disaster proved the government’s assumption about the risk of a significant oil spill in the Gulf of Mexico were wrong—particularly the maximum size of a potential spill, the time it would take to cap and clean up such a spill, and the possibilities of technology failures like the blowout preventer.

“Hundreds of dead dolphins and sea turtles washed ashore in the wake of the spill last year. The full extent of the toll this has taken on wildlife and people hasn’t even been fully calculated, but the government’s already eager to plow ahead with expanded leasing in the Gulf of Mexico,” said Deirdre McDonnell, a senior attorney with the Center for Biological Diversity. “Sadly, it seems the name of its own oversight agency—from ‘the Minerals Management Service’ to ‘BOEM’—is just about the only thing the Obama government has actually changed in response to the biggest environmental accident in U.S. history.”

BOEM also failed to consider the merits of a delay while more information is gathered. According to a 2011 Department of Interior report, almost 24 million acres leased in the Gulf of Mexico—more than two-thirds of the offshore leases in the Gulf—sit idle, neither producing nor under active exploration and development by oil and gas companies that hold them. Meanwhile, major oil companies reported that strong corporate profits continued in the third quarter of 2011.

During November 2011 alone, the National Response Center received 25 reports of oil spills in the Gulf of Mexico.

Oceana is the largest international advocacy group working solely to protect the world’s oceans. Oceana wins policy victories for the oceans using science-based campaigns. Since 2001, we have protected over 1.2 million square miles of ocean and innumerable sea turtles, sharks, dolphins and other sea creatures. More than 500,000 supporters have already joined Oceana. Global in scope, Oceana has offices in North, South and Central America and Europe. To learn more, click here.

The Center for Biological Diversity is a national, nonprofit conservation organization with more than 320,000 members and online activists dedicated to the protection of endangered species and wild places. For more information, click here.

NRDC is an international nonprofit environmental organization with more than 1.3 million members and online activists. Since 1970, our lawyers, scientists, and other environmental specialists have worked to protect the world's natural resources, public health, and the environment. NRDC has offices in New York City, Washington, D.C., Los Angeles, San Francisco, Chicago, Livingston, Montana, and Beijing. To visit us, click here.

The Southern Environmental Law Center is the only regional nonprofit using the power of the law to protect the health and environment of the Southeast (Virginia, Tennessee, North and South Carolina, Georgia, and Alabama). Founded in 1986, SELC's team of more than 40 legal experts represent over 100 partner groups on issues of climate change and energy, air and water quality, forests, the coast and wetlands, transportation, and land use. To visit our website, click here.