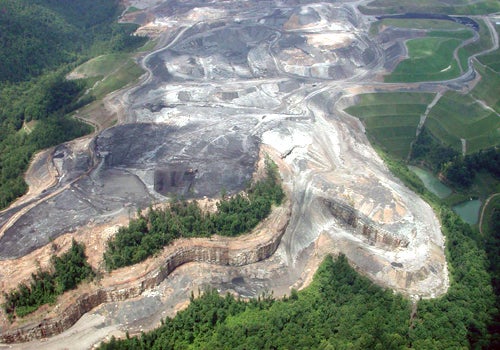 Besieged residents living amid the fallout of the mountaintop removal crisis in the central Appalachian coalfields are descending on Washington, DC today, as part of a new emergency health campaign calling for an immediate moratorium on “the toxic coal acquisition process that has been shown to be associated with heart-breaking birth defects, cardiac problems, lung problems and systemic failures in other human organs.”

Carting along reams of shocking peer-reviewed scientific studies that have been ignored by their own elected officials, the Appalachian Community Health Emergency (ACHE) marks the launch of a weekly frontline citizens initiative in Washington, DC with national human rights and health organizations to prod the Obama administration to enact a moratorium on mountaintop removal operations until a federal study and long-awaited Congressional hearings are carried out on the spiraling mountaintop removal mining health care crisis.

One of the most unnecessary environmental and human rights violations in the nation, mountaintop removal mining provides less than 5-7 percent of national coal production, while detonating millions of pounds of daily explosives that have ruined historic communities and watersheds in West Virginia, Kentucky, southwest Virginia and eastern Tennessee.

On the heels of a major new study by the National Committee for Responsive Philanthropy on the “stalled out” environmental movement, which urged major funders and foundations to support similar community-based groups most impacted by environmental injustice, the ACHE campaign is also a breakthrough effort of frontline coalfield groups to “kick start” environmental and civil rights groups and ramp up the movement to abolish devastating mountaintop removal mining operations.

“My generation deserves a healthy life,” said Ferg Kincaid, a 16-year-old from Fayette County, West Virginia who was joined by former coal mining families and afflicted community members with the Christians for the Mountains, Coal River Mountain Watch, and Mountain Health & Heritage Association, among other groups. “As long as Mountaintop Removal is going on, we don’t even have a chance.”

The Appalachian Community Health Emergency is a timely new national initiative, as other state and local campaigns to outlaw mountaintop removal move through committees in state legislatures in Tennessee and Kentucky, and West Virginia activists block mining on historic Blair Mountain, among other areas.

In a press release, the ACHE campaign declared “that all Americans should be able to live in healthy communities”:

The mission of the Appalachian Community Health Emergency (A.C.H.E.) campaign is nothing short of the abolition of Mountaintop Removal, beginning with an immediate moratorium on the toxic coal acquisition process that has been shown to be associated with heart-breaking birth defects, cardiac problems, lung problems and systemic failures in other human organs.

We will reach our vision by employing the findings of scientific, peer‐reviewed research to educate government, public and private sectors and engage in a dialogue with agencies such as, but not limited to, the Environmental Protection Agency, the United States Department of Justice, the United States Department of Health and Human Services, the American Cancer Society, the America Lung Association, and the American Centers for Disease Control and Prevention.

The key health effects that we will be sharing information about are as follows:

1. Babies born to mothers who smoke during pregnancy HAVE AN 18% HIGHER RISK OF BIRTH DEFECTS; however, babies born to mothers who live in areas with mountain top removal mining HAVE A 26 PERCENT HIGHER RATE OF BIRTH DEFECTS. Additionally, it was found that this risk is 42 PERCENT HIGHER OVER THE COURSE OF THE STUDY PERIOD FROM YEARS 2000‐2003 and 181 PERCENT HIGHER DURING MORE RECENT YEARS, SPECIFICALLY FOR A HEART OR LUNG DEFECT.* (Ahern, MM, et al, Environ. Res., (2011), DOI: 10.1016/j.envres.2011.05.19)

3. People who live in areas with mountaintop removal mining HAVE HIGHER DEATH RATES compared to people who do not live near MTR mining.* (Hendryx, Journal of Health Disparities Research and Practice Volume 4, Number 3, Spring 2011, pp. 44‐53)

4. People who live in areas where there is mountaintop removal mining HAVE HIGHER RATES OF DEATH FROM CARDIOVASCULAR DISEASE, (HEART DISEASE).* (Esch & Hendryx; The Journal of Rural Health; 00; 2011; 1‐8)

“Appalachian people must have relief,” said Naoma resident Bo Webb. “The evidence is clear that mountaintop removal is more dangerous for an expectant mother even than smoking. No government concerned with the health of its citizens can let this go on in the face of such disturbing science.”

More information on the new campaign is at the Appalachian Community Health Emergency website.