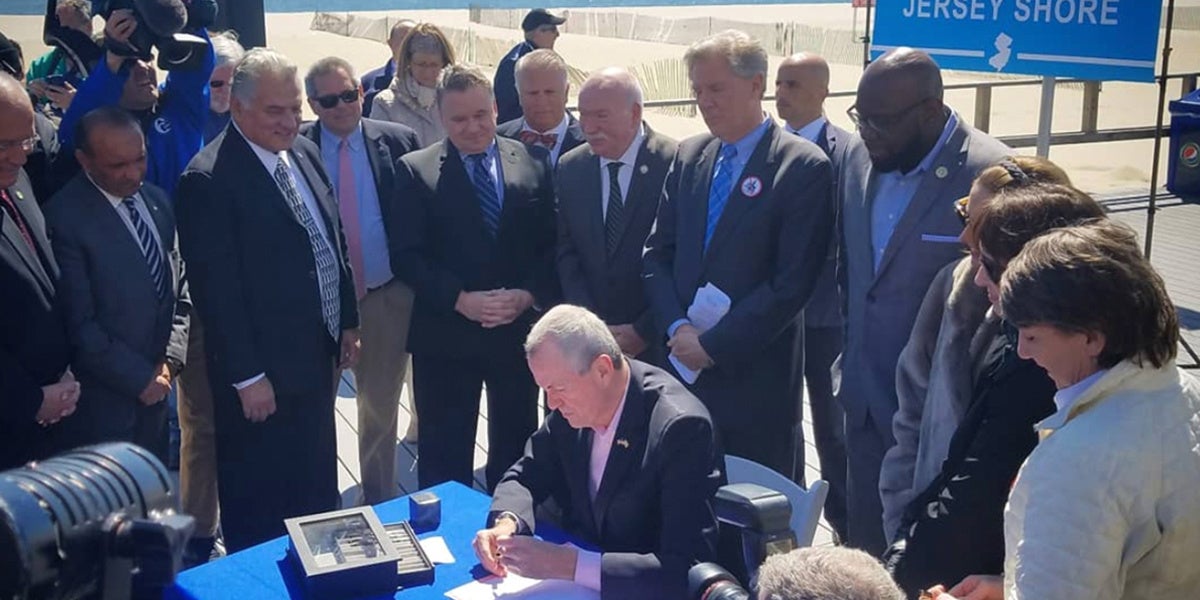 The Democratic governor noted that signing occurred on the anniversary of the 2010
Deepwater Horizon oil spill in the Gulf of Mexico.

The state’s 130-mile coastline is home to beaches, fisheries and marine life. It also supports a $44 billion tourism industry that attracts millions of visitors each year.

Even though New Jersey has no control over drilling in federal waters, they do have jurisdiction over three nautical miles extending off the coast. By banning drilling in those waters, the state has effectively blocked the construction of any infrastructure such as pipelines or docks that could transfer the oil.

While companies can get offshore oil without this equipment—they can instead use floating oil rigs and transfer the oil onto ships—that method is much more difficult and expensive.

“I don’t see how they can get around it,” Rep. Frank Pallone Jr., a Democrat representing a Jersey shore district, told the
Associated Press.

According to the governor’s office, the bill also prohibits the Department of Environmental Protection (DEP) from issuing any permits and approvals for the development of any facility or infrastructure related to offshore drilling within or outside of New Jersey waters. Additionally, the DEP must review any proposed oil or natural gas development in the Atlantic region of the U.S. exclusive economic zone to determine if the proposal can reasonably be expected to affect New Jersey waters.

The legislation received a 37-0 vote in the Senate and a 72-1 vote in the Assembly. Only Parker Space (R) voted against its passage.

“New Jersey will not stand by silently and allow Donald Trump and Interior Secretary
Ryan Zinke to open the ocean floor off our coast to oil and gas exploration,” Murphy tweeted.

“No way, no how, never to offshore drilling off our beautiful shore,” he said in a video from the boardwalk in Point Pleasant Beach.

Today, I signed into law a bill to protect the Jersey shore from the potential devastation of offshore drilling.

New Jersey will not stand by silently and allow @realDonaldTrump and @SecretaryZinke to open the ocean floor off our coast to oil and gas exploration. pic.twitter.com/nLrv5PzoVb

The Associated Press noted that other states including California, New York, South Carolina and Rhode Island have introduced bills similar to New Jersey’s. Washington state is also considering one. Maryland has introduced a bill imposing liability on anyone who causes a spill.

President Trump’s proposal to massively expand offshore oil and natural gas drilling off the Pacific and Atlantic coasts has drawn
bipartisan opposition over fears that such operations at sea could expose coastal areas to the risks of blowouts, explosions, catastrophic spills and seismic blasting.

Former New Jersey Gov. Chris Christie, a Republican, previously said that the state “strongly opposes any waters off our coastline being considered for inclusion in this leasing program.”

New Jersey has become increasingly focused on low-carbon energy.
Earlier this month, the Garden State passed bills that require the state to generate 50 percent of their electricity from renewable sources by 2030, and subsidize existing nuclear power plants.