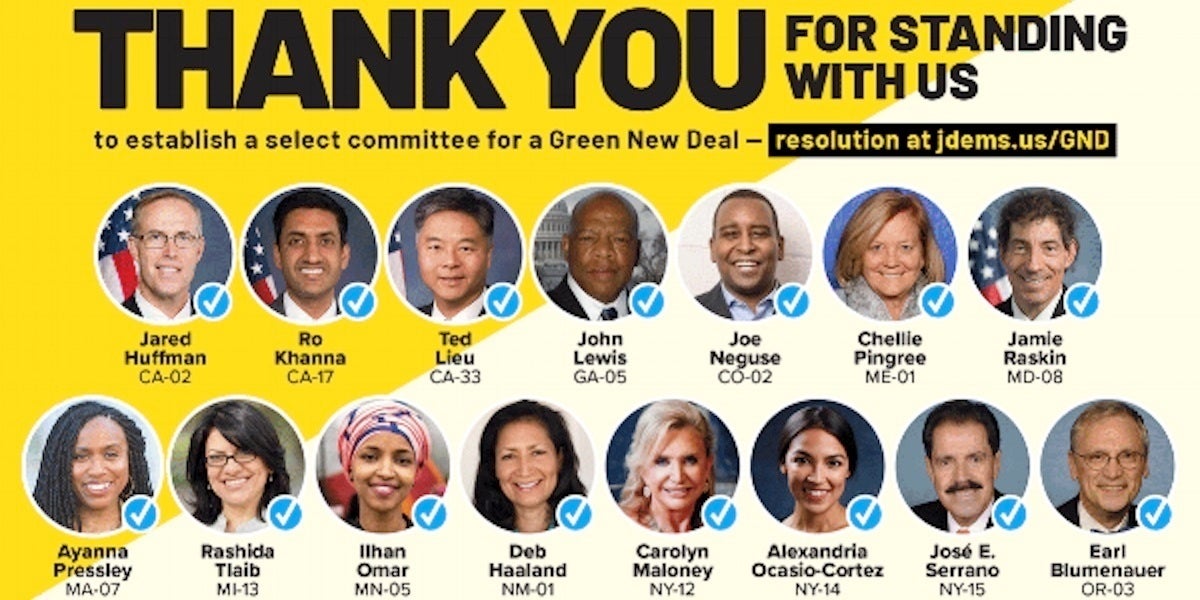 Fifteen members of Congress have now backed Ocasio-Cortez’s proposal to establish a “select committee” in the House of Representatives to develop a plan to—basically—reduce greenhouse gas emissions and to transition the U.S. to 100 percent renewable energy sources within 10 years of passing the Green New Deal legislation.

Supporters in the House include John Lewis, the civil rights leader and Democratic congressman from Georgia, and trailblazers Rashida Tlaib and Ilhan Omar, the first two Muslim women ever elected to Congress.

The science is clear—we need urgent action on climate change now. Actually, we needed it 15 years ago. Now we’re running out of time.

Time to get past the hurdles, and realize that the #GreenNewDeal is critical to our future on this planet.https://t.co/rvcQwOp7Kb

“We don’t need another report to tell us climate change is a threat to our health, environment and economy,” she said in a statement on her website. “We must take urgent action to end our nation’s reliance on fossil fuels and stop the damage greenhouse gases have done to our way of life.”

Pingree, an organic farmer and member of the House Appropriations Subcommittee on Interior and the Environment, said the effects of climate change have greatly impacted her state.

“Look no further than Maine’s lobster industry to see the looming economic crisis facing our state due to rapidly warming waters,” she said. “Meanwhile rates of asthma and tick-borne illness in Maine have dramatically spiked because of fossil fuel emissions and rising temperatures. I see the crisis of climate change every day in my state and believe a new committee dedicated exclusively to this crisis can support the long-standing work of other House committees and help to fast-track solutions.”

Here are the 15 House Democrats supporting the measure:

The proposal also has the support of nearly 100 environmental, economic and social justice organizations, according to the Sunrise Movement.

To build momentum, the youth climate group is organizing another mass action at the Capitol on Dec. 10, right before Congress breaks for the holidays, “to make sure Ocasio’s Select Committee on a Green New Deal makes it on the agenda for 2019,” Sunrise Movement founder Varshini Prakash said in an emailed press release.

The group launched the effort only yesterday and 230 people have already signed up to participate. (You can also join the action in DC, or if you’re on the West Coast, you can sign up for the action in Nancy Pelosi’s office in San Francisco.)

We have until Dec 13 to set the agenda for 2019. A #GreenNewDeal MUST be a priority.

Last week, the National Climate Assessment report—compiled by 13 federal agencies and more than 300 scientists—warned that climate change could kill thousands of Americans each year and slash the GDP by more than 10 percent by 2100.

President Donald Trump, who is fixated on fossil fuels, dismissed his own government’s report by saying “I don’t believe it.”

“People are going to die if we don’t start addressing climate change ASAP. It’s not enough to think it’s ‘important.’ We must make it urgent,” Ocasio-Cortez tweeted after the report’s release. “That’s why we need a Select Committee on a Green New Deal, & why fossil fuel-funded officials shouldn’t be writing climate change policy.”

People are going to die if we don’t start addressing climate change ASAP.

It’s not enough to think it’s “important.” We must make it urgent.

That’s why we need a Select Committee on a Green New Deal, & why fossil fuel-funded officials shouldn’t be writing climate change policy. https://t.co/bn6NloGlaY