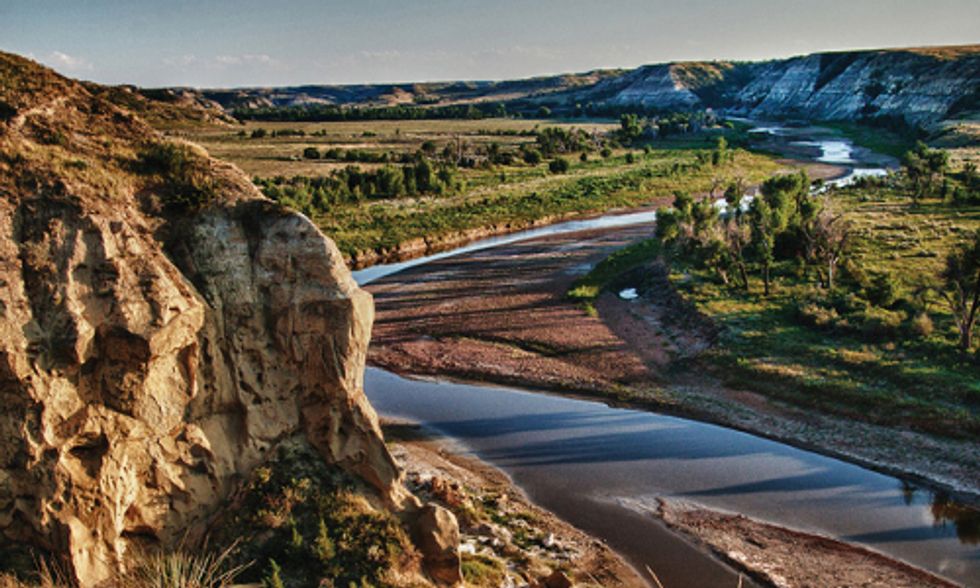 Earlier this week, Secretary of the Interior Sally Jewell said that the new regulations for fracking on federal lands from the Department of the Interior's Bureau of Land Management (BLM) would be released "within the next few days," following a four-year process that included receiving more than 1.5 million public comments. Today she unveiled those new rules, which take effect in 90 days. The BLM claimed they would "support safe and responsible hydraulic fracturing on public and American Indian lands."

“Current federal well-drilling regulations are more than 30 years old and they simply have not kept pace with the technical complexities of today’s hydraulic fracturing operations,” said Jewell. “This updated and strengthened rule provides a framework of safeguards and disclosure protocols that will allow for the continued responsible development of our federal oil and gas resources. As we continue to offer millions of acres of public lands for conventional and renewable energy production, it is absolutely critical the public have confidence that transparent and effective safety and environmental protections are in place.”

Drilling has been occurring on federal lands for years with more than 100,000 wells in existence. However, following the fracking boom of the last two decades, more than 90 percent of new drilling operations involve that process, evading the regulations of 30 years ago.

Rather than the ban on new drilling that many environmental and citizen groups sought, the rules focus on safety issues like well construction, and chemical management and disclosure.

• Ensuring the protection of groundwater supplies by requiring a validation of well integrity and strong cement barriers between the wellbore and water zones through which the wellbore passes;

• Requiring companies to publicly disclose chemicals used in fracking to the Bureau of Land Management through the website FracFocus within 30 days of completing operations;

• Higher standards for interim storage of recovered waste fluids from fracking to mitigate risks to air, water and wildlife; and

• Measures to lower the risk of cross-well contamination with chemicals and fluids used in the fracturing operation, by requiring companies to submit more detailed information on the geology, depth and location of preexisting wells to give the BLM the chance to better evaluate and manage site characteristics.

“This rule will protect public health and the environment during and after hydraulic fracturing operations at a modest cost while both respecting the work previously done by the industry, the states and the tribes and promoting the adoption of more protective standards across the country,” said Assistant Secretary for Land and Minerals Management Janice Schneider. “We know how important it is to get this right.”

“This rule was informed and shaped by the technical expertise, interests and concerns of all of our partners, and builds on the work of states and tribes to ensure best practices on a nationwide basis,” added BLM director Neil Kornze. “The new regulations are essential to our mutual efforts to protect the environment and the communities that depend on vital water, land and wildlife resources. This rule is good government."

That opinion was far from universal. Some environmental groups hailed it as a good start.

"Our public lands and the people who live near them deserve the highest level of protection from the oil and gas industry,” said Earthjustice senior legislative representative Jessica Ennis. “Today's Interior rules take an important step forward by moving toward the use of tanks to store toxic produced water and removing the flawed 'type well' concept and replacing it with a requirement for integrity tests on all wells, but there is more to be done. The U.S. must ramp up its expansion of clean energy and keep oil and gas in the ground."

"The BLM fracking rule is a significant improvement over business as usual," said Earthworks policy director Lauren Pagel. "For the first time, the BLM will prohibit fracking waste pits on public lands, and require oil and gas companies to test the integrity of every well to help prevent pollution. But in other important ways this rule falls short of what is needed to protect communities and the environment and continues the Obama administration’s pattern of prioritizing fossil fuel extraction over clean energy development and people’s health."

Others were more emphatic about how much the new rules fall short.

“Our precious public lands have and are continuing to be sacrificed by the Obama administration, only for the short-term profit of the oil and gas industry,” said Wenonah Hauter, executive director of Food & Water Watch. "Our work will continue to truly protect the millions of acres of federal lands that will remain in harm's way until fracking is halted entirely. Americans believe that preserving the environmental integrity of these areas for generations to come is a critically important policy goal, especially in light of new evidence about fracking-related harm to natural resources."

But even these modest, common-sense rules were too much for some industry players. The American Petroleum Institute (API) called them "duplicative" and a hindrance to job growth. "Despite the renaissance on state and private lands, energy production on federal lands has fallen, and this rule is just one more barrier to growth,” said API director of upstream and industry operations Erik Milito. “Under the strong environmental stewardship of state regulators, hydraulic fracturing and horizontal drilling have opened up a new era of energy security, job growth and economic strength."

Mark Ruffalo, an advisory board member for Americans Against Fracking, couldn't disagree more. “Our U.S. national parks and public lands are some of our most treasured places and should be protected from fracking. Yet instead of following the lead of New York in banning fracking, the Obama Administration has devised fracking regulations that are nothing more then a giveaway to the oil and gas industry. These regulations take from us our heritage and hands it to an industry that doesn't need a hand out. Industrialization and parks don't belong together.”

Charlie Cray, research specialist at Greenpeace, agrees, “The President should direct BLM to stop issuing any new leases immediately until there is evidence that we won't cross the climate tipping point, or the very least until their new methane pollution regulations are finalized and binding. All of the above should mean no more from below.”