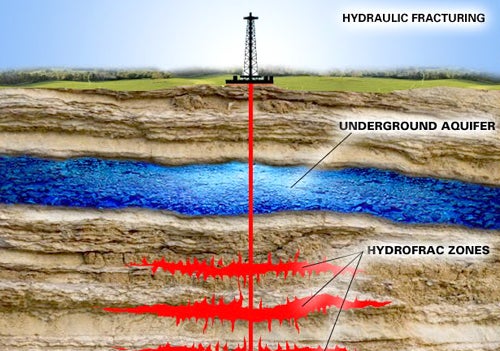 Reposted with permission of NRDC—Switchboard

It looks like every day more and more cracks are appearing in the stock oil and gas industry argument about fracking-related water contamination. For those who haven’t heard it before, the standard line goes something like this: fracking couldn’t possibly contaminate underground drinking water because, between the productive shale layer and groundwater, there are thousands of feet of solid, impermeable rock. Even where contamination does occur, the claim continues, this is not due to fracking, but poor casing and cementing jobs, which are rare in practice and not worth worrying too much about.

The argument may sound nice, but there is an increasing body of evidence (and please forgive the pun here) that it’s anything but rock solid. I’ll highlight three recent findings:

New Findings on Casing and Cementing Failures—Industry-sponsored reports compiled by the Gasland folks (and explained in Josh Fox’s new short video, The Sky is Pink) demonstrate that not only are casing and cementing problems possible, they are an expected part of the drilling process. In certain areas, anywhere from 18 to 45 percent of wells experience such so-called “well integrity issues.” (For review, casings are the giant metal pipes that drillers place in the drilled wells to prevent gas and toxic frack fluid from bleeding out into underground sources of drinking water. Because there is usually space between the outside of the casing and the drilled hole or between the outside of one casing and the next, that space is filled with cement to seal potential pathways for leaks).

According to the reports, water can become contaminated when the casing itself corrodes or otherwise leaks (for example, see here), or when gaps in the cement outside the casing allow methane and other contaminants to travel up the well from shallow pockets of trapped gas, which may explain the results of a Duke University study last year linking methane contamination to gas drilling. Not all contamination is expected to happen immediately. Because drillers simply leave frack chemicals in the ground indefinitely after operations cease, casing and cementing problems may contaminate ground water anytime between now and the end of time.

New Computer Modeling Predicts Groundwater Contamination from Marcellus Drilling Within Years—Even where cementing and casing work perfectly, fracking fluids could still migrate up from the shale formations themselves into groundwater. A recent peer reviewed study by hydrogeologist Tom Myers, published in last April’s edition of the journal Ground Water, predicted, using computer modeling, that natural faults and fractures in the Marcellus, exacerbated by fracking, may lead to water contamination within ten years or less. Although natural migration without fracking would occur at a much slower rate, migration of waste fluid would be likely sped up by the pressures exerted from fracking.

(For other evidence of fluid migration from underground waste disposal wells, read Abraham Lustgarten’s recent article on the problems with underground injection control (UIC) wells. Frack wells are structurally very similar to UIC wells, except that they are exempted from federal standards under the Safe Drinking Water Act).

New Evidence Confirming Possible Contaminant Pathways in Pennsylvania—A new study from Duke University has found brine (i.e. salt water), with the same composition of deep underground brines associated with the Marcellus formation, in shallow underground drinking water in northeastern Pa. Although the presence of brines was not correlated with gas drilling, the fact that they are in drinking water at all shows that there are more pathways between the Marcellus and shallow underground water than previously thought. The pathways, whether from natural fractures or old abandoned wells (like the 40,000 wells drilled in New York for which no records exist), would likely also carry toxic frack water pumped into the Marcellus at high pressure by fracking activities, meaning that areas with these pathways “could be at greater risk of contamination from shale gas development.”

All of these new findings emphasize two important points:

1. That the standard industry contamination argument likely holds about as much water as a defective casing, and