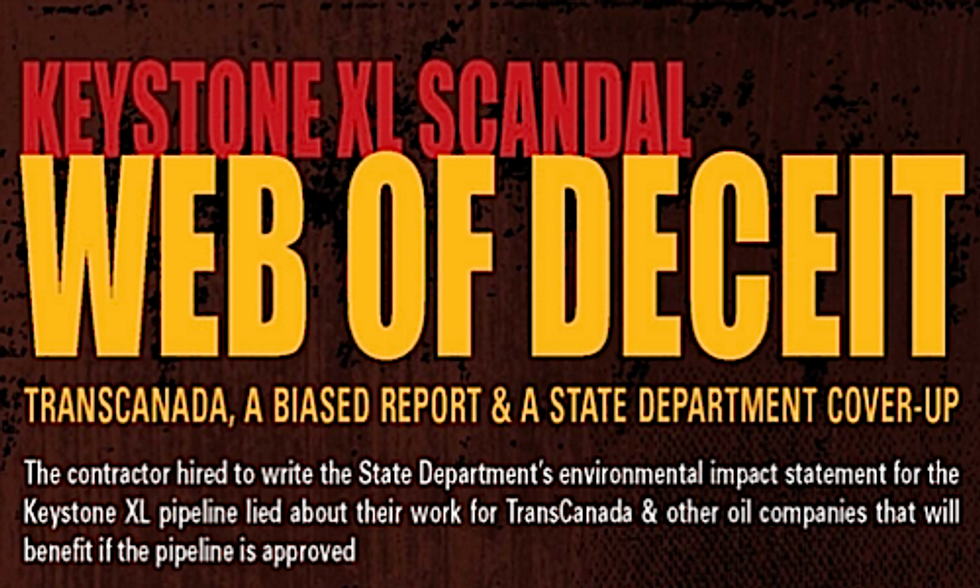 Today Sierra Club and Friends of the Earth submitted evidence to the State Department’s Office of the Inspector General to support the ongoing inquiry into conflicts of interest and mismanagement in the environmental review of the proposed Keystone XL pipeline. The groups request that the Inspector General takes steps to ensure that the tainted Final Environmental Impact Statement, released on Jan. 31, is excluded from the agency’s National Interest Determination.

Image courtesy of Friends of the Earth/ 350.org infographic

“The State Department hired an oil industry consultant to write the environmental review of Keystone XL without taking steps to guard against industry bias,” said Doug Hayes, Sierra Club staff attorney. “So it’s no surprise that the report attempts to minimize the pipeline’s massive carbon pollution and threats to human health and water quality. This flawed report should have no place in the decision making on this pipeline.”

In Aug. 2013, the State Department confirmed that the Office of Inspector General (OIG) had opened an inquiry into the agency’s hiring of the consultant Environmental Resources Management (ERM) to prepare the environmental review of the project. Evidence shows that ERM made false and misleading statements on its application for the contract.

“By hiring ERM, the State Department ignored its own guidelines and invited the fox into the hen house,” said Ross Hammond, Friends of the Earth senior campaigner. “ERM has an obvious self interest in making sure Keystone XL is built."

"The process that allowed them to get this contract has been corrupt from day one and the American people deserve better from their government," Hammond continued. "It’s up to the Secretary Kerry and the Inspector General to restore some integrity and accountability into the review process, not preside over a whitewash.”

On its application, ERM was asked to disclose relationships with entities that might benefit in any way from the approval of the pipeline proposal. ERM answered that there were none. In truth, ERM, which was recommended to the agency by TransCanada, performed services on the Alaska Pipeline Project, a joint project between Exxon and TransCanada. ERM also failed to disclose that at least 11 of its oil industry clients—including Chevron, Exxon, Saudi Aramco, Shell and Total—stand to profit if President Obama approves Keystone XL.

Rather than conduct any independent conflict screening, the State Department simply accepted ERM’s disclosure at face value. The groups contend that this a violation of the State Department’s own protocol and the OIG’s recommendations from a similar 2012 investigation into the contractor in the first Keystone XL review.

The groups conclude that potential bias introduced by the hiring of an oil industry-linked consultant invalidates the FEIS, which has been criticized for downplaying carbon pollution estimates that will result directly from the pipeline, threats to human health and water supplies, and other technical faults.

On Tuesday, Feb. 4, Sierra Club, Friends of the Earth, and Oil Change International filed a Freedom of Information Act Request to the State Department to unearth insider communications with the Canadian government and the oil industry in the weeks leading up to the release of its FEIS. And on Wed. Feb. 5, Sierra Club filed a lawsuit against the Army Corps of Engineers for the agency’s failure to disclose documents related to a wetlands permit needed for the pipeline. The Inspector General invited the groups to contribute evidence in a Nov. 21, 2013, letter.

Today the Sierra Club and Friends of the Earth also published State Department documents they have received so far under the Freedom of Information Act regarding the hiring of ERM to prepare the DSEIS for Keystone XL.