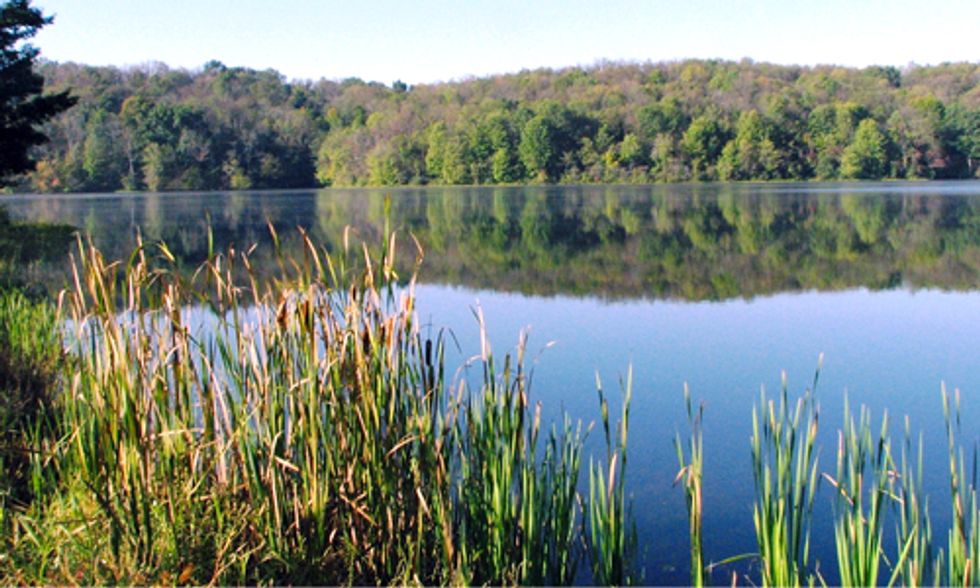 As reported Sunday, new evidence was released today showing Ohio Gov. Kasich's involvement in the communications plan that detailed how the Ohio Department of Natural Resources (ODNR) would “marginalize” opponents of fracking by teaming up with “allied” corporations—including Halliburton, business groups and media outlets—to promote this controversial drilling technique in state parks.

Barkcamp State Park in Belmont County Ohio is one of the Ohio State Parks that the Ohio Department of Natural Resources will exercise state-owned drilling rights on.
Wayne Struble, Gov. Kasich’s director of policy, sent out an invitation on Aug. 20, 2012 to eight of Kasich’s most senior staffers with the subject line: "State-Land Leasing—Strategy and Communications." The subject line is nearly identical to the title of the original memo, Oil & Gas State Lands Leasing: Draft Outline for Communication Plan (8/20/12), created by the ODNR. The only other invited guests were top officials from the ODNR.

“It is simply astonishing that the agency tasked with protecting the environment would see Halliburton as a friend and the Sierra Club as an enemy,” said Deb Nardone, director of the Sierra Club Beyond Natural Gas Campaign. “It’s shocking to see an orchestrated PR hit job in black and white.”

The communications plan refers to stakeholders and key influencers, and refers to adversarial opinion leaders as “‘eco-left’ pressure groups” and goes on to say, “opponents will attempt to create public panic about perceived health risks” and “opponents’ proxies in the media will slant news coverage against us.”

One of the communication objectives in the document states, “Marginalize the effectiveness of communications by adversaries about the initiative.”

The document lists the following as opposition groups and forums:

The document lists the following as allied groups and forums:

"Our state government should not be frittering valuable time and taxpayer money on a PR campaign designed to 'neutralize' legitimate concerns about impacts to public lands and public health and safety from fracking in our state parks and forests," said Nathan Johnson, staff attorney for the Ohio Environmental Council, one of the groups listed in the document.

"The ODNR should be an impartial watchdog, not an industry cheerleader. It's shocking to learn that ODNR laid plans to actively enlist the help of extractive industries to 'marginalize' respected voices for the preservation of our natural heritage.

"The public would be better served if ODNR focused its public relations efforts, instead, on more constructive efforts. They could start by helping the public understand the basic link between the rate of taxation on oil and gas production and funding for more adequate state oversight and enforcement of oil and gas regulations.

"It is interesting to note that the communication plan listed 'disseminate videos about inspections' to help garner favor for public lands drilling. This is hardly a selling-point, however. An analysis of ODNR records reveal that only 1 in 10 active oil and gas wells in Ohio were inspected by ODNR officials in 2010," Johnson concluded.

The ODNR goes as far as saying in the PR document that “this initiative could blur public perception of ODNR’s regulatory role in oil and gas,” and will require “precise messaging and coordination” to eliminate confusion.

“There are valid concerns about fracking, which the plan seems to disregard," said Katherine McFate, president and CEO of the Center for Effective Government, which operates OMB Watch, one of the groups targeted in the plan.

"A recent Associated Press investigation found documented cases of water contamination from fracking in Ohio, and other studies have shown a link between earthquakes and the drilling practice, including one in Youngstown in late 2011. The Ohio DNR should be spending its time and resources wisely, protecting citizens from real harm rather than denying known risks."

A second press event will take place at the Ohio Statehouse tomorrow where Representatives Hagan and Antonio will discuss how the Kasich administration’s cozy relationship with the oil and gas industry is putting corporate interests over the public concerns of safety and job opportunities with regard to fracking in state parks.

“As a state legislator, it is my duty to advocate for the safety and health of our constituents and to respond to their concerns by raising questions and demanding answers,” Rep. Hagan said.

“The oil and gas industry would love nothing more than to sweep those concerns under the rug, and it appears that they have enthusiastic partners in Governor Kasich and the ODNR.”