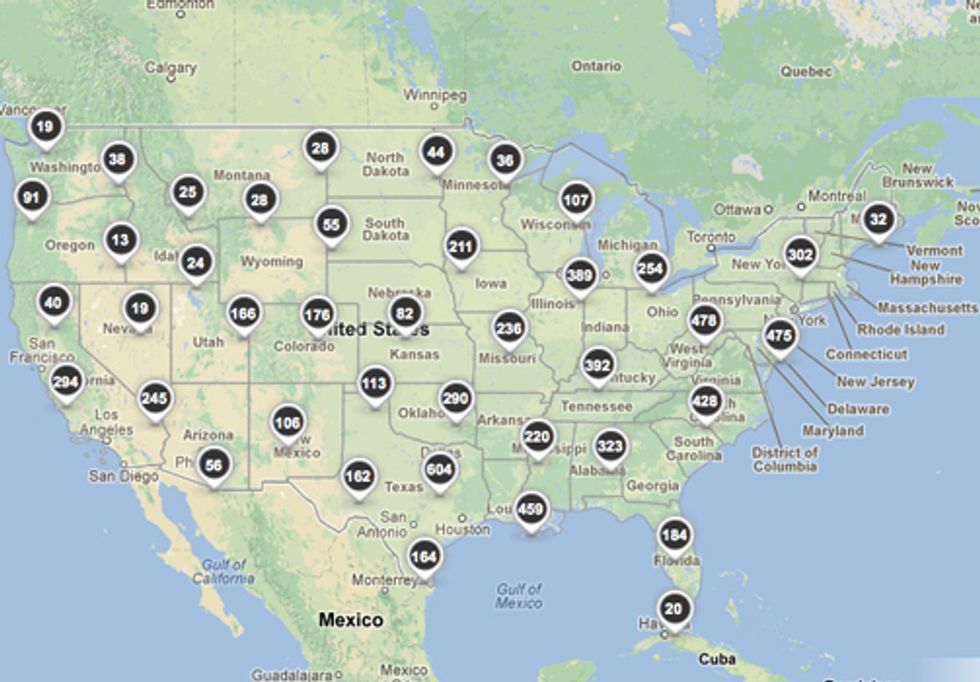 You can check out which of the nation’s 1,594 power plants is in your backyard, and how much carbon pollution it puts out, using EPA’s handy map-based emission data website, which includes data from about 8,000 large facilities in nine industrial sectors.

The U.S. Environmental Protection Agency (EPA) yesterday released plant-by-plant data on 2011 emissions of carbon dioxide and other heat-trapping air pollutants. The data show once again that power plants are the number one source of the carbon pollution that drives climate change, churning out more than 2.2 billion metric tons of carbon dioxide to the atmosphere in 2011.

The new data confirm that cleaning up the nation’s fleet of power plants should be the centerpiece of President Obama’s actions to reduce the threat of climate change.

In his inaugural address two weeks ago, the president vowed: “We will respond to the threat of climate change, knowing that the failure to do so would betray our children and future generations.”

Power plants are far and away the number one source of carbon pollution, responsible for two-thirds of the 3.3 billion metric tons reported by all large industrial facilities, and for 40 percent of the nation’s overall CO2 emissions. (Overall U.S. emissions of CO2 and other heat-trapping pollutants total about 6.8 billion metric tons, including those from transportation, other industries, and smaller sources.)

Total power plant CO2 emissions in 2011 were down about 4.5 percent from 2010, reflecting the shift towards burning more natural gas and less coal (a trend that continued in 2012—see here, p.87—and will show up in the plant-by-plant pollution reports EPA publishes next year).

Renewables and efficiency are growing fast—renewable investments increased by 23 percent from 2010 to 2011 according to the Energy Information Administration, and electric efficiency program budgets, for example, rose from $2.7 billion to $6.8 billion between 2007 and 2011.

Our plan achieves huge health and climate benefits at surprisingly low cost, is fair and flexible for each state and power company, holds power bills down and triggers huge job-creating clean energy investments that can’t be outsourced.

The NRDC plan cuts overall power sector carbon emissions 26 percent in 2020 and 35 percent in 2025, from 2005 levels. Because of its fair and flexible design features, our plan achieves enormous climate protection and public health benefits worth $26-60 billion in 2020, at a reasonable cost of $4 billion.

You can check out which of the nation’s 1,594 power plants is in your backyard, and how much carbon pollution it puts out, using EPA’s handy map-based emission data website, which includes data from about 8,000 large facilities in nine industrial sectors.

You can search for power plants in your state or county, or look up any specific power station. You can see which states, which plants and which companies are the biggest polluters, and you can compare 2011 emissions with those from 2010, which EPA published last year. You can also look up the emissions of the other big polluters: oil and gas production facilities, refineries, chemical plants and other industries.

Just as examples, I’ve listed the top 20 states and the power plants that emit more than 10 million tons per year in the following two tables.

We have this invaluable “right to know” information because Congress, in 2008 legislation, directed EPA to collect carbon pollution data from every large industrial facility, and to make it publicly available in an easy-to-use form.

So, thanks to EPA’s greenhouse gas emission database, we know exactly where the carbon pollution is coming from. And following NRDC’s power plant plan, we know how we can cut it down to size.

President Obama said eloquently in his inaugural address that “our obligations as Americans are not just to ourselves, but to all posterity,” and he spoke of our duty to “preserve our planet, commanded to our care by God.”

Now, as he prepares his State of the Union address, we look to the president to launch specific plans to curb the carbon pollution from the power plant fleet, and from other big industries, using the laws Congress has already entrusted him to enforce.