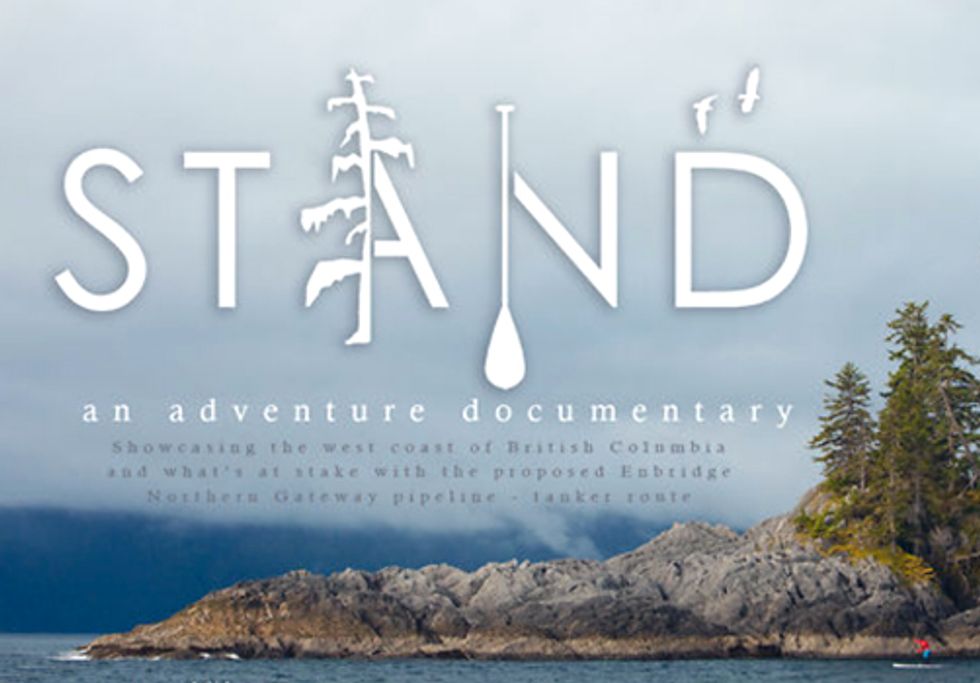 British Columbian filmmakers Nicolas Teichrob and Anthony Bonello are leading a grassroots campaign to protect BC's waters from Enbridge's proposed Northern Gateway Pipeline. In an effort to bring awareness to all sides of the pipeline battle, the duo documented the tanker route destined to carry diluted tar sands bitumen along rugged coastal shores if the pipeline is approved.

Concerns over the construction of the pipeline are only half the story, according to the film's trailer released last week. The other half begins where the pipeline ends, with pristine coastal waters and the life—both ecological and cultural—that depends upon it.

Following stand up paddler Norm Hann as he paddles the 350 kilometers that stretch from Kitimat to Bella Bella, the film, called STAND, showcases the region's biodiversity as well as its treacherous waterways. The documentary also tells the story of coastal communities through the creative protest of Bella Bella high school students and legendary surfer Raph Bruhwiler.

DeSmog caught up with Nicolas Teichrob and Anthony Bonello to learn more about their experience along the tanker route and inspiration for STAND.

What was the original inspiration for the project?

Anthony: I read about Norm Hann's paddleboard trips to the Great Bear Rainforest (GBR) in a magazine and when I went home and looked at his website, I learnt about Norm's StandUp4GreatBear SUP expedition along the proposed tanker route. That planted a seed for an environmental film. I called Norm and we had a coffee and he told me about the Bella Bella High School students making their own cedar SUP's [stand up paddleboards] and I knew then that we had a good story and a fresh angle to shine a light on this issue. When I floated the idea to Nic he was immediately interested and we were off. Personally, the inspiration for these films always comes from wanting to be out in our world and experiencing both the landscape and the people.

Nicolas: I had been thinking for a couple of years about working on a film that had a greater contribution to society other than pure entertainment. I have always been deeply passionate about the west coast and the ocean that provides us with so much, so when Anthony called me to see if I was interested in doing a paddle film, I was onboard right away.

Did you have any previous experience in the Great Bear Rainforest or Haida Gwaii? What was it like spending time in that part of the world?

What was it like meeting with local communities living on the front lines of the current battle over the Northern Gateway Pipeline?

Nicolas: It has been very interesting working with all these people who would be severely affected by a pipeline and tanker route. What I think was the most exciting thing to see was the unanimous opposition across the board to the proposed pipeline-tanker route, coupled with a keen interest in the work and stories we wanted to share.

What concerns did you hear from people in those communities?

Nicolas: That much of what they depend on for survival, will be destroyed and they will have to move. It is a very simple scenario, where hunting and gathering from the land and sea provides the vast majority of food for the year. The communities work to respect what the ocean provides, take what they need and eat what they take. All the stories of the past and present, and the culture they are of would be in jeopardy if their food source was destroyed.

Do most people feel like their voices are being heard in the fight to prevent the pipeline's construction?

Anthony: I was in Bella Bella for the Joint Review Panel hearings and spoke with Heiltsuk people during and after the hearings. Most felt it was a disgrace that they had to articulate why their home was their home despite living in their traditional territory now and 10,000 years ago. In short they felt their voices were not being heard but that they would proceed through the requisite channels.

Nicolas: The Gitga'at of Hartley Bay feel the same way as the Heiltsuk. The fact that the First Nations have to prove who they are is a big slap in the face. However, they were willing to go through with the process diplomatically.

In your opinion what does the construction of the pipeline mean for the Great Bear Rainforest and those who rely on the region's natural riches for their survival? Is this an argument over economy or is there more to it?

Anthony: I think the pipeline and tanker route has far greater implications than just those facing the GBR. In the face of First Nation opposition, provincial opposition, science and common sense, if this project goes ahead, it essentially sets a precedent for any type of proposal to go ahead in the future. That is the scary part for Canada and the world at large I think.

Nicolas: The GBR, fisheries, tourism and the west coast way of life would be threatened by a pipeline-tanker route. A fundamental problem in this consultation and assessment process is the lack of value put on nature and working with nature. The ideology of 'humans will conquer nature' is pushing the pipeline project, however, it simply doesn't make sense when you look at the greater scale of things in terms of time and space. A spill would likely affect the water, shores, and ecosystems from Haida Gwaii down through Vancouver Island. Fisheries and Coastal Tourism equate to 40,000+ annual jobs and $2 billion/year for BC, which is not reliant on oil supply, demand, and speculation, but rather a clean and healthy natural environment to work in.

If you crunch the numbers, there is no way this project makes sense for British Columbia. Even in a best case scenario, it will take away more than it provides. A worst case scenario would present BC with a $10 billion cleanup bill, a destroyed ocean environment, destroyed fisheries and tourism, and a lost First Nations coastal culture. That's a pretty bad case that is not an acceptable option for the sake of humanity and the globe.

What part of your journey so far has had the greatest impact on your personally?

Anthony: Spending time with the students building their boards. Seeing them create something with their own hands and then use it to discover the outdoors has been the highlight. They are really great young people and grew in confidence through that project.

Nicolas: Two things: 1) The ancient Haida totem poles, sites, and stories.  Haida Gwaii is filled with so much history, that just walking around old growth in the forest feels like a surreal experience. 2) The nasty weather changes that occur on the north coast. At the end of our Haida Gwaii expedition we had a day of total glassy water, not a breath of wind.  The next day it was blowing 56 knots (100km/h) and the ocean was chaos. Dangerous waters are ever present up there.

Were there any unintended lessons learned along the way?

Anthony: How truly rugged and wild BC's west coast is. I thought I had a sense before, but having traversed a good chunk of it this summer, it is totally wild.

How you can help
Anthony and Nicolas hope they can raise enough crowd-sourced funds to complete the film and ensure it is distributed to a wide audience. If you are interested in supporting the STAND project, visit their IndieGoGo page for more information.