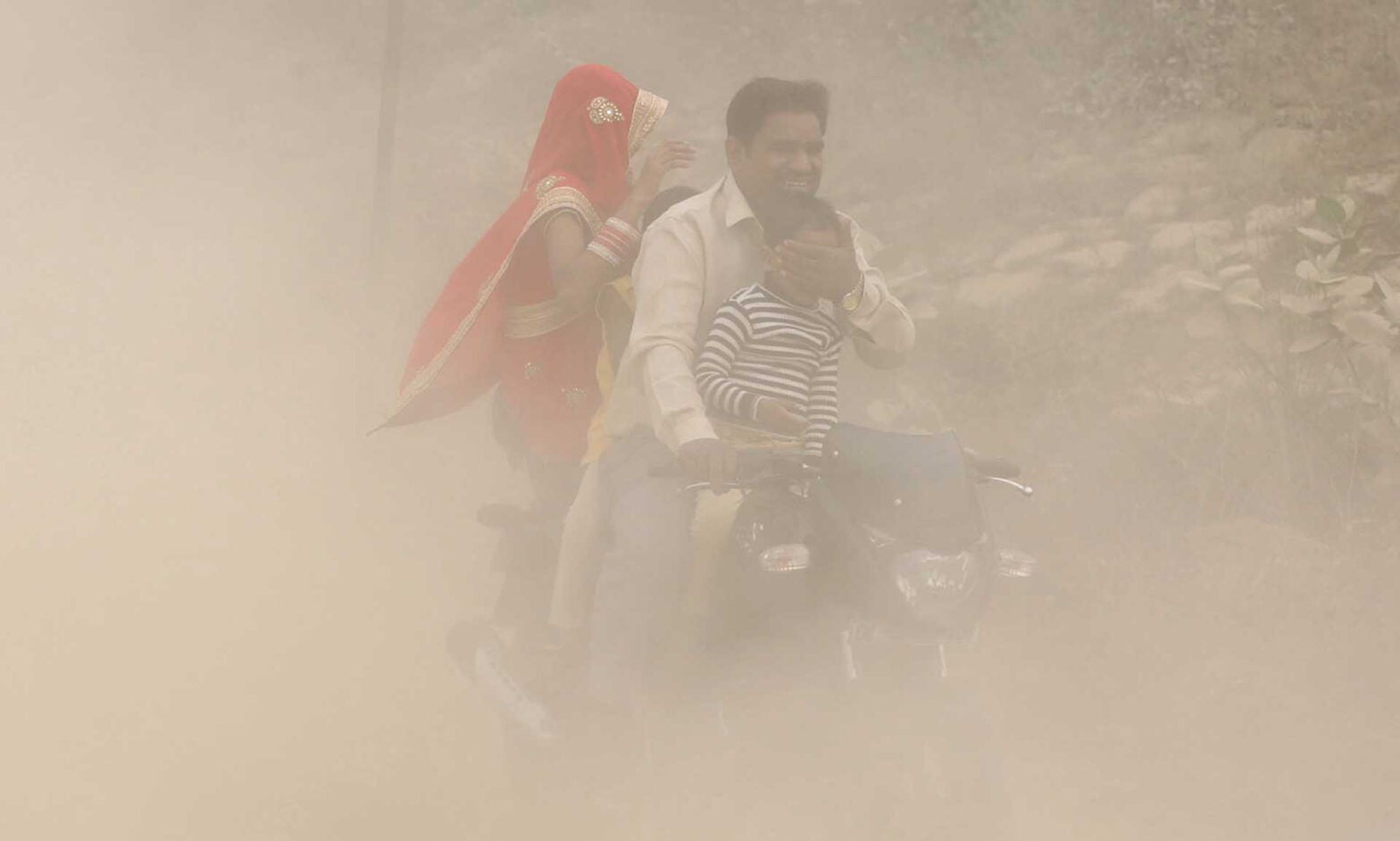 A family in Delhi ride through the thick smog. Harish Tyagi / EPA

Suffocating smog forced the Indian capital of New Delhi, a city of more than 21 million people, to declare a public health emergency on Tuesday.

As a thick grey haze settled on the city, the government announced Wednesday morning that schools would be closed for the rest of the week as air pollution worsened and criticism escalated over Indian government’s failure to curb pollution levels.

By Wednesday afternoon, the U.S. embassy air pollution tracker said the level of PM 2.5—tiny particulate matter that enter the lungs and bloodstream—reached 1010 AQI. Any PM 2.5 level from 301 to 500 is considered “hazardous” to the general population, according to the U.S. embassy tracker.

Pollution trackers are showing that smog has reached its most dangerous level of the year, making the air more detrimental to human health than smoking 50 cigarettes a day, according to health officials.

“Every year this happens during this part of year,” Kejriwal continued, referring to smoke caused by crop burning in the northern Indian states neighboring Delhi.

Delhi has become a gas chamber. Every year this happens during this part of year. We have to find a soln to crop burning in adjoining states

Each year farmers in the northern states of Haryana, Punjab and Rajasthan burn millions of tons of crop waste in October to clear the land for winter planting. An estimated 35 million tons of crops are burned every year in Punjab and Haryana, contributing to New Delhi’s smog.

Last November saw similarly high levels of pollution, the worst in nearly 20 years, which forced a million children to miss school and caused thousands of workers to report illnesses.

“Every possible step required to tackle the situation has been already identified, and the need of the hour is to put them into action,” federal Environment Minister Harsh Vardhan wrote on Twitter.

The air quality in New Delhi is likely to worsen in the coming days. A northwesterly wind is expected to blow in toxic smoke from burnt crops in Punjab and Haryana as farmers prepare for winter planting.

Emergency measures are now being considered, according to Delhi’s deputy Chief Minister Manish Sisodia. The government banned the entry of trucks into the capital and may suspend all construction activities if the pollution levels rise further.

In October, the Environment Pollution (Prevention and Control) Authority (EPCA) ordered the shutdown of diesel generators and a power plant. It also ordered that some brick kilns and trash burning cease.

On Tuesday, the EPCA also recommended raising parking fees for private vehicles by four times, inside the capital’s city limits.

A recent report by the Lancet Commission on Pollution and Health that looked at data from 2015 found that pollution led to 2.5 million deaths in India alone.

The report concluded that in 2015 pollution killed nine million people worldwide—about one in six deaths—three times more than AIDS, tuberculosis and malaria combined.

Of those nine million deaths, air pollution was linked to 6.5 million of them. The vast majority of these deaths occurred in developing countries.