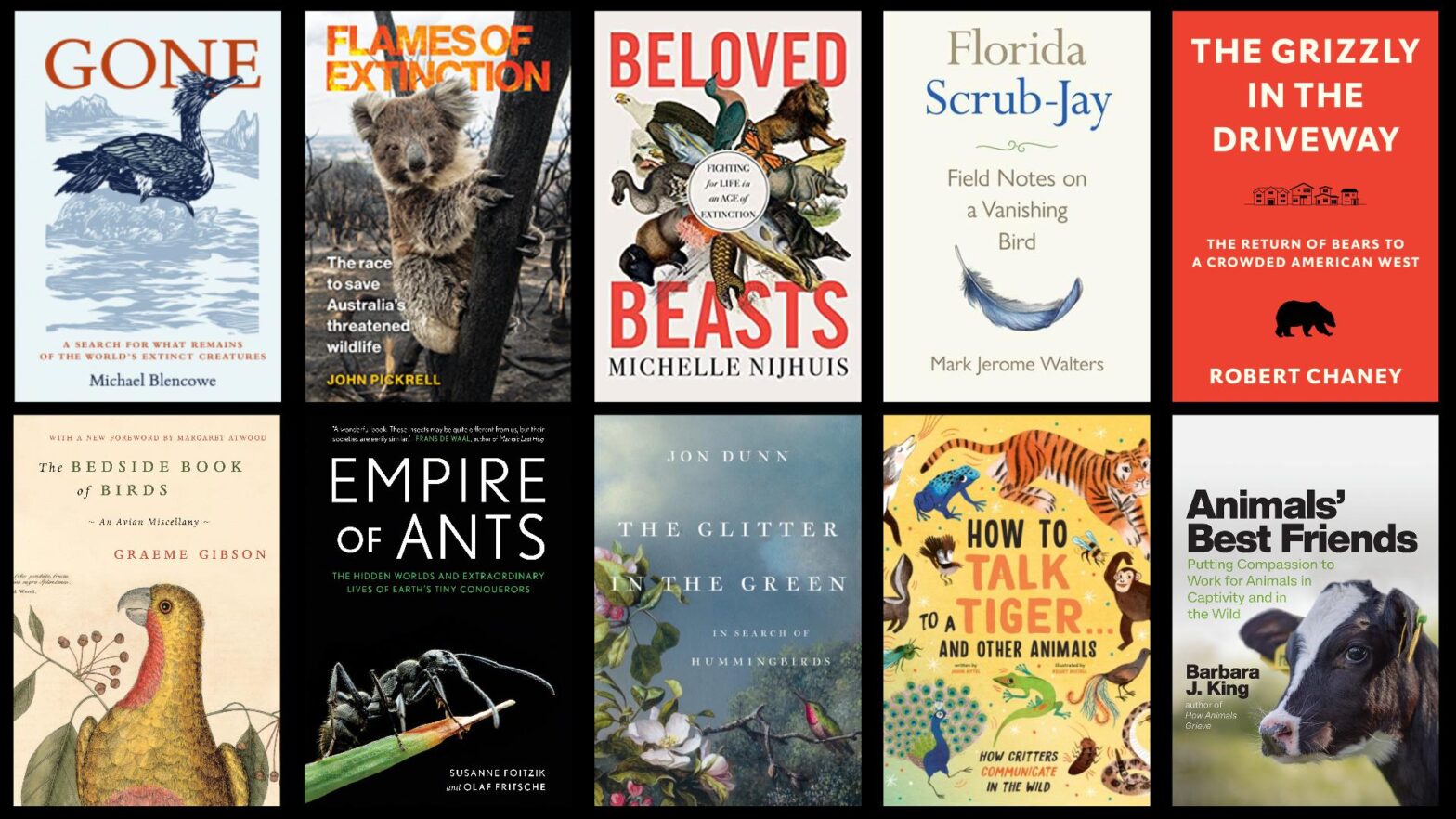 As I sat in a pharmacy chair for the required 15 minutes after my first vaccine dose, my mind turned to animals.

There weren’t any animals nearby, of course — the buzzing fluorescent lighting of the run-down drugstore wasn’t anyone’s natural habitat, including mine. And that very absence of visible sky and wildlife — a change from the past 15 months, much of which I’d spent watching the world go by through my home-office window — served to remind me how easily we can lose sight of it.

I returned home, rushed to the back window and the birdfeeders beyond, and randomly pulled a new book out of a pile of review copies. Sure enough, its subject was animals.

And it wasn’t alone. In recent months publishers have released a bevy of new books about birds, bears, koalas and other creatures. These hefty tomes do more than just celebrate our furry, feathery or chitinous friends; they also examine our relationships with them, for better or worse.

Here are publishers’ descriptions of 10 of the best new wildlife-related books of 2021 so far. The books come from a long list of celebrated authors, scientists and journalists and cover species from several continents. They’ll help give you a dose of the wild — and a window into other parts of the world — that will hold you over until it’s safe to travel again to see loved ones. Human and otherwise.

1. Animals’ Best Friends: Putting Compassion to Work for Animals in Captivity and in the Wild by Barbara J. King

An uplifting new book from the author of How Animals Grieve.

“As people come to understand more about animals’ inner lives — the intricacies of their thoughts and the emotions that are expressed every day by whales and cows, octopus and mice, even bees — we feel a growing compassion, a desire to better their lives. But how do we translate this compassion into helping other creatures, both those that are and are not our pets?”

2. The Bedside Book of Birds: An Avian Miscellany by Graeme Gibson

Margaret Atwood provides the foreword to this new edition of her late partner’s classic book.

“In this stunning assemblage of words and images, novelist and avid birdwatcher Graeme Gibson offers an extraordinary tribute to the venerable relationship between humans and birds.”

4. Flames of Extinction: The Race to Save Australia’s Threatened Wildlife by John Pickrell

Signs of hope amidst and after apocalyptic wildfires.

“In the early months of 2020, the world’s attention was riveted on Australia, where the nation’s iconic wildlife fought for survival in the face of unprecedented wildfires. Images of koalas drinking from firefighters’ water bottles went viral and became the global face of a catastrophe that would kill as many as three billion animals. Known as the Black Summer, the fire season was responsible for more wildlife deaths and near-extinctions than any other single event in Australian history. Flames of Extinction, written by a journalist at the heart of this news coverage, is the first book to tell the stories of Australia’s record-setting fires, focusing on the wild animals and plants that will be forever changed.” (Read an exclusive excerpt.)

5. How to Talk to a Tiger … And Other Animals: How Critters Communicate in the Wild by Jason Bittel; illustrated by Kelsey Buzzell

A kids’ book that’s about a lot more than growling.

“Ever wanted to talk to a tiger? Or chatter with a cheetah? Or yak with a yak? This book brings together a babble of more than 100 beasties and explores the amazing ways they talk to each other. From fish that fart to alligators that dunk to fire worms that flash, you’ll discover that wildlife have the strangest ways of sending a message…”

6. The Glitter in the Green: In Search of Hummingbirds by Jon Dunn

A worldwide travelogue examining some of the world’s most charismatic and mysterious migrators.

“Hummingbirds are a glittering, sparkling collective of over 300 wildly variable species. For centuries, they have been revered by Indigenous Americans, coveted by European collectors, and admired worldwide for their unsurpassed metallic plumage and immense character. Yet they exist on a knife-edge, fighting for survival in boreal woodlands, dripping cloud forests and subpolar islands. They are, perhaps, the ultimate embodiment of evolution’s power to carve a niche for a delicate creature in even the harshest of places.”

7. The Grizzly in the Driveway: The Return of Bears to a Crowded American West by Rob Chaney

Can we relearn how to live with returning megafauna?

“Montana journalist Robert Chaney chronicles the resurgence of this charismatic species against the backdrop of the country’s long history with the bear. Chaney captures the clash between groups with radically different visions: ranchers frustrated at losing livestock, environmental advocates, hunters, and conservation and historic preservation officers of tribal nations. Underneath, he probes the balance between our demands on nature and our tolerance for risk.”

8. Beloved Beasts: Fighting for Life in an Age of Extinction by Michelle Nijhuis

An illuminating history of the conservation movement.

“In the late nineteenth century, as humans came to realize that our rapidly industrializing and globalizing societies were driving other animal species to extinction, a movement to protect and conserve them was born. In Beloved Beasts, acclaimed science journalist Michelle Nijhuis traces the movement’s history: from early battles to save charismatic species such as the American bison and bald eagle to today’s global effort to defend life on a larger scale.”

A portrait of the last-ditch efforts to save the final few dozen birds of a critically endangered species.

“The only bird species that lives exclusively in Florida, the Florida scrub-jay was once common across the peninsula. But as development over the last 100 years reduced the habitat on which the bird depends from 39 counties to three, the species became endangered. With a writer’s eye and an explorer’s spirit, Mark Walters travels the state to report on the natural history and current predicament of Florida’s flagship bird.”

10. Empire of Ants: The Hidden Worlds and Extraordinary Lives of Earth’s Tiny Conquerors by Susanne Foitzik and Olaf Fritsche

“Inside an anthill, you’ll find high drama worthy of a royal court; and between colonies, high-stakes geopolitical intrigue is afoot. Just like us, ants grow crops, raise livestock, tend their young and infirm, and make vaccines. And, just like us, ants have a dark side: They wage war, despoil environments, and enslave rivals — but also rebel against their oppressors.”

11. Gone: A Search for What Remains of the World’s Extinct Creatures by Michael Blencowe

Examining the scars left behind on an emptying Earth.

“Inspired by his childhood obsession with extinct species, Blencowe takes us around the globe — from the forests of New Zealand to the ferries of Finland, from the urban sprawl of San Francisco to an inflatable crocodile on Brighton’s Widewater Lagoon. Spanning five centuries, from the last sighting of New Zealand’s upland moa to the 2012 death of the Pinta Island giant tortoise, Lonesome George, his memoir is peppered with the accounts of the hunters and naturalists of the past as well as revealing conversations with the custodians of these totemic animals today.”