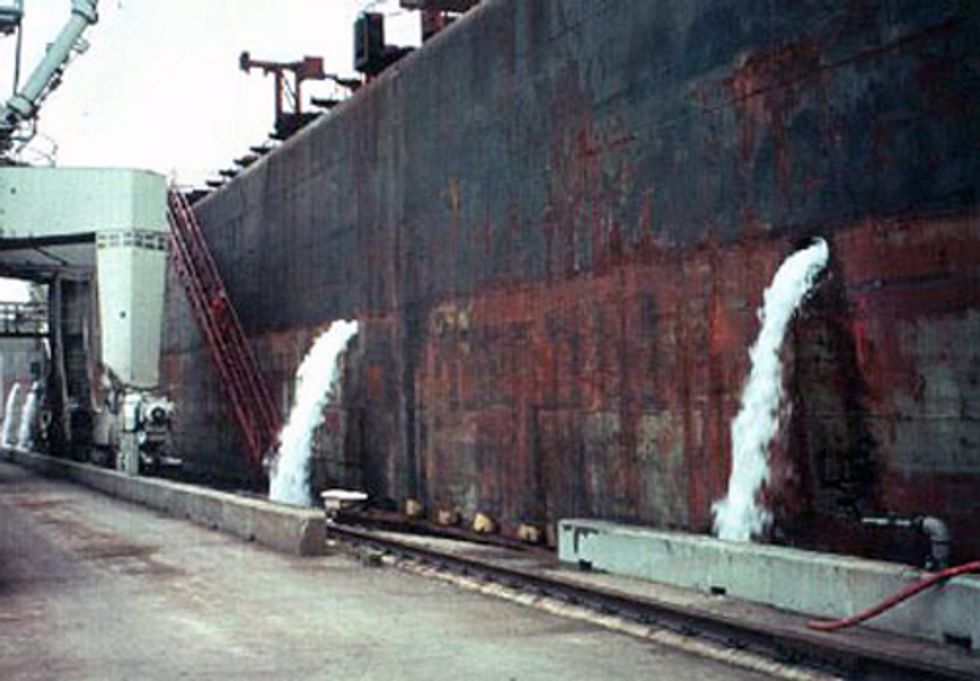 After more than a decade of debate, the Coast Guard is taking steps to address the scourge of invasive species that have been damaging America’s most vulnerable coastal and inland waters; from the Great Lakes to San Francisco and Chesapeake Bay. The most common source of introduction for these foreign creatures is water from the ballast water tanks used to stabilize large commercial vessels. In November the U.S. Environmental Protection Agency (EPA) proposed new Clean Water Act restrictions for the boats and on Friday, March 23, the other shoe will drop when the U.S. Coast Guard publishes a new rule that establishes the nation’s first ballast water discharge standards, meant to prevent invasive species from slipping into American waters. Unfortunately, environmental experts from a broad coalition of groups claim neither move is strong enough to solve the problem.

Jennifer Nalbone, campaign director for Navigation and Invasive Species with Great Lakes United, notes that the establishment of national ballast water discharge standards means that “commercial vessels will no longer be able to merely dump their ballast tank contents in the ocean, but must install technology to kill or remove unwanted invasive species carried in their ballast tanks.” Nalbone says that though the new national requirements need to be much stronger to prevent invasions, the Coast Guard’s rule marks “a starting point, a milestone that must be improved upon.”

The final Coast Guard rule is scheduled to hit the Federal Register tomorrow and stands as the conclusion of a 10-year rule-making process. The new rule will force the use of technology to kill or remove unwanted invasive species carried in their ballast tanks, a move long-sought by conservation groups across the country. However, there is significant disappointment in the standards to which that new technology will have to perform—a similar reaction to recently announced regulations from the EPA—which are seen as only a marginal improvement over current requirements that vessels flush water from the big tanks they used to steady themselves.

The Coast Guard regulations stand as a final rule, but Great Lakes groups are urging the states and EPA to strengthen the new national ballast water standards, shore up issues related to long timelines, and address other loopholes. Both the EPA and the Coast Guard have embraced the International Maritime Organization (IMO) standards, which are not strict enough to ensure invasive species are not introduced or spread throughout the nation’s waters. Both agencies allow ships to wait as long as 2021 before putting ballast water controls in place, and both fail to articulate a more protective standard to drive the development of treatment and technology, and better protect our nation’s waters.

“The Coast Guard rule will not protect U.S. waters from ballast water invaders,” said Marc Smith, senior policy manager for the National Wildlife Federation’s Great Lakes Regional Center. “The onus now rests with the EPA and states to shut the door on invasive species to protect our waters, jobs and way of life.”

"Getting treatment technology on board ships is a welcome step, but we're disappointed the Coast Guard is manning a slow boat toward a truly protective standard," said Joel Brammeier, president and CEO of the Alliance for the Great Lakes. “The U.S. Coast Guard and EPA need to drive innovation out of the gate to stop the economic and environmental ruin visited on the Great Lakes by invasive species.”

Also concerning to the conservation community are loopholes for ships only operating in the Great Lakes. While those boats, commonly referred to as “Lakers” are not responsible for the introduction of invasive species, which usually arrive in the ballast tanks of ocean-going vessels, they do move the new arrivals from Lake to Lake, speeding the invasion. The Coast Guard rule would not impact the Lakers.

Although the Coast Guard has issued a final rule, EPA continues to review ballast water standards under the CWA. In the coming months, states will have the opportunity to incorporate more protective standards into that permit.

“The states can still push for the stronger standards necessary to truly get the problem on their shores under control,” said Thom Cmar, attorney with the Natural Resources Defense Council. “The leadership of states such as California, New York and Michigan has helped drive the development of more protective standards at the federal level, but the Coast Guard rule still falls far short of the strong action that is needed to solve this multi-billion dollar drain on our Great Lakes and coastal economies.”

Invasive species introduced and spread via ballast water discharge are already wreaking havoc on the Great Lakes and other U.S. waters. A litany of non-native invaders—including zebra mussels, quagga mussels, spiny water fleas and round gobies—have turned the Great Lakes ecosystem on its head, altering the food web and threatening the health of native fish and wildlife. Non-native ballast water invaders cost Great Lakes citizens, utilities, cities and businesses at least $1 billion every five years in damages and control costs, according to research by the University of Notre Dame.

Across the country ballast-mediated invasive species range from Asian clams in the most invaded aquatic ecosystem on the planet, the San Francisco Bay, to the spotted jellyfish in the Gulf of Mexico.

The final rulemaking is available on the Federal Register by clicking here.