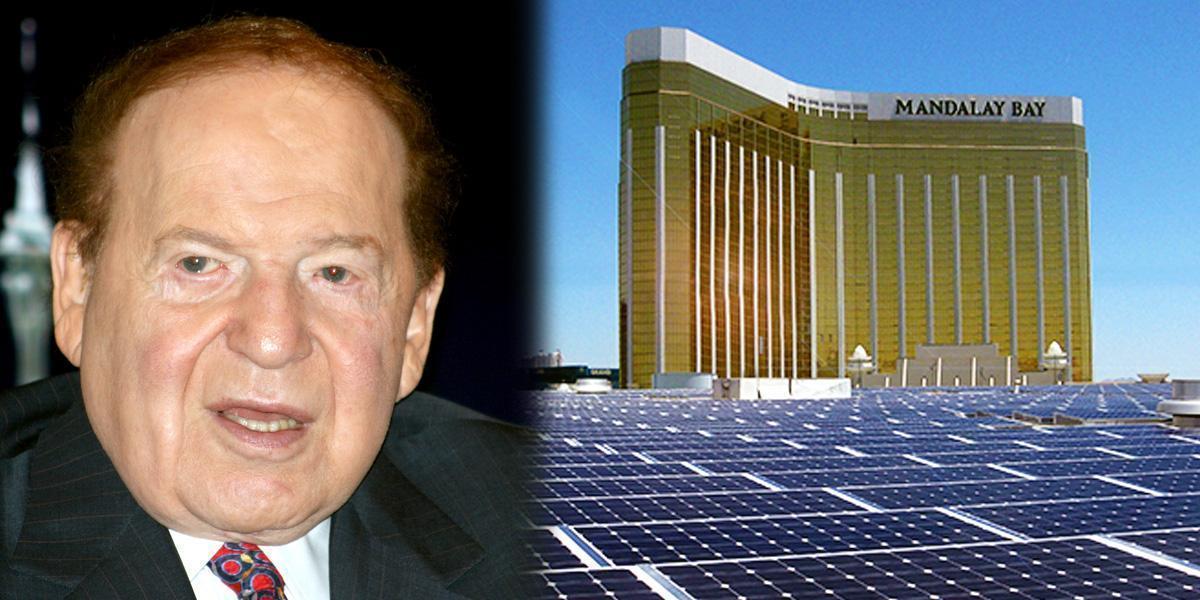 The Nevada Assembly passed a bill Wednesday that would dramatically increase the growth of renewable energy in the state, but Sheldon Adelson, the casino magnate and major donor to Donald Trump, is attempting to prevent the bill from becoming law.

The bill, AB 206, would ensure that Nevada gets 80 percent of its electricity from renewable sources by 2040. AB 206 passed the assembly with bipartisan support by a margin of 30 to 12, but it must now pass the Senate and be signed by Gov. Brian Sandoval.

Adelson owns the Las Vegas Sands casino giant, and is known in national political circles for the massive amounts of money he has plowed into Republican coffers; he spent $100 million in the 2012 election cycle, and then donated $35 million to the super PAC that supported Donald Trump’s general election campaign last year, plus another $5 million to Trump’s inauguration.

Given Adelson’s support for conservative politicians, clean energy supporters considered it a happy coup in 2016 when the Sands Corporation threw money behind a ballot initiative that would allow electric customers to defect from the monopoly utility NV Energy.

Sands was the biggest bankroller of the committee that backed the ballot initiative, Nevadans for Affordable, Clean Energy Choices. The company didn’t shy away from saying that their support for the initiative was motivated by a desire to use electricity from cleaner sources than NV Energy had on offer, garnering it fawning press in Nevada and globally.

“… The company maintains a strong desire to purchase and use the cleanest and most cost efficient energy available on the open market,” a Sands spokesperson said in a statement about its support for the ballot initiative.

Adelson Pulls a Bait and Switch on Renewable Energy

Now, however, it’s clear that while Adelson may want Sands to have the ability to defect from NV Energy, his motives were not as green as advertised last year.

Sands testified last month against AB 206, along with Wynn Resorts and the Nevada Resort Association (NRA). Why would Adelson, who spent all of 2016 saying that he wanted Sands to power with renewable energy, now be lobbying against legislation to move Nevada in that very direction?

The answer is likely that the bill language not only holds NV Energy to the increased renewable energy standard, but also any companies that defect from the utility, which could soon be Sands.

Adelson seems to want to maintain his company’s unfettered ability to buy not only renewable energy, but also as much natural gas as he wants, for as long as he wants, as well.

“We feel that this just isn’t the time to codify these mandates,” Sands lobbyist Chase Whittemore said about the bill, according to the Nevada Independent. NV Energy also fought the bill, introducing unsuccessful amendments to neuter it.

The lobbying against AB 206 by Sands, Wynn, the Resort Association and NV Energy did not seem to slow down the bill’s progress in the assembly, but the casino operators and NV Energy may have another trick up their sleeves: a new dark-money group is making a final two-week push to kill the bill in the Senate or on Gov. Sandoval’s desk. The Independent reported this week:

“A new nonprofit that does not disclose its donors plans to spend six figures in the last two weeks of the Legislature to try to defeat a renewable energy measure opposed by most gaming companies.”

The non-profit, called “Secure Nevada’s Future,” registered with Nevada as a non-profit organization in April, listing Texas as its qualifying state. Its list of officers is due May 31. The group seems to have a Facebook page which also became active in April.

As long as Secure Nevada’s Future refuses to disclose its donors, it’s impossible to know if Adelson, Wynn, NV Energy or some other mystery opponents of increased renewable energy is funding the effort, but longtime Nevada political reporter Jon Ralston wrote that “it’s a reasonable assumption that major businesses are funding the operation.”

Ralston reported that the one person publicly associated with the group as its executive director, Chris Young, used to work for Chris Carr while at the RNC; Carr now runs Wynn’s political operation. Carr had previously run a non-profit, “Engage Nevada” that received significant funding from Adelson personally, as well as from NV Energy.

While Adelson’s Sands Corporation tries to kill the strong renewable energy standard, another casino company, the MGM Grand Corporation, has actually shown that its commitment to renewable energy is more than just greenwashing. The company came out publicly in support of AB 206 earlier this week.

Like Wynn and Sands, MGM Grand is a member of the Nevada Resort Association—more than 10 of its properties are named as NRA member resorts, and MGM is listed on the NRA’s board, along with Wynn.

But despite MGM’s support for renewable energy growth, the NRA has sided with Wynn, Sands and NV Energy. The internal politics that drove that decision aren’t public, but it’s possible that some conflicts of interest among the NRA’s lobbyists may be a contributing factor.

Carson City is a small town, and lobbyists commonly represent multiple interests, but a review of lobbyists for NV Energy, MGM Grand, Wynn, Sands, the NRA and Caesars revealed that the only overlap was between NV Energy and the NRA, and that overlap was significant: Of 12 lobbyists listed for NV Energy, seven are also lobbyists for the NRA. Those lobbyists are Morgan Baumgartner, Pete Ernaut, Greg Ferraro, Lorne Malkiewich, Nivk Vassiliadis, Nicole Willis-Grimes and Paul Young.