The Federal Government Has Long Treated Nevada as a Dumping Ground, and It’s Not Just Yucca Mountain 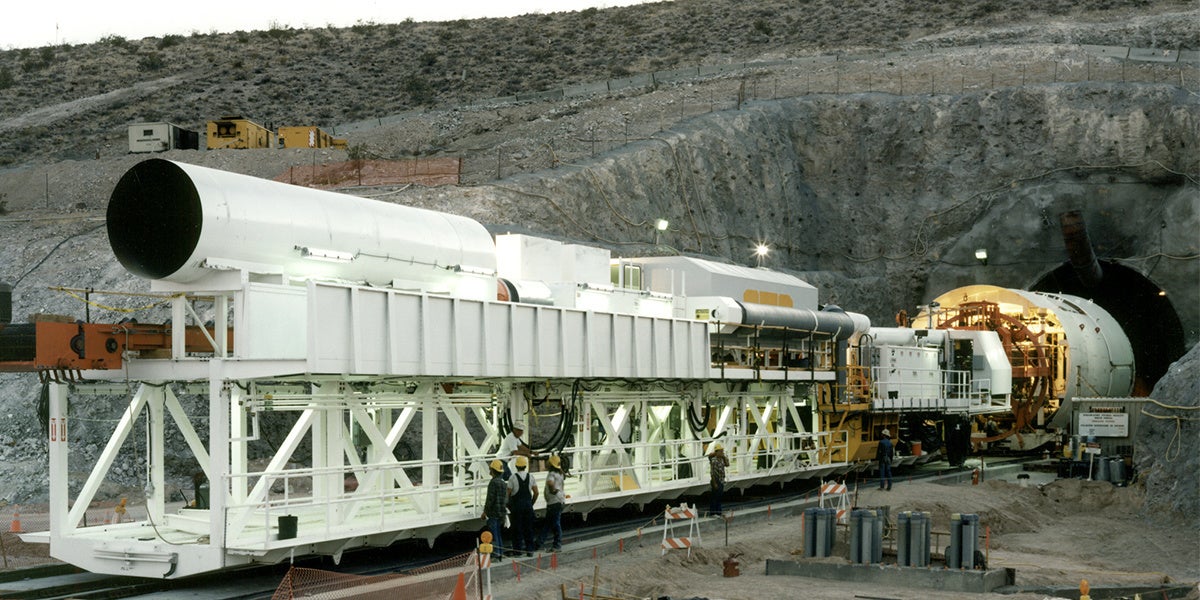 Nevadans can be forgiven for thinking they are in an endless loop of “The Walking Dead” TV series. Their least favorite zombie federal project refuses to die.

In 2010, Congress had abandoned plans to turn Yucca Mountain, about 100 miles northwest of Las Vegas, into the nation’s only federal dump for nuclear waste so radioactive it requires permanent isolation. And the House recently voted by a wide margin to resume these efforts.

Nevada’s U.S. Senators Dean Heller, a Republican, and Catherine Cortez Masto, a Democrat, have made their determination to block the latest Yucca proposal clear since the Trump administration first proposed resurrecting the project in early 2017.

While teaching and writing about the state’s history for more than 30 years, I have followed the Yucca Mountain fight from the beginning—as well as how Nevadans’ views have evolved on all things nuclear. The project could well go forward, but I believe that it probably won’t as long as there are political benefits to stopping it.

The Roots of Statewide Resentment

Two-thirds of Nevadans oppose this plan, according to a 2017 poll. The state’s experience with federal actions, including nuclear weapons and waste, may help explain the proposed repository’s long-standing unpopularity.

When Nevada became a state in 1864, it had to cede all claims to federal land within its boundaries. This left the federal government owning more than 85 percent of the state, reducing its potential tax base, and angering ranchers who have chafed at federal controls and fees for grazing their livestock ever since.

In 1873, the U.S. adopted the gold standard, reducing the value of silver—large amounts of which came from Nevada, known as the “The Silver State.” After the “Crime of ’73,” Nevadan state leaders dedicated themselves to restoring silver as an anchor of monetary policy, to no avail.

A series of boom-and-bust cycles ensued. Nevadans sought other means of prosperity, including some that other states shunned. In 1897, for example, Nevada hosted a world heavyweight boxing championship when other states refused.

A Magnet for Federal Projects

Tourism, however, became central to Nevada’s economy. So did federal projects, like Hoover Dam, which enabled southern Nevada to obtain most of the water it needs to survive.

World War II and the Cold War prompted numerous federal projects that benefited southern Nevada. A wartime gunnery school evolved into Nellis Air Force Base, and a magnesium plant led to the founding of the city of Henderson.

In 1951, seeking a cheaper domestic location for nuclear tests and research, the Atomic Energy Commission chose part of Nellis. Until 1963, the Nevada Test Site was the scene of about 100 aboveground atomic tests, with more than 800 additional underground tests to follow until nuclear testing ceased in 1992.

When aboveground testing began, Nevada cashed in. The governor welcomed the chance to see the desert “blooming with atoms.” Las Vegas marketed the mushroom cloud as a tourist attraction, as well as an atomic hairdo and cocktail. Atomic Energy Commission pamphlets and videos declared the tests to be harmless to those living nearby.

After learning more about the health dangers associated with nuclear fallout, Nevadans began to trust the government less. Repeated leaks and safety issues at the nation’s first low-level nuclear waste dump, opened in 1962 in Beatty, Nevada, eventually led to its closure in 1992.

Separately, some rural Nevadans came to resent federal regulations overall, especially after the federal government increased the Bureau of Land Management’s regulatory powers in the mid-1970s. Their Sagebrush Rebellion sought state control over almost all federal lands within Nevada’s borders and spread throughout the rural West.

As nuclear testing waned, the federal government scrambled to find somewhere to stow the spent fuel from nuclear power plants that had piled up in 39 states. In 1982, Congress approved a plan for the consideration of sites in Washington, Texas and Nevada.

But five years later, without getting conclusive findings based on those studies, lawmakers voted to consider only one site—Yucca Mountain, about 20 miles west of the dump for less radioactive nuclear waste in Beatty. The state’s leaders and pundits protested this “Screw Nevada” bill, which they ascribed to the state’s lack of political clout.

Around that time, Nevada created a new state agency to deal with nuclear issues and a state commission charged with warding off nuclear waste. A bevy of new state laws made it harder for federal officials and private contractors to obtain and pay for licenses needed for work on Yucca Mountain, and the state filed numerous lawsuits.

Senator Harry Reid, a Democrat first elected in 1986, crusaded against the measure. So did his Nevada colleagues in Congress.

To make their case, Nevadans pointed out the safety risks in moving nuclear waste along highways and railroads to their state, and how terrorists might take advantage of that opportunity. They cheered when a “West Wing” episode zeroed in on these dangers.

Reid eventually moved up through Senate ranks as one of the nation’s most powerful lawmakers, serving as the majority and minority leader. When former President Barack Obama took office and had to depend on Reid’s help, he ended funding for Yucca Mountain.

What to Expect This Time

Obama and Reid are no longer calling any shots, and Nevada’s congressional delegation is more junior than it’s been in decades. The overwhelming bipartisan vote in the House suggests that Democrats may be less interested in protecting Nevada than they were when Reid had so much power in the Senate.

But Heller is up for re-election this year, and his is one of the few Republican Senate seats that Democrats feel confident that they can win in the 2018 mid-terms.

If Senate Majority Leader Mitch McConnell decides that enabling Heller to claim that he saved Nevada from hosting the nation’s nuclear waste will help re-elect him, protecting the GOP’s slim majority, I think Yucca Mountain will be dead again. At least for the moment.